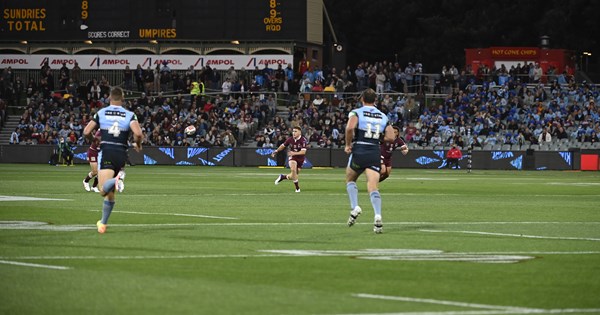 State of Origin returns to Adelaide in 2023

NSW Blues coach Brad Fittler has thrown his support behind the move to play the opening game of the 2023 Ampol State of Origin series in Adelaide, claiming it is the “fairest” way to decide the showpiece event.

The NRL announced today Game One would be held in Adelaide on 31 May, Game Two in Brisbane on 21 June, and Game Three in Sydney on 12 July. All three games have also returned to a traditional Wednesday timeslot, with the Sunday timeslot for Game Two being scrapped.

Fittler said he was “all for” spreading the Rugby League message in non-traditional states by bringing the best players to Adelaide, or Melbourne or Perth each year.

“It needs to be there – both sides have an away game and a neutral venue,” Fittler said.

“I think it’s the fairest way to do it and works for everything and everyone. We’ll deal with it, May 31 … can’t wait.

“While there may be advantages in having it in your home state, at the end of the day it’s a footy field and you’ve just got to get ready, bring your best team, and away you go.”

The Blues last played at Adelaide Oval in 2020 and although they did not get the result after going down 18-14, Fittler still took plenty of positives out of the game.

“We have work to do, and obviously when you get beat there’s that little extra bit of pressure,” Fittler said of opening two matches being at ‘away’ venues.

“Then the fact we’re going back to Adelaide where we were beat a couple of years ago… but when I broke that game down, we were very good the first half and then it got away from us.

“So, I feel comfortable going to any ground. But the second game in Brisbane does put a lot of responsibility on us to win the first in Adelaide.”

“It was at the end of the season, and we had some of the same absences we had this year with players like Latrell (Mitchell) and Tommy (Trbojevic) unavailable,” Fittler said.

“But they are all really good people, and generally this team has been together five years.

“We’ve won three series in that time so next year is important from the point of view that we keep the ball rolling.

“We have a great group of players that have shown that whether they win or they lose, they don’t give up.

“They respect who they’re paying for and their teammates. If they keep doing that, and the majority of the team stays together, it can only get better.”