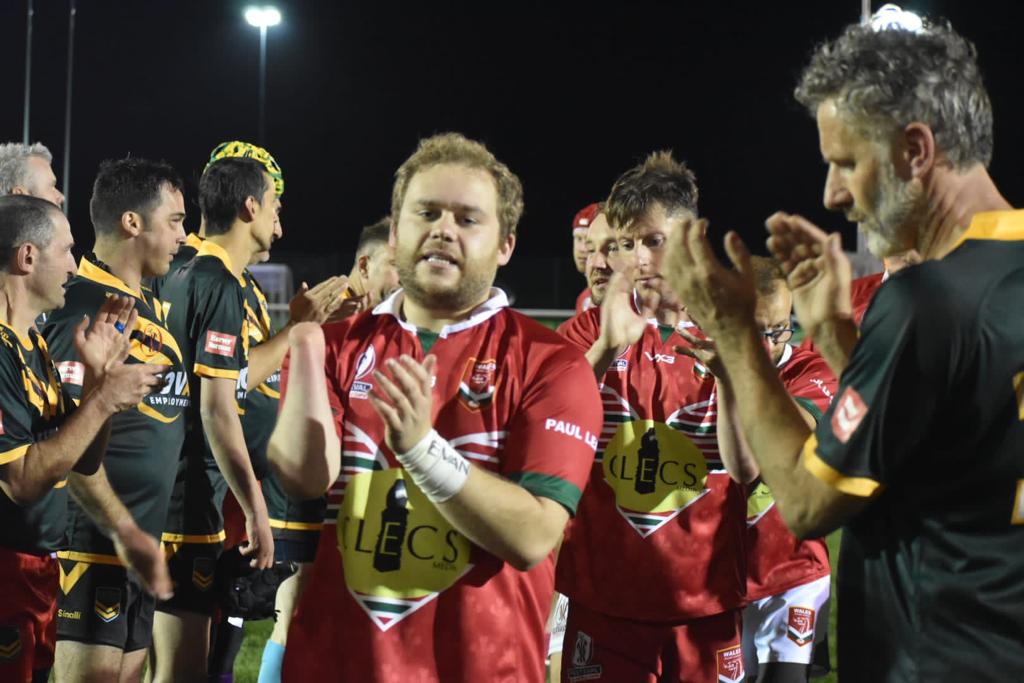 The match was a preview for Sunday’s third place play-off, where the two nations will go head to head again at Halliwell Jones Stadium.

Wales made a promising start with Leif Thorbroe and Chris Young showing up well and making fine early runs that led to Dan Shaw scoring a great try under the posts which was converted by Paul Jones.

The Welsh continued to drive forward and following a powerful Chris Spriggs run, Leif Thorobroe ran in under the sticks to score a super try. Paul Jones kicked the conversion.

In a fast-paced first period, it was the Welsh dominating play but Australia fought back into the game with a fine steal from Adam Hills driving the Aussies forward. However, a fine try by Morgan Jones put the Welsh up to 16 points at mid-point in the first half.

Then on 20 minutes, following some end-to-end play, Adam Hills finished off a clean Australian break scoring a try close in.

In the final minutes, it was the Australia who pushed forward again with Bryce Crane going over for a try with captain Stephen Hendry converting to leave the game at 16-10 and very much in the balance after an exciting first period of play.

The second period saw a fast start from the Welsh with Justin Martin and Chris Spriggs leading the line and soon Gareth Sullivan scored with a fine break that Morgan Jones converted well from wide out.

Australia came back yet again through another Bryce Crane try, well converted by Stephen Hendry to make the score 22-16. However, the Welsh were determined and an outstanding break by Chris Young saw him score again, and soon after Leif Thorobroe sealed a fine performance with another slick try in the far corner. In a match played at breathtaking pace, Australia then put together a great set of passes to see Bryce Crane burst over in the corner.

But soon after, Wales were again driving forward and when Chris Young dived on a great chip kick, the score was 34-20 and a hard-fought victory was complete.