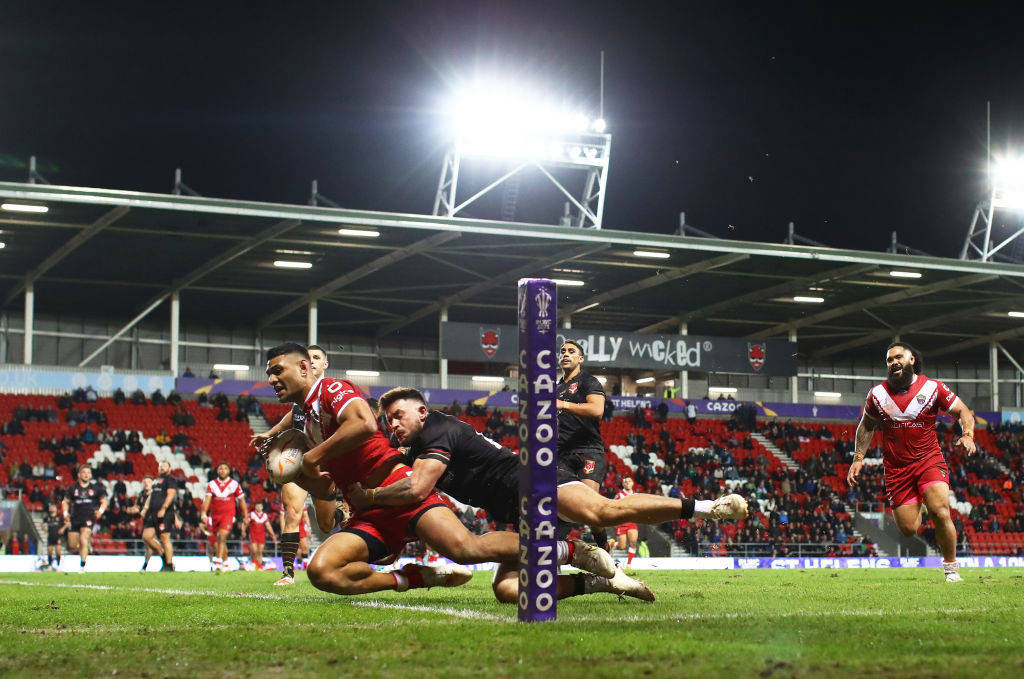 Daniel Tupou scored a hat-trick as Group D favourites Tonga earned their second success of the Rugby League World Cup with a 32-6 victory over Wales.

A trio of scores for the right wing took his international tally for Tonga to nine with the result at the Totally Wicked Stadium in St Helens leaving his side perfectly-placed to qualify for the quarter-finals.

After Kyle Evans’ surprise opener for Wales, Tupou got Tonga on the board before tries from Keaon Koloamatangi and David Fifita in the final minutes of the first half put the 2017 semi-finalists in control.

After a full five minutes of defence to open the game, Wales slowly brought themselves back into the match with centre Dalton Grant held up over the tryline.

Their hard work soon earned the opening score as Siosifa Talakai lost the ball in midfield allowing Josh Ralph to pick up and release Evans to sprint clear of the Tonga defence and run in under the posts.

Matty Fozard’s conversion extended the lead but Kristian Woolf’s men, who had struggled in attack during the opening exchanges, ran a simple set piece to send Tupou over in the left corner.

Two tries in the closing three minutes of the first half went a long way to securing Tonga’s second win of the tournament as Fifita ran hard and straight to pile over from close range.

And with Welsh legs tiring, Koloamatangi found a big hole in their defence with Tui Lolohea adding his second conversion of the night to give Tonga a ten-point lead at the break.

Tonga needed just seven second-half minutes to extend their advantage as Niu stepped beyond three Welsh defenders before diving over and putting the result beyond doubt.

Tupou got his second on 60 minutes before more slick Tongan hands put the wing into acres of space allowing him to dive over in the corner for his third of the night to complete his player of the match display.

Wales have now lost their last nine games against teams from the southern hemisphere, their last win coming against Papua New Guinea, their next opponents, in 2000.