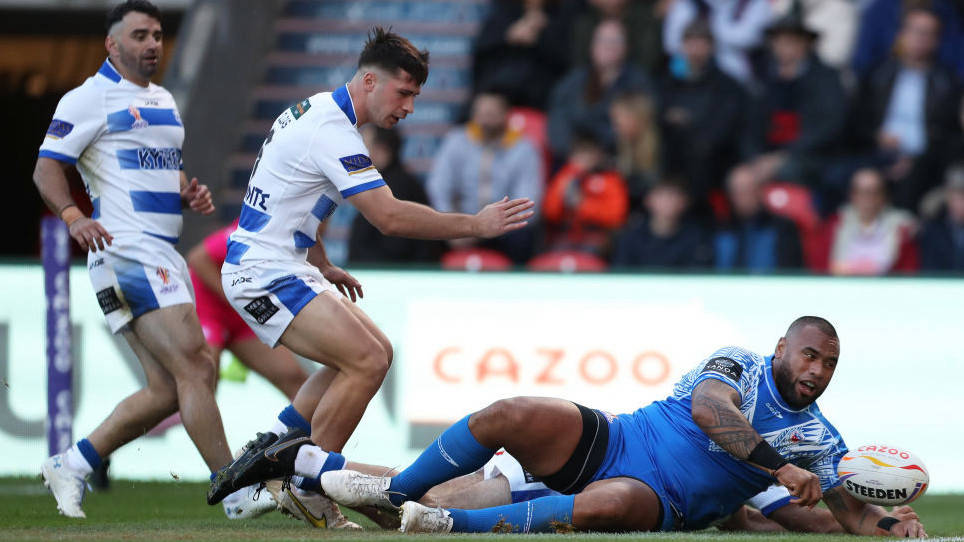 Samoa back on track with big win over Greece

Matt Parish’s side had a point to prove following their heavy defeat against England in Round 1 and needed just 58 seconds to open the scoring through Brian To’o.

Luai dictated play throughout and was one of 10 Samoans to ultimately add their names to the scoresheet, Danny Levi, Chanel Harris-Tavita and Tim Lafai each crossing for doubles in a one-sided encounter.

Lachlan Ilias sparked jubilant Greek celebrations with their only try of the night but the final quarter-finalists from Group A will now be decided when Samoa play France next Sunday.

The tone for the evening was set inside the opening minute as To’o claimed a high ball and went over in the corner before Samoa captain Paulo, who has only scored 12 tries in his NRL career at Parramatta Eels, charged over just three minutes later.

Teenager Siteni Taukamo, who scored Greece’s first ever World Cup try in Round 1, showed his defensive mettle with a try-saving tackle deny Jaydn Su’a and the Titans continued to dig in, Chaise Robinson and Billy Magoulias forcing Stephen Crichton into touch inches from the line.

But there was no stopping Levi in the 16th minute when he was fed an offload by Luai and touched down under the sticks.

Chanel Harris-Tavita, in for the suspended Anthony Milford, broke through for Samoa’s fourth having been set up by Luai and Royce Hunt was next to continue.

Luai got in on the act eight minutes before the break following Lafai’s line break, though the score needed verification from the video referee to confirm the Penrith Panthers ace hadn’t slid over the dead ball line.

Lafai went over the line himself before the break but Greece were quickest off the mark after the restart, Taukamo breaking through the Samoa line and feeding Ilias who chipped the ball over the top and was on hand to receive the offload from Jake Kambos for an unconverted score.

Conceding jolted Samoa into life and they quickly hit back as Fa’amanu Brown, Crichton, Harris-Tavita and Feagai all crossed within the space of 11 minutes.

A superb tackle from Jonny Mitsias denied Feagai his second but Levi and Lafai completed their own try doubles in the final 10 minutes as Samoa wrapped up a morale-boosting victory which sets them up nicely for next weekend’s winner-takes-all clash.