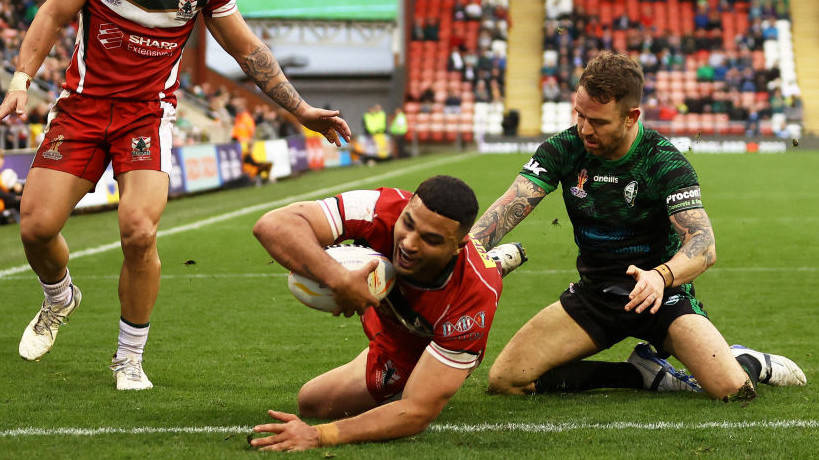 Lebanon up and running with win over Ireland

Lebanon’s half-back pairing were on fire as the Cedars defeated Ireland 32-14 for their first win of the Rugby League World Cup 2021.

Brad Morkos extended the Cedars’ lead before two tries from Louis Senior either side of half-time gave Ireland slim hope.

Elie El-Zakhem and Abbas Miski made sure of Lebanon’s second-ever win at a World Cup and ensured the Group C battle for the quarter-finals would go down to the final round.

Lebanon dominated possession in the early exchanges, with Moses held up on the try line before the Cedars benefitted from numerous Ireland infringements.

Their pressure was eventually converted into points as Moses kicked a penalty following a below-the-knee tackle.

The Cedars then crossed for the first try of the game, working the ball left to Rajab who deftly passed to Robinson to dot down for his third score against Ireland.

The Wolfhounds had no chance to respond from conceding their first try of the tournament as slick passing between Rajab and Moses set Kiraz on his way to the line.

With half an hour gone, Ireland were struggling to get out of their own half, a short goal-line dropout backfiring as Josh Mansour collected and sent a pass over the top to Morkos who moved Lebanon 20 points ahead.

Luck was not on Ireland’s side either as they saw their first trip over the line not given due to a knock-on by Harry Rushton in the build-up.

Senior gave them hope with three minutes of the half remaining, Keary’s looping pass finding him with just enough room to go over in the corner and cut the lead to 14 at the break.

A melee after the hooter saw Jalal Bazzaz and Robbie Mulhern sent to the sin bin and Senior scored the first try of the second half having been found well by Joe Keyes, Ed Chamberlain adding the extras to move Ireland to within 10 points.

Lebanon responded in emphatic fashion, Moses – who pulled the strings in the middle of the pitch throughout – working the ball out wide through Mansour to send El-Zakhem over in the corner.

The Cedars threatened to run away with proceedings as Miski scored his 12th try in a Lebanon shirt, collecting the ball on the right and dotting down just before he was tackled into touch.

Ireland’s challenge got even harder as Liam Byrne was sent to the bin for a late challenge, Moses adding insult to injury with the penalty, and Chamberlain’s late try provided nothing more than a positive note for the Wolfhounds to take in to their game against New Zealand next Friday.