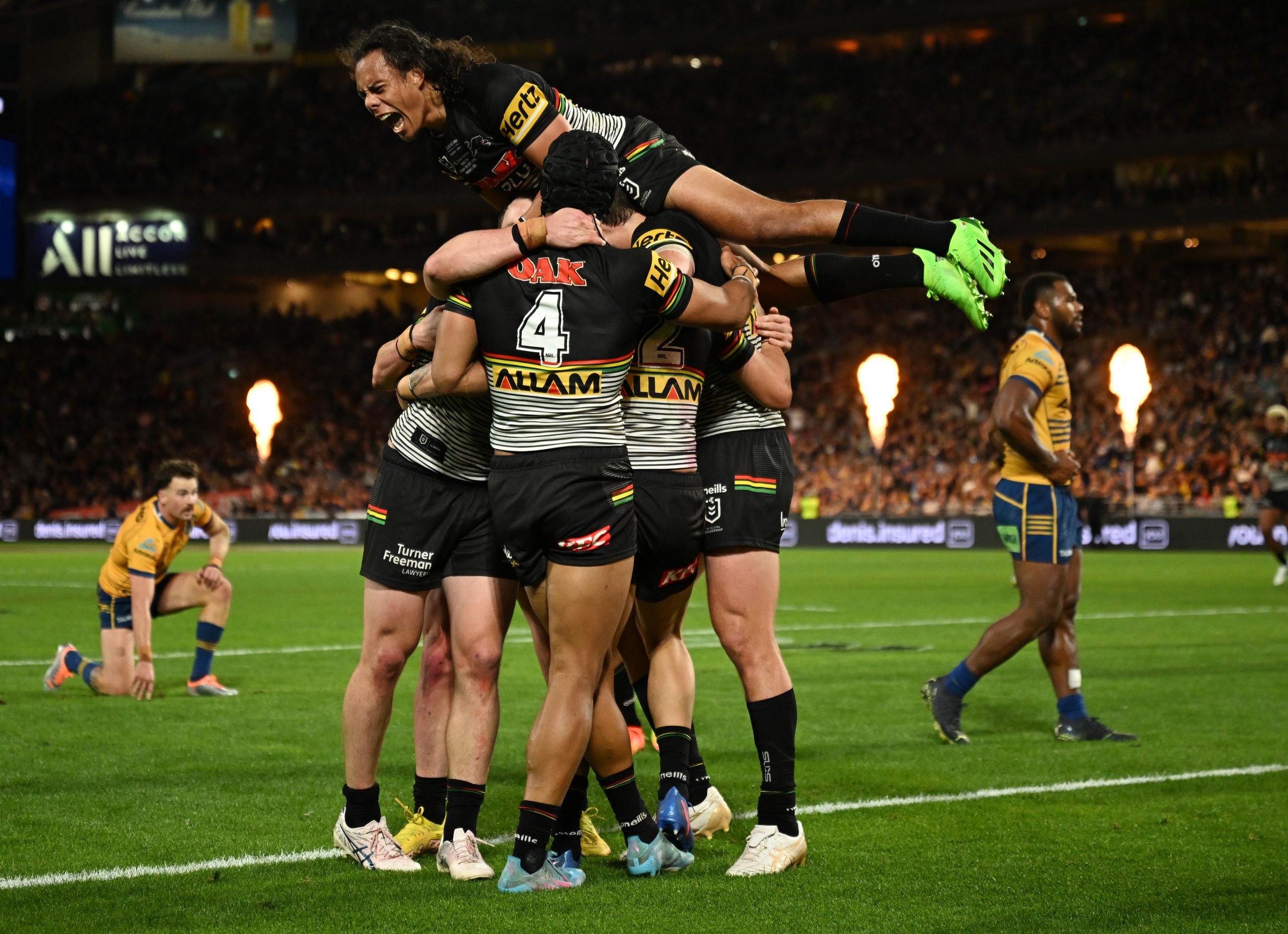 The Penrith Panthers have converted three years of dominance into back-to-back premierships with a clinical 28-12 dismantling of Parramatta at Accor Stadium on Sunday night.

With Dylan Edwards (277 metres), Brian To’o (299 metres) and Nathan Cleary delivering command performances on the game’s biggest stage, the Panthers became the first team since the Roosters in 2018-19 to win consecutive premierships.

After a physical opening the Eels tried an early trick shot when Dylan Brown kicked ahead early in the tackle count for Mitch Moses to chase in the eighth minute but Brian To’o covered up well.

Four minutes later it was the Panthers who struck first through centre Stephen Crichton, who took an inside pass from Edwards 25 metres out and turned on the jets to score despite the last-ditch effort of Reed Mahoney and Reagan Campbell-Gillard.

Winger To’o then finished off a slick left side in the 18th minute as the Panthers stretched their lead to 10-0.

With the Eels looking rattled, skipper Clint Gutherson put a short dropout out on the full and Cleary kicked the penalty goal for 12-0.

Relentless pressure from the premiers came up trumps in the 28th minute when Cleary put in a pinpoint grubber for Scott Sorensen to score just his second try of the season. Cleary converted and the Panthers were rocking at 18-0.

Two minutes before the break Viliame Kikau went within a whisker of scoring Penrith’s fourth when he chased a Jarome Luai grubber but Waqa Blake came up with a trysaving play when he knocked the ball dead.

A penalty against Ryan Matterson for a crusher tackle in the opening minute of the second half put the Eels on the back foot before a dropped ball by Blake compounded their woes and To’o capitalised with his second try of the night to make it 22-0.

Some slick ball movement by the Eels looked to have opened the door for Maika Sivo to grab their first try of the decider but a last-ditch tackle by Crichton denied the Fijian flyer.

A clever cross field kick by Mahoney opened the door for Bailey Simonsson to race into the back field in the 58th minute but the Eels centre was cut down by Dylan Edwards in a classic cover tackle.

Charlie Staines then finished off great lead-up work by Isaah Yeo, Cleary and Edwards to score and Cleary’s conversion made it 28-0.

Cleary went within inches of a try in the 69th minute but lost the ball just short as the Eels clung on grimly despite the scoreline against them.

Eels skipper Gutherson was rewarded for a couraegous effort when he grabbed a consolation try in the 77th minute and Jake Arthur also crossed late but the night belonged to the Panthers.

The Panthers have become the first team in history to win the Jersey Flegg, SG Ball, reserve grade (NSW Cup) and first grade premierships in the one season, confirming their status as the modern masters of rugby league.