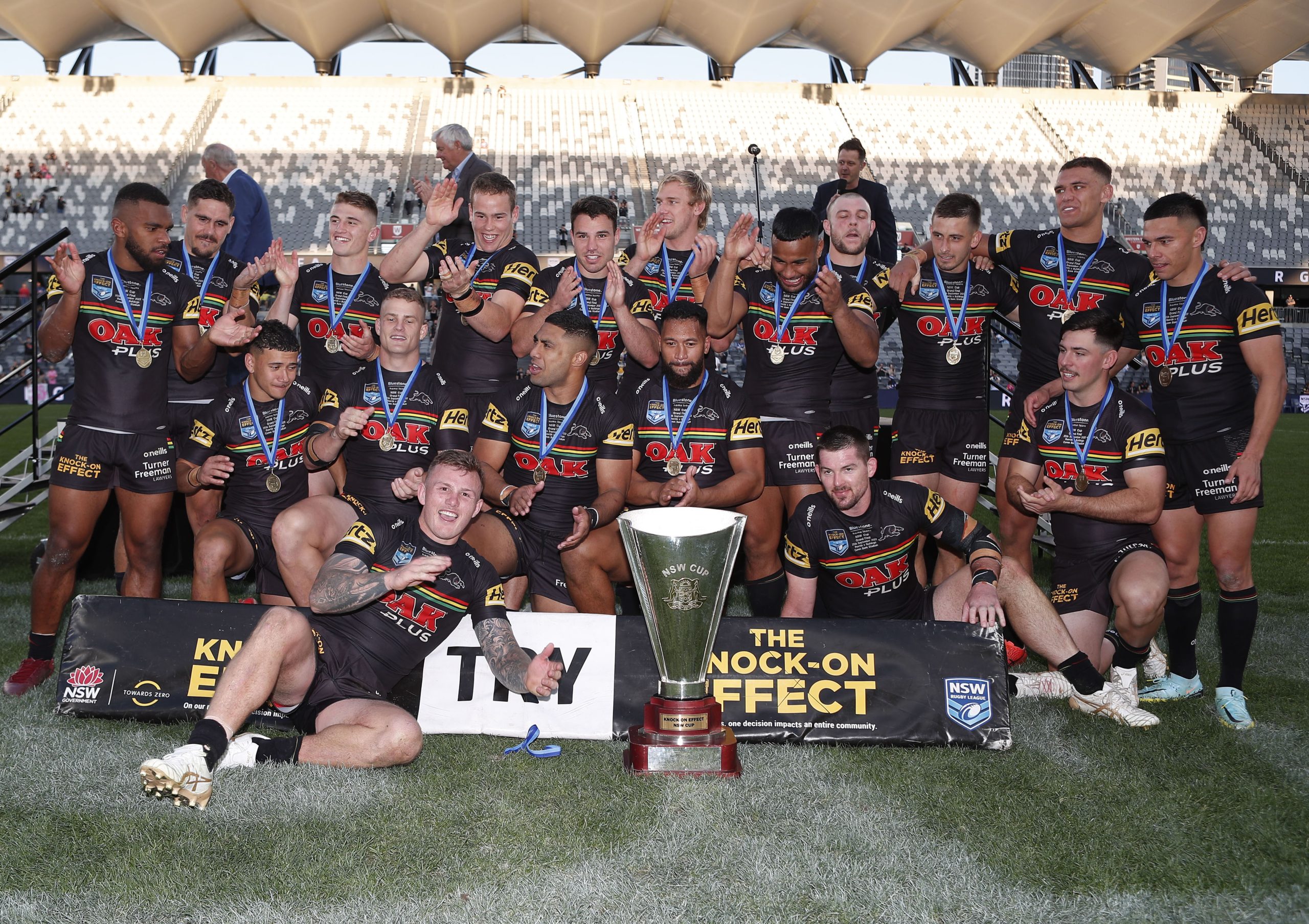 A four-decade record has now been equalled with the Penrith Panthers scoring a heart-stopping 29-22 win over the Canterbury-Bankstown Bulldogs in The Knock-On Effect NSW Cup Grand Final, earning the club a little piece of NSWRL history.

Not since the Balmain Tigers in 1982 has one club won the SG Ball Cup, Jersey Flegg Cup and NSW Cup in the same year.

Tit-for-tat tries in the second half of the NSW Cup decider kept the crowd of 6,210 on the edge of their seats, including the NRL squad who had turned up in support after beating South Sydney to get to advance to the NRL Grand Final.

A win by Ivan Cleary’s men next Sunday would give the club four victories from as many Grand Final appearances in 2022.

“It means so much to be in a club like this,” said Jack Cole, one of the four Panthers try-scorers today and the NSWRL Jersey Flegg Cup Player of the Year at the Brad Fittler Medal a fortnight ago.

“If I hadn’t been at a club like Penrith I wouldn’t have been able to achieve something like this.

“It’s been a whirlwind of a year and this sums it up pretty much,” said Cole, who also made his NRL debut in 2022.

The Panthers had 12 players in today’s NSW Cup win, who had played NRL this year including hooker Soni Luke, winning Player of the Match for setting up two tries and scoring one himself.

The lead changed three times in the opening half as the pendulum swung back and forth.

But a 60-metre runaway try to Cole, off a loose Brandon Wakeham pass, gave Penrith impetus into the break.

A Sean O’Sullivan field goal at the halftime hooter put the Panthers ahead 17-6.

It was O’Sullivan’s floating pass over the heads of two teammates that put Sunia Turuva over for the opening try in the seventh minute.

The Bulldogs responded six minutes later with the usual suspects – a Wakeham corner kick for his winger Jayden Okunbor – to put Canterbury-Bankstown in front.

Then it was the Panthers’ time to grab back the spotlight when Luke produced his 20th try assist of the season, shuffling a kick through the defensive line for Kurt Falls.

In the second half, momentum swung again.

Turuva looked to have his double for the Panthers in the south-east corner but the video referee ruled an obstruction.

Off the penalty to get them downfield, Bulldogs scored in the next set with five-eighth Khaled Rajab kicking ahead for centre Declan Casey to narrow the gap to 17-12.

Off back-to-back penalties, Okunbor grabbed his double, and despite Wakeham missing the sideline conversion, the Bulldogs were breathing down the Panthers’ necks at 17-16.

But the Bulldogs relaxed too quickly and Luke barged over near the posts for one of the easier tries of the afternoon. Falls converted and the screws had been re-applied by Penrith, leading 23-16.

Then Turuva did get his second just a few tackles after his own barging run downfield got the Panthers in perfect position. Falls conversion from the sideline could have been heard back in Penrith as the Panthers put themselves in the box seat.

Topine looked to have scored his second with two minutes left on the clock, but the video referee overruled – claiming Okunbor had propelled the ball forward.