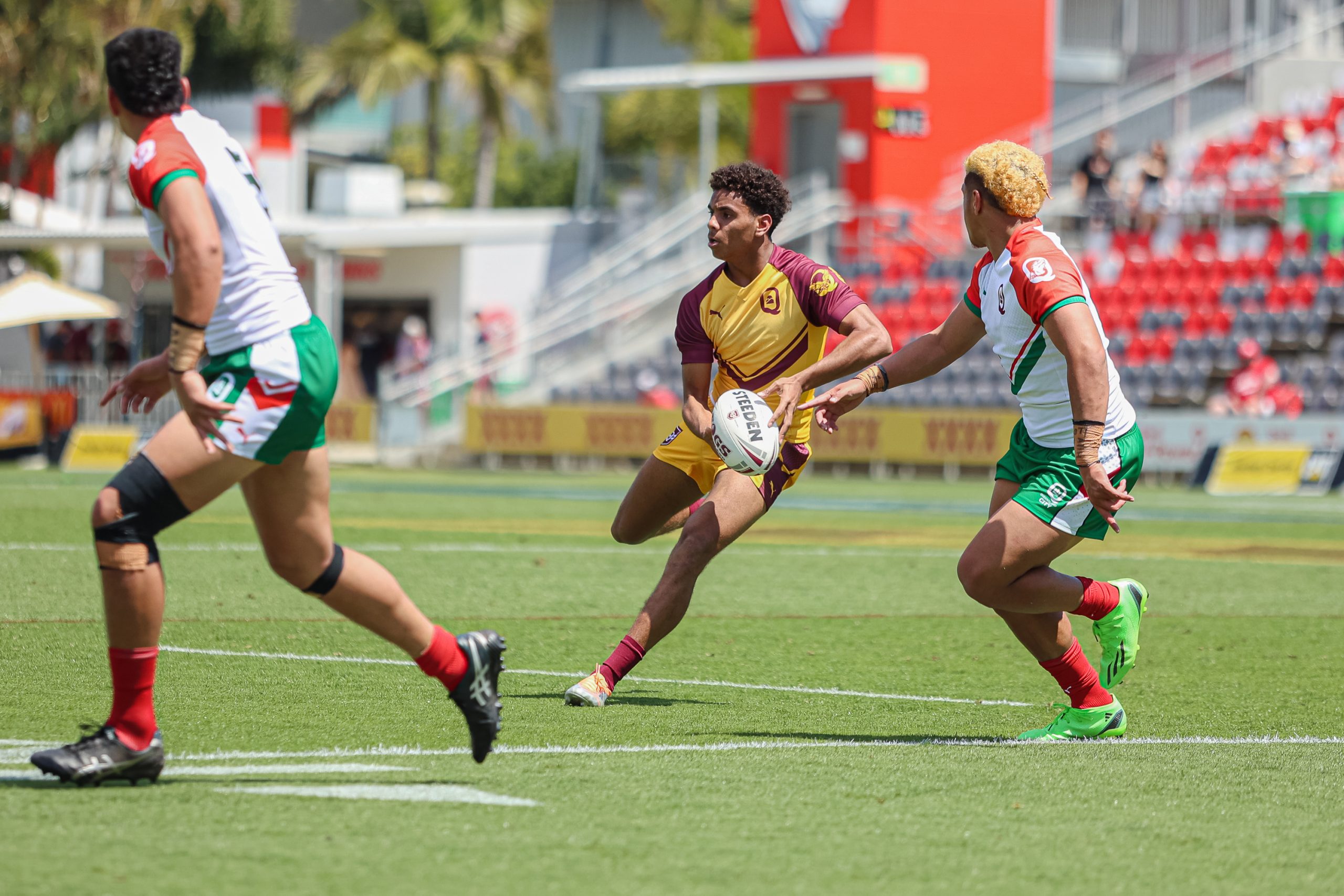 Queensland Under 17 Country Boys ran away with a strong victory in their representative match against City, with prop De La Salle Va’a and Rayzarlin Pearson both scoring doubles.

In a seesawing game, Country were able to get on the board first when five-eighth Lyhkan King-Togia produced a great run out of nothing, busting through tackles before flinging the ball backwards for fullback Muta Brown to scoop it up and open the scoring in the sixth minute.

City defence stiffened when Country twice deployed their right-hand side attack, but on both occasions was held up.

However, they went the old fashioned route to the open the scoring, changing direction to their left, and finding a hard-charging Va’a who crashed over to extend the lead.

With 16 minutes to go in the half, City prop Michael Waqa responded in kind with a powerful run of his own close to the line, getting the ball down for the first points in the half for his side.

As the half wore on, errors started to creep into the games of both sides, with neither able to fully execute their attacking plays or make the most of their opportunities.

The City side were able to get their second try however with just under four minutes left in the half after stretching the Country defence on their edge, before throwing the ball back inside to find halfback and captain Stanley Huen did his best prop impression and tucked the ball under his arm and ran straight and hard to the line, slamming the ball down to score. Keahn Skipps slotted his second conversion for the day to bring the scores to 12-12.

However, Country were able to sneak ahead at the break thanks to a penalty goal which was successfully made by Kai Simon to head to the sheds with a 14-12 lead.

Multiple errors to Country to start the second half gave City the chance to post the first points of the second half, and they took their opportunity, with centre Devonte Vaivela showing his strength to free his arm and score the opening points of the half, with Skipps adding the extras for an 18-14 lead.

City went further in front with a penalty goal, however Country were right back in the game when Va’a charged in for his second try of the match in what was a close resemblance to his first, with Simon’s successful conversion seeing the scored levelled again at 20-20.

Brown made another break for Country – and then King-Togia followed up and was held down, leading to a City getting sin binned.

Country made the most of the extra player with Pearson over in the left-hand corner to break the deadlock. Country went further in front when Xavier Kerrisk went in untouched from dummy half as the pressure of having to do so much defending told on City.

It was back-to-back for Country as Pearson streaked away and ran the length of the field to post is double and to give his side a 38-20 win.

Speaking after the match, captain, Jamal Shibasaki said he was happy with the result and was happy to see his speedy backs unleash as well following a tight opening to the match.

“It was excellent, could not have asked for a better outcome,” Shibasaki said.

“The Country boys come from all around Queensland, we came together, we only had a week to spend time with each other but I think it turned out very well.

“We were lucky enough to get that penalty and kick the goal before halftime so that was pretty good.

“Shout out to Rayzarlin Pearson, Palm Island Barracudas, he was our Ray.”