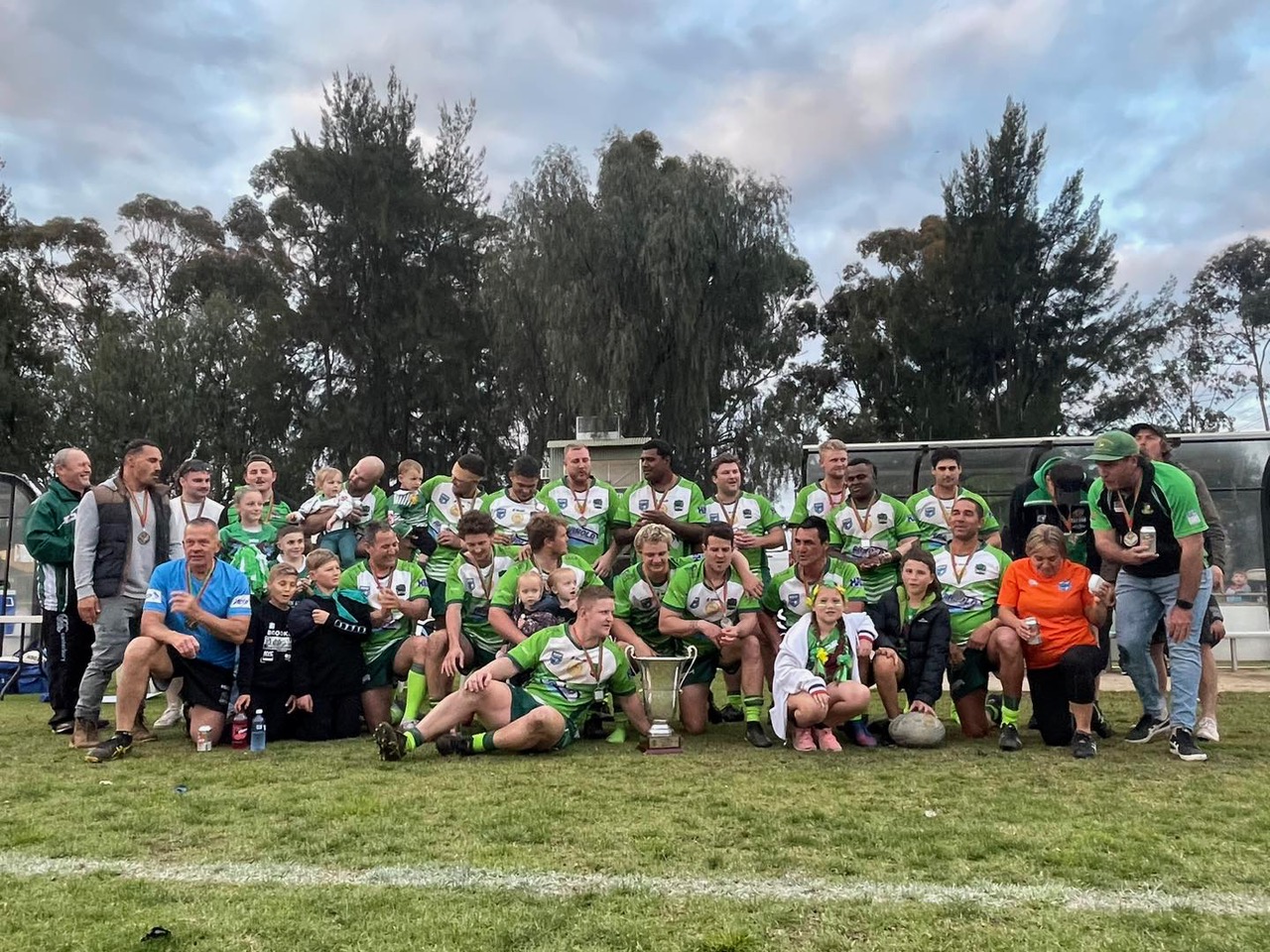 The Leeton Galloping Greens have capped off one of the more remarkable seasons in Group 20 history after walking away with four premierships from a possible five in the Group 20 Grand Finals at Griffith’s Solar Mad Stadium last Sunday.

In the opening game of the day, there was no stopping Leeton’s Under 16s, who were too strong for Yenda 30-6 in the Aub Farrel Cup Grand Final.

The Greens Under 18s then fought back to beat the Griffith Black and Whites 20-18 in the Harold Eckley Cup decider, and were too strong for the Black and Whites in League Tag after beating them 18-8.

In the only other lower grade Grand Final on the day, Yenda took out the Toby Blunt reserve grade competition, beating Darlington Point-Coleambally 40-8.

Minor premiers Darlington Point-Coleambally were heavily favoured to take out the main game, but the Galloping Greens were too strong for the Roosters, winning 30-10.

Centre Brayden Scarr starred in the performance, scoring four tries while winning the Barry Hails Medal as best and fairest on ground, and hailed the club’s efforts after the game.

“It is a massive achievement for Leeton taking out the four grades they were in, and our reserves only lost the week before to miss out on making the Grand Final,” Scarr said.

“From a whole club perspective, it’s been a huge season.”

Despite the Roosters holding the upper hand after two previous meetings between these two sides during the home and away season, Scarr said Leeton went into the decider with a positive attitude and willingness to fight hard and win.

“I think we were ready to go in for a massive fight,” Scarr said.

“We knew it was going to be a massive game, and it is always tough when we play the Roosters, but we had full belief we could get the job done.”

Scarr praised captain/coach Hayden Philp for having the Greens ready to deliver in the Group 20 decider.

“Full credit to our coach Hayden,” he said.

“He did a great job in the week leading into final.

“We all stayed together, and we had a pool session on Monday, training on Tuesday, a video session and dinner on Wednesday, Thursday off before a good training session on Friday where we met with the Old Boys, and then we had breakfast together on Saturday.

“It was a really good week, and we were ready for Sunday.”

Darlington Point-Coleambally boasted the most potent attack in the competition throughout the season, but Scarr praised Leeton’s defence, which restricted the Roosters to just two tries on the day.

“I believe our defence won us the game,” he said.

“Our kick pressure was awesome, and we just played as a whole team, and when they made breaks, we were always back there defending and ready to make the next tackle.

While he scored four tries, Scarr was quick to deflect any praise. He put the win squarely on the shoulders of each and every Leeton player that took the field on Sunday.

“For me, I was just at the right place at the right time, and full credit to the boys, the lead-up play was awesome,” Scarr said.

“I am not going to take all the credit because it was a team effort.”

Sunday’s win over the Roosters broke a 15-year drought for Leeton, who had last won a Group 20 title in 2007. Scarr won’t be around next season, but believes the Greens are in a good spot to go back-to-back in 2023.

“It was my second first grade Grand Final,” he said.

“In my only other one, we lost in 2013 when we played Lake Cargelligo.

“It was good to break through, and it’s a massive achievement.

“I believe there is a few playing on next year; I have thrown the boots in and won’t be back next year, but we have a young side, and the club is amazing and I think they can go ahead and go back-to-back.”