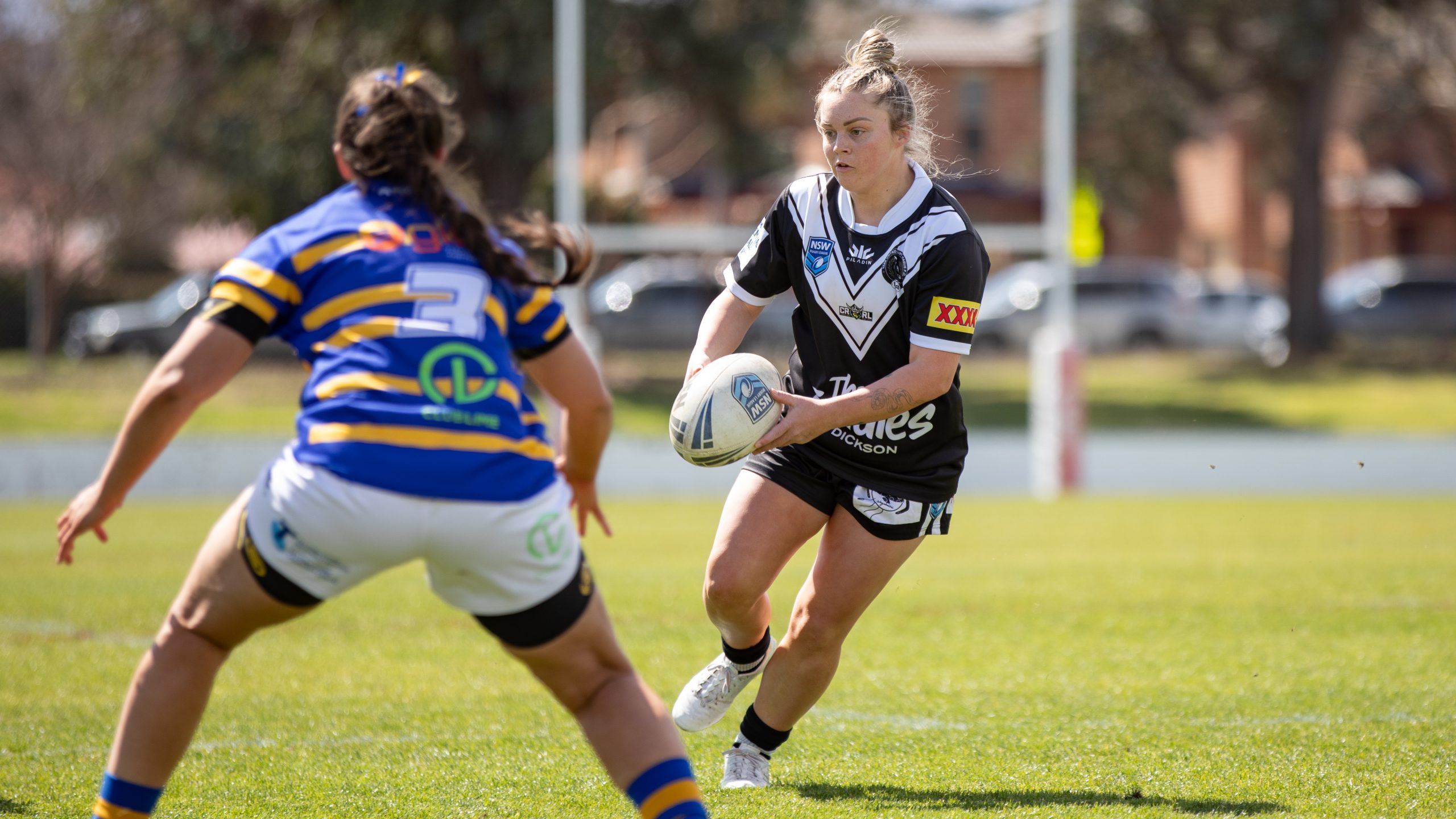 The Yass Magpies have finished the season undefeated and as the Katrina Fanning Shield premiers for 2022, claiming a 36-12 win over the Woden Valley Rams at Seiffert Oval.

It was a dominant first half from the Magpies which proved too much for the Rams to overcome, completing a perfect season with another big victory.

Yass centre, Tijana Zdravevska was awarded player of the match after proving to be lethal in the centres with some big defence and amazing attack.

It was a fast start for the minor premiers who capitalised off the first-set penalty to open the scoring.

It was a great run by back-rower Afele who produced a brilliant offload to Dummett which allowed her to cross over in the second minute.

The try was converted by Bullock as the Magpies gained an early six-point advantage.

The Magpies relentless start continued after they forced an error from the Rams with an awesome kick chase, giving them more possession in great field position.

Yass would immediately capitalise through Zdravevska who crossed over in the right corner, using some great power and footwork to beat the Rams edge defence.

Bullock’s second conversion attempt was unsuccessful, as the Magpies jumped out to a 10-0 lead after just six minutes.

The Rams seemed destined to not get the ball after Yass earned another penalty, and would capitalise with their third try in the ninth minute.

It was a beautiful short ball by Massey which found Smith who powered her way over, the conversion attempt was unsuccessful as the Magpies stretched their lead to 16 points.

Yass was on a different level as they rolled down the field and earned themselves a repeat set through another goal-line drop-out.

The Rams start went from bad to worse as Allan would end up leaving the field just 11 minutes into the contest.

Yass would score and take advantage immediately after more great field positions, as Dummett took on the line and crashed over for her second try.

The try was converted by Bullock as the Magpies would lead 20-0 after the first quarter of the match, with the Rams not having any possession besides the knock-on.

The Rams would finally take possession and complete their first set in the 16th minute, but it was great defensive work by the Magpies.

The Magpies were running rings around the Rams as Zdravevska would power her way over for a second try in the match.

Yass made it clear they were targeting the edge defence and it was Dummett who was terrorising Woden’s defence as she would combine once again with Afele, who crossed over in the 24th minute.

Unfortunately, Bullock wasn’t able to convert from the left sideline but it was still a dominant 28-0 lead for the Magpies.

Afele would cross over for a second try just moments later after another great run by Dummett put them in excellent field position.

Yass would earn a penalty in the final minute of the half and had one last chance to put points on before halftime, but the Magpies were able to hold strong.

It was a dominant first half from the minor premiers who went into the break with a 32-0 lead.

Woden had to start the second half fast to have any hope of a comeback and that’s exactly what they did, pinning down Yass in their own corner.

The Rams would open their scoring for the match just moments later in the 33rd minute after Brewer powered over multiple defenders.

Morris converted the try right in front, a perfect second-half start for the Rams.

Unfortunately, an error from the Rams would gift possession right back to the Magpies, failing to find touch from a penalty.

The Rams defence improved out of sight in the opening ten minutes of the second half and the game wouldnt break open until Smith made an incredible for the Magpies.

It took an incredible try-saving tackle from Woden to stop her just metres out from their goal line which would have ended any chance of a comeback.

Rams were desperate to score and keep any comeback hope alive but made a crucial error when they seemed destined to score.

Yass would seal their victory in the 53rd minute after Gaynor crossed over in the right corner after Fleming put them in great field position with an awesome run.

The sideline conversion attempts didn’t seem to be working for Bullock, but the try gave the Rams a 30-point lead after finally scoring their first try of the second half.

The game was over but the Rams would prove how much they improved in the second half by scoring the game’s final try in the 58th minute.

It was an eyes-up play from Ryan who crossed over from the dummy half and a successful conversion from Morris would limit the deficit to 24 points as the full-time siren went.

In the end, a dominant first half from the Magpies was too much for the Rams, as Yass completed their undefeated season with a 36-12 grand final win.