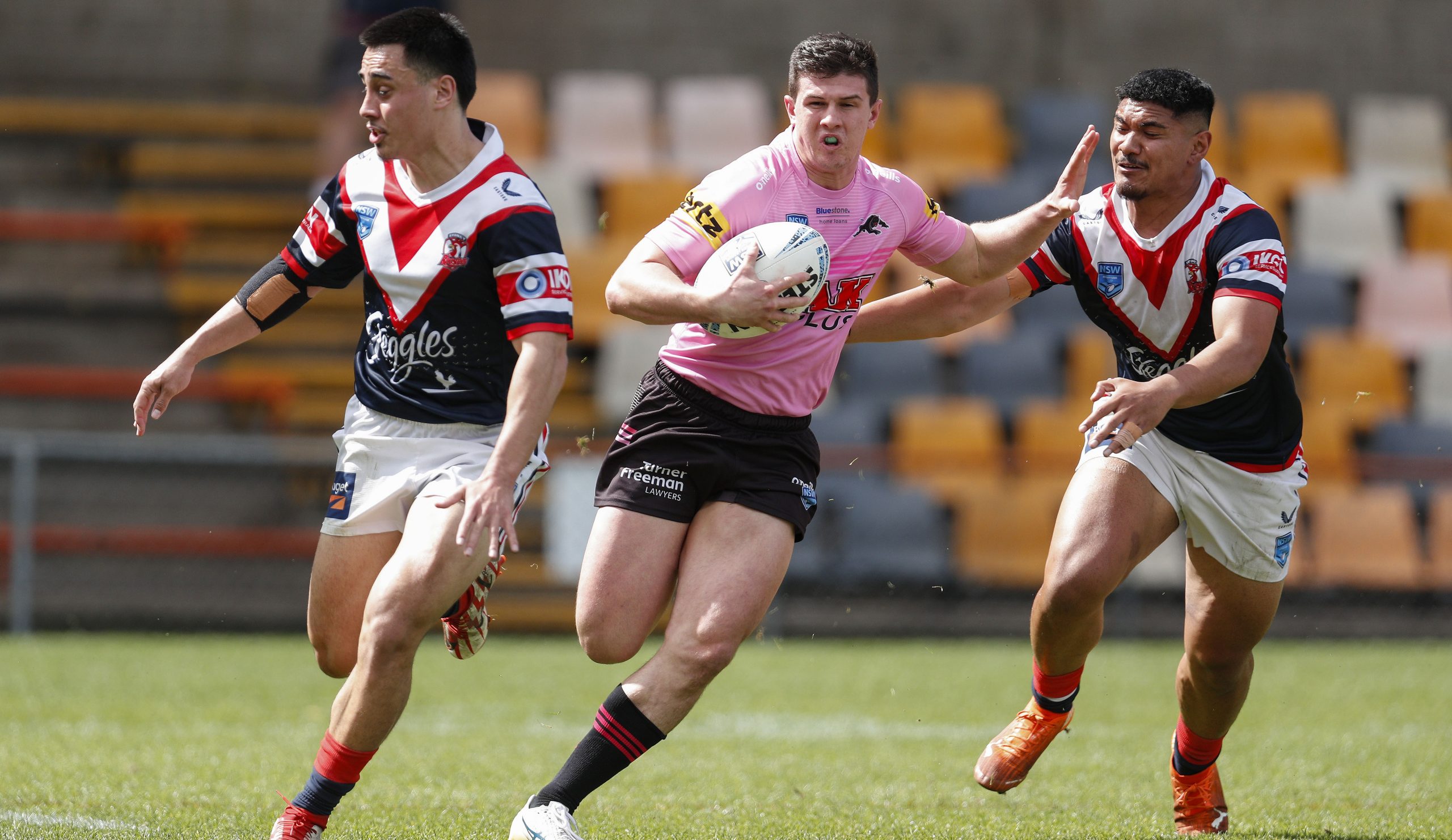 Penrith have today survived a second-half surge by the Sydney Roosters to force their way into the Jersey Flegg Cup Grand Final next week with a 27-22 win – which included a rarely seen three-point penalty in the Preliminary Final at Leichhardt Oval.

The Panthers will now meet the Newcastle Knights at CommBank Stadium on Sunday 25 September to decide the first Jersey Flegg Cup winner since 2019, after the NSWRL’s major competition was forced to abandon the past two deciders due to the COVID-19 pandemic.

The Panthers scored three tries in the first half to set up the win with an 18-6 at the break. They then added a fourth try in the second half before withstanding two late tries to Roosters second-rower Riley Meyn and centre Vaiala Tamati.

It was a disappointing fortnight for the Roosters after winning the Jersey Flegg Minor Premiership before successive losses to the Knights and Panthers saw them bow out of the contest.

The three-point penalty occurred after halfback Isaiya Katoa slotted a field goal in the 62nd minute to extend the Panthers lead to 25-12. Referee Kieran Irons received word from his touch judge that Roosters prop Zac Montgomery had made a late hit on Katoa and awarded a penalty from right in front of the posts to extend the lead to 27-12.

“I’m just glad it went our way with Isaiya stepping up like all good players do, but I’ve never seen anything like it,” Panthers stand-in skipper Brad Fearnley said.

“The boys just wanted to dig in for Hohepa because he’s been our man all year – we wanted to lift for him and some others out injured, that was the underlying factor,” Fearnley said.

“On top of that we just wanted to get to that Grand Final so bad and have another crack at Newcastle.”

For Roosters coach Anthony Barnes he lamented some of his team’s mistakes and some of the rulings.

“Not much went our way… you could see that with the field goal,” he said.

“It was ruled a shoulder charge, but I thought it was no more than a bump. That’s how footy goes. They played really well – they held us out, so they’re deserved winners.”

Penrith got down to business early scoring two tries on both edges, through wingers Cody Lawson and Daeon Amituanai, within the opening 10 minutes.

It reflected the wealth of possession enjoyed by the Panthers off the back of fine work by forwards like Fearnely, Harrison Hassett, Mavrik Geyer and Ativalu Lisati with hooker Ryley Smith directing traffic, combined with the Roosters’ heavy error rate.

A third try for the Tri-Colours came from a simple right-foot step by fullback Liam Isan to evade the defence. It shot the scoreboard out to 16-0.

The Roosters first attacking set didn’t come until the 21st minute. However, hooker Thomas Deakin was held up over the line.

They did sneak in their first try three minutes from half-time with Corey Ross barging over under the sticks with Vaiala Tamati converting (16-6) before a Puru penalty in the shadow of the hooter final seconds.

In the second half, a fine 31-metre individual try from fullback Ethan King put the Roosters right back in the game with 25 minutes to play (18-12).

Interchange hooker Tyler Moriarty upped the tempo for the Roosters as they as offered a lot more questions in attack.

But then Sunita Lotoaniu dived through flimsy defence for the Panthers to extend their lead (24-12), which proved enough to hold out the strong-finishing Bondi Junction club.