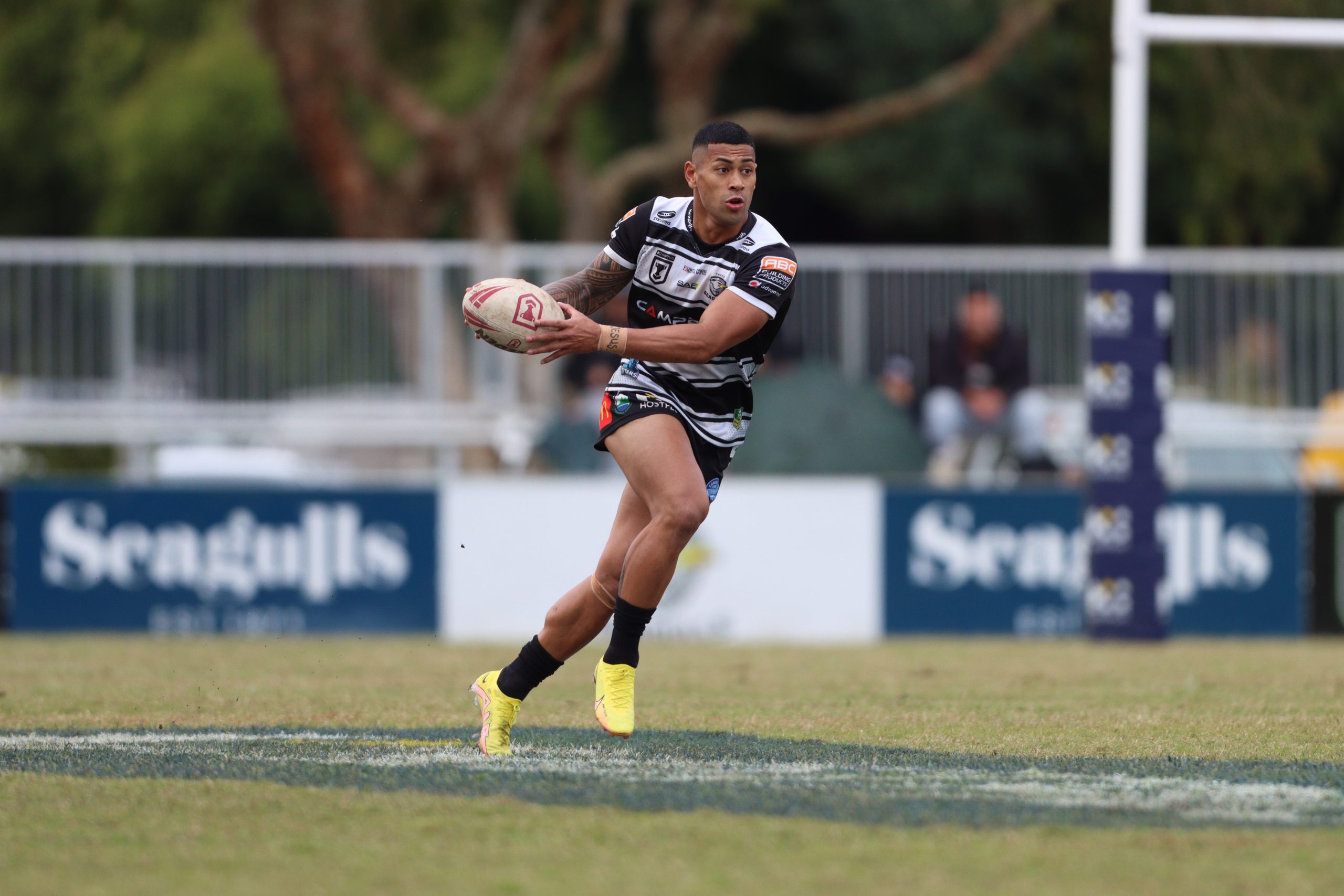 The Tweed Seagulls played out a brave 24-18 win over the Brisbane Tigers at Piggabeen Sports Complex to open their account in the 2022 Hostplus Cup finals series with style.

Tweed looked comfortable with the ball in hand right from the get go. A trademark shift out their own end brought Lee Turner into the game early, with 100 Cup games milestone man Lindon McGrady creating the extra numbers to send the ball wide in Tweed’s first possession.

It was a sign of things to come, with the Seagulls searching down that left edge twice in their next two sets. Will Brimson got involved early to again pitch Turner one-on-one with Solomona Faataape before sneaking down the short side on the following play and almost orchestrating first points when an offload to Scott Galeano found the winger unmarked but travelled forwards.

After looking left at every opportunity to begin the game, a rare right side movement triggered by Sam Lisone at first receiver proved a fruitful one when none other than the Prince of Piggabeen slid over in the 10th minute to open the scoring.

Taking the ball at speed and with JJ Collins in support off his hip, Lisone attracted three Tigers defenders towards the ball before rifling a pass out the back through Toby Sexton to link with his skipper. Still left with some work to do, McGrady used his footwork, speed and fend to slice through the line and score from there.

Ill-discipline on both sides of the ball continued to be Brisbane’s undoing as fatigue set in and the Seagulls built momentum. A knock-on from Tigers interchange forward Wesley Lolo just 10 metres out from his line gifted Tweed more attacking territory and when Brisbane doubled up their errors to send a goal-line dropout over the sideline, McGrady took the two points on offer to extend Tweed’s lead to eight.

With a comfortable buffer on the scoreboard, the Seagulls seemed to grow another leg, but for all their territorial dominance they couldn’t land the killer blow. Brisbane scrambled well on both edges throughout this period to hold up Josh Patston over the line on the right edge and defend a late offload from Turner on the other side of the field.

After what felt like an age defending their own line, Brisbane would finally get reward for effort in the 36th minute when they capitalised on a rare attacking set to score through winger Bessie Toomaga.

Departing halfback Darren Nicholls’ fingerprints were all over Brisbane’s opening try, testing the Seagulls once down the right edge early in the set before executing a slick short-side movement late in the count which ended up in the hands of Dan Russell at right centre. With Tweed winger Scott Galeano bearing down on him, Nicholls produced a marvellous back-handed flick pass for an unmarked Toomaga to score in the corner.

A superb sideline conversion from Jonah Pezet would round out a grinding first half of football, with Tweed holding onto a narrow two-point lead at the break.

The Tigers began the second stanza as they finished the first to work themselves into Tweed’s half and fire two shots at them in the opening set. Again it was Russell at right centre causing plenty of problems for the Seagulls’ defence as he made serious inroads down one side of the field to open things up for a Pezet cross-field kick on the following play. That kick found a flying Zak Taibi who did well to beat Jamayne Isaako in the air and offload on landing to gift Brendan Gregorious a clever four-pointer.

Brisbane looked to be in again shortly afterwards when a Jayden Nikorima grubber kick linked with Toomaga in the right-hand corner, only for the video referee to call things back for an obstruction.

That no-try appeared to kickstart Tweed back to life and they wasted no time in troubling the scoreboard themselves through Will Brimson in the 49th minute.

Brimson’s scoring play began one tackle earlier with McGrady taking possession down the right edge and playing over the ad-line to almost pitch Joshua Patston through a hole. With the momentum created, hooker Brent Woolf jinked across-field with a tempo-changing run to hold up the defence before passing through Sexton to Brimson on the far side of the field. From there, Brimson’s speed proved too much for the sliding defence as he squeezed through the line and dived over to level things up.

Tweed then went back-to-back just six minutes later when Jamayne Issako finished off a slick right-edge movement in the corner.

All of Tweed’s big names were involved in this shift as Woolf, Sexton and McGrady linked up to move the ball smoothly from edge to edge and get Isaako one-on-one with Taibi. Where we’re used to seeing Isaako’s fancy footwork in areas like this, instead the former Bronco and Titan relied on brute strength to brush aside the attempted tackle and plant the ball down just inside the corner post to give Tweed a four-point lead.

As was the case with Brisbane in the first half though, the Seagulls then came up with back-to-back errors to invite their opposition back into the game. An Isaako linebreak ended with a pushed offload that travelled forward and when Turner fumbled a play-the-ball in Tweed’s next possession, Brisbane made them pay. Again it was Pezet’s boot that proved the difference, sneaking out of dummy-half and dropping a neat grubber under the black dot for Nikorima to score in the 62nd minute.

A simple conversion from right in front gave Brisbane back the lead but it would last less than two minutes when the Seagulls forced an error in the kickoff set and then searched down their familiar left edge to score through winger Scott Galeano.

Again it was the work of Lisone through the middle that created the space out wide, with the big prop demanding attention from the defence before shifting smartly to his outside where Brimson, Turner and Galeano were waiting. A difficult conversion attempt followed with McGrady unable to overcome a strong breeze, leaving Tweed just two points ahead with 15 minutes remaining.

With the clock winding down, the Seagulls closed things out just as they started in this one.

Tweed powered through the middle on the back of strong carries from Lisone and Collins before shifting quickly to their left edge for Brimson to challenge the line. Again with too much speed for a sliding and retreating defensive line to handle, Brimson eventually cracked them in the 71st minute to burn his opposite man and make yet another linebreak to take Tweed’s lead out to six.

A desperate defensive set in the shadows of full-time was a compelling way for Tweed to round out a 24-18 win over the Brisbane Tigers at Piggabeen on Saturday afternoon, with winger Scott Galeano capping off a stellar game to force an error with a jamming effort that sealed the result for the Seagulls.