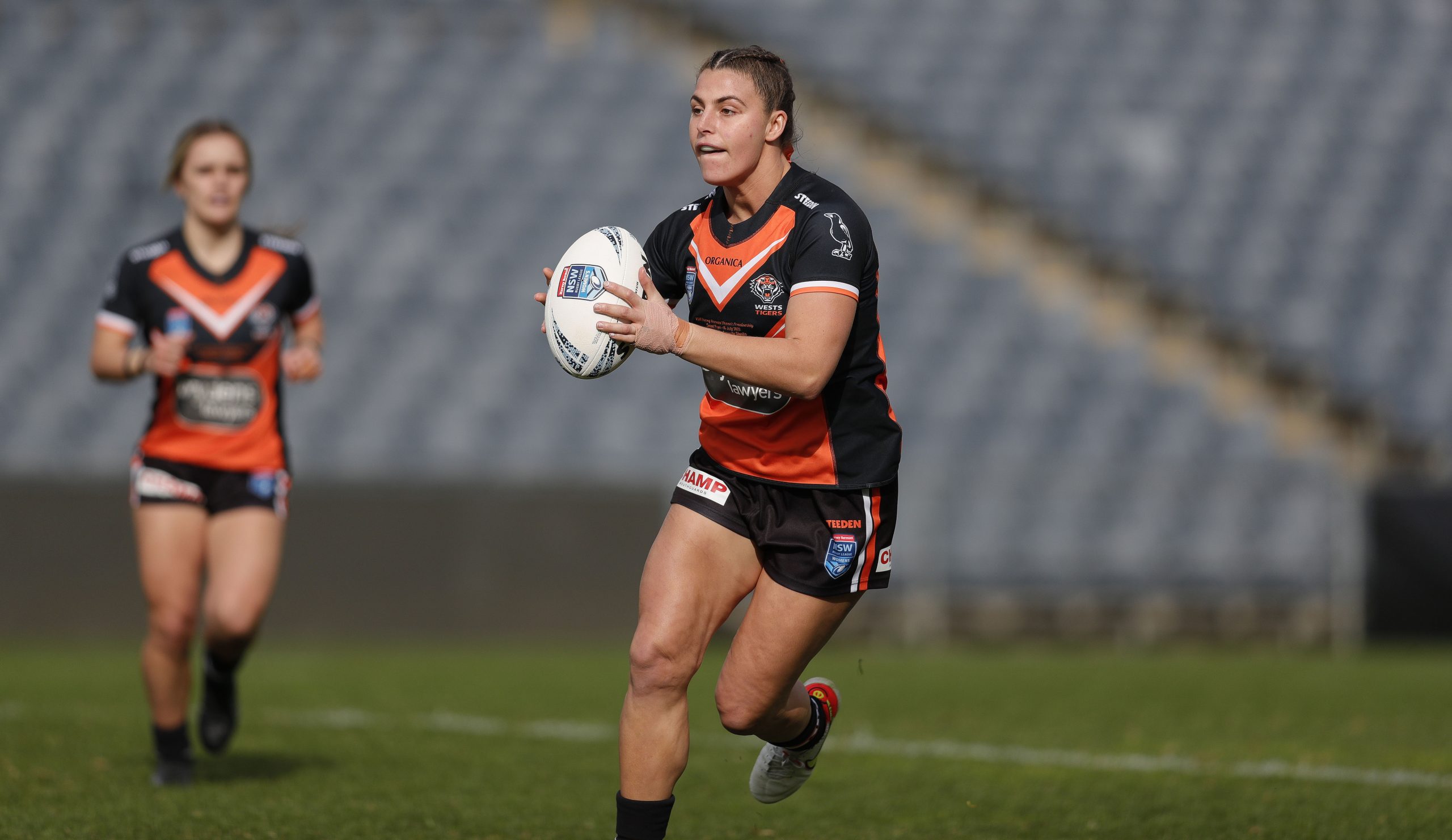 In a match that was befitting of a Grand Final, both teams could not be separated at full-time and again after an additional 10 minutes of extra time. Tigers halfback Emily Curtain eventually broke the deadlock after she banged over a field goal over in golden point to spark the celebrations.

The teams finished the opening 70 minutes locked up at 14-all and the Sharks looked like it would be their day when Sam Bremner scored underneath the posts to take a 20-14 lead in extra time.

The Tigers refused to give in and centre Keele Browne grabbed her second try of the game before Curtain landed the tricky conversion to lock the scores up again.

Curtain, who had her fingerprints all over the Tigers victory, was named a deserved Player of the Match after stepping up in golden point to land a clutch field goal as the Sharks defence was trying to swamp her.

“It’s been a long time coming, us Tigers girls have worked hard for four years to try and get here to finally do it, is full credit to the girls they stuck in that whole 80-minutes and it was just great to see the effort from the girls,” Curtain said.

“We grew as a team towards the end of the season and to get that win it is amazing there is no feeling like it. I have no words; we have practiced getting to this moment to be able to finally do it is amazing and I can’t wait for the next one.”

Sergis turned in a strong performance for the Tigers – including coming up with the final charge on the play before Curtain’s field goal which gave the Tigers halfback the time and space to have a crack – but there were plenty of stars on both sides.

“How good is that?” Sergis said.

“That is probably the hardest game of football and the longest game I have played in a very, very long time.

“It was a rollercoaster of emotion; holy crap how good is women’s football!

“I just knew my role it was to try and get as close as I could to the posts and get a quick play the ball my job was easy it was hers (Emily Curtain) to have to slot both of those goals and she did. She is tremendous and she really deserved to have that game; she’s a legend.”

There was no shortage of firepower heading into the decider with Harvey Norman NSW Sky Blues representatives Kezie Apps and Sergis turning out for the Tigers; while Tiana Penitani and Quincy Dodd were on deck for the Sharks.

Both teams had scored upset wins in the Semi-finals to make the decider. The fourth-placed Tigers knocked off Minor Premiers North Sydney 24-10; while the third-placed Sharks were too strong for second-placed Mounties 22-4.

The first half was befitting of a Grand Final with end-to-end action with both sides having chances to score. The Sharks had an early try disallowed to Zali Fay after she lost the ball over the line while the Tigers were denied after a final pass from Emily Curtain was ruled forward.

The Sharks again went close when Quincy Dodd was held up over the line while a promising raid from the Tigers came unstuck when Sergis charged on to an offload from Apps only for Dodd to knock the ball out of her hands.

The defence was equally as impressive from both sides. Wests Tigers five-eighth Losana Lutu showed great desperation to chase down Sharks winger Teagan Berry and ankle tap her from behind to snuff out a dangerous break down the sideline.

The Sharks finally broke the shackles when back-rower Talei Holmes dragged in several defenders but still managed to get an offload away for Penitani who dummied to her outside before crashing over the line for a 4-0 lead.

The Tigers hit back when Curtain put a kick through for Browne to snatch out of the air and wheel around to score. Curtain missed the conversion but the score line was locked up at 4-all.

The Tigers came close again through Apps, with only some desperate defence from Zali Hopkins saving the day, while another opportunity went begging after replacement Shekinah Edwards ignored her outside support.

The Sharks looked like they would take a 6-4 lead into half-time after Studdon landed a penalty goal but the Tigers scored after the siren had sounded when Tayla Preston held up a pass nicely for Sergis to cross over before improving her position. Curtain converted to put the Tigers in front 10-6.

The second half was a mirror image of the first 35 minutes, with both teams turning it on in both attack and defence.

The Sharks levelled the scores at 10-all when Studdon held up a ball brilliantly for Holmes to score but unfortunately Holli Wheeler – who had worked tirelessly all game – dropped the ball from the kick-off to invite the Tigers back into the game.

Preston took advantage of the situation when she drew in the defence before flicking a pass for Josephine Lenaz to score in the corner. Curtain was unable to land the difficult conversion attempt but the Tigers had the lead at 14-10.

Again, the Sharks came back when Penitani managed to shovel a pass out for Fay to score. Studdon also had a tricky conversion from the sideline she was unable to land to leave the scores locked up at 14-all.

Both sides had their chances to break the deadlock but were unable to convert to send the game into extra time.

The Sharks looked to have claimed the day when Dodd made a break up the middle and found Bremner in support with Studdon landing the conversion from right in front for a 20-14 lead.

The Tigers refused to give in and Lutu put Browne over for her second try of the afternoon with Curtain landing the clutch conversion to level the scores at 20-all and send the match into golden point. The Tigers halfback then stepped up again to land a field goal and seal an epic win.