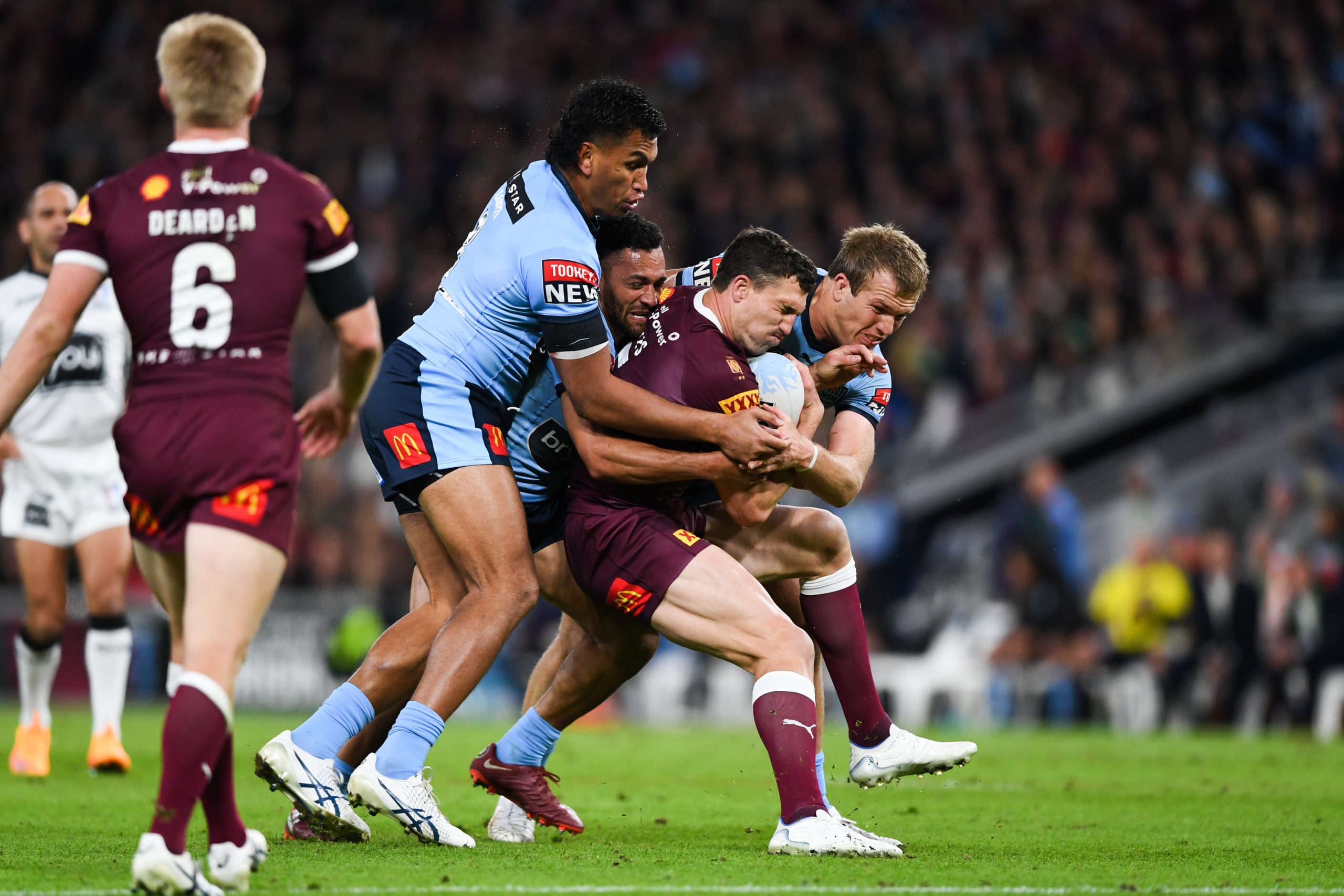 Queensland have pulled off one of their greatest and courageous wins in State of Origin history, forced to come from behind with 15 players to take out the 2022 series at Suncorp Stadium.

The Maroons, ranked outsiders on home turf following their Origin II loss in Perth and reeling from the withdrawals of Cameron Munster and Murray Taulagi, shut the Blues out in the second half.

Maroons fullback Kalyn Ponga responded to critics to put on a masterclass in the second half and come up with the match-winning play after the Blues held a 12-10 lead after 60 minutes.

His solo effort, and miraculous performances from Ben Hunt and Daly Cherry-Evans, got the Maroons home.

In one of the most frantic openings in Origin’s 43-year history, three players were lost to head knocks in separate incidents after just five minutes of play.

Cameron Murray was first to leave the field after colliding with Corey Oates in the second minute before Selwyn Cobbo copped friendly fire from teammate Patrick Carrigan and was assisted via medicab.

The game was stopped again two minutes later when Lindsay Collins failed a head injury assessment after collecting the hip of Roosters teammate Daniel Tupou in a tackle.

Once the match got back into a groove the Maroons got on the board first through ever-reliable centre Valentine Holmes with Cowboys teammate Tom Dearden the provider to come up with a try assist on debut.

After being called in late for Cameron Munster, the Maroons rookie looked calm in his first appearance on home turf.

NSW weathered another Queensland raid before striking back on the scoreboard through Blues five-eighth Jarome Luai.

Luai’s club combination with Nathan Cleary came to fruition with an 18th minute grubber finished off by the livewire playmaker.

The Blues snatched the lead in the 31st minute when Knights prop Jacob Saifiti, who was called in for Jordan McLean last week, ran onto an Api Koroisau pass to the line.

Just as the Blues looked to be gaining the ascendency, a sloppy error from Daniel Tupou with 90 seconds left before half-time enabled Queensland to reduce the deficit to two points.

A weaving Harry Grant teamed up with Kurt Capewell, who moved into the centres following Cobbo’s injury, to get the side their second on the stroke of the break with the Broncos back-rower beating Brian To’o to the ball in-goal.

Tempers boiled over immediately after half-time when Dane Gagai took out Matt Burton in back play to spark an all-in melee with both players sent to the sin-bin for throwing punches.

The reduction of 12 sapped both sides further energy but none more so than the Blues who began to lose their way in attack with a brainsnap by Stephen Crichton in the 58th minute allowing Queensland to take the lead.

Ponga’s solo effort got the Maroons the lead before the Blues continued to fumble their way to defeat that will have those south of the border questioning some decisions made by Brad Fittler throughout the series.

However, ultimately, the Blues made it hard for themselves the moment they dropped Origin I in Sydney and despite a gallant effort in the decider, were no match for a Queensland side that never, ever say die.