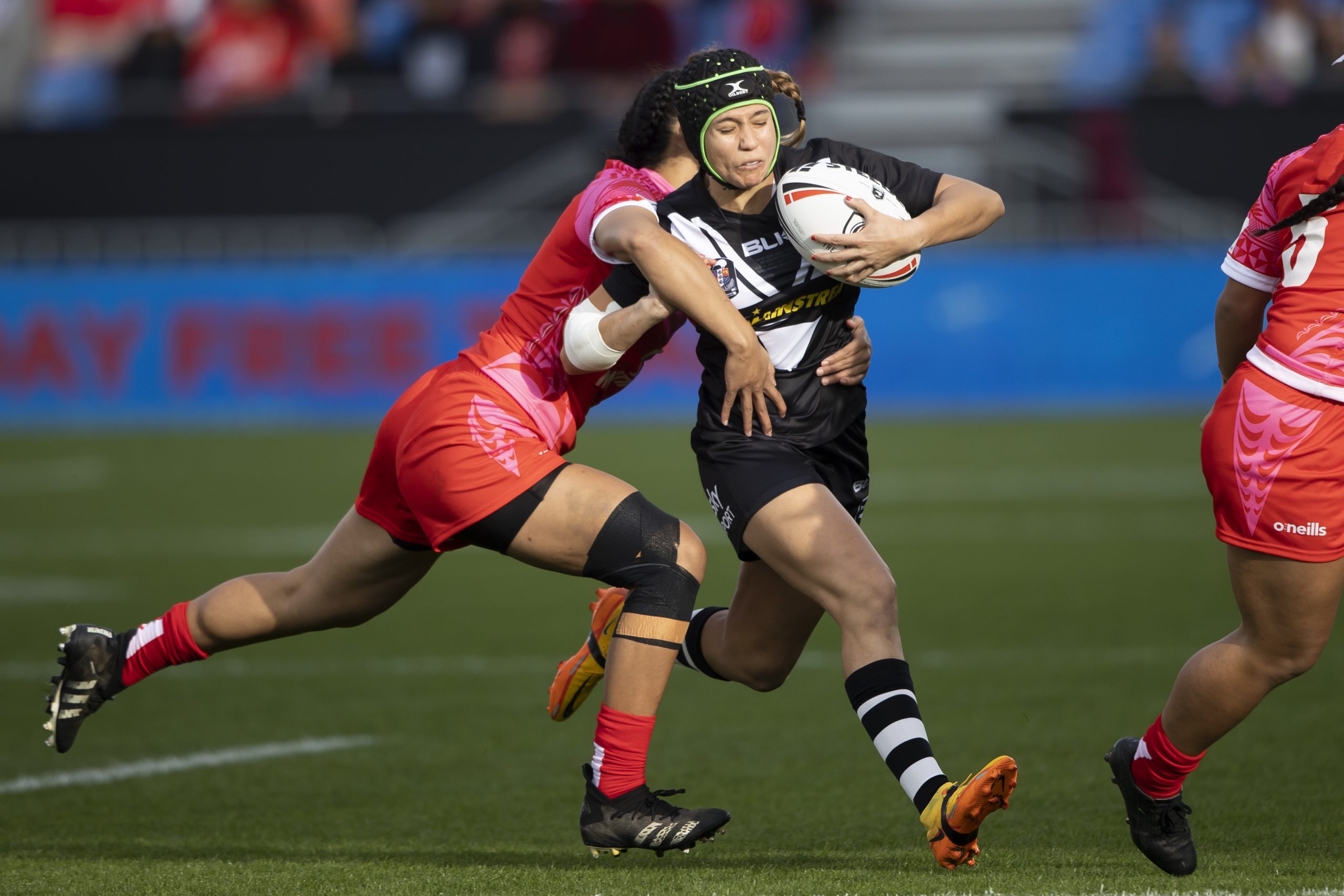 Doubles to wingers Madison Bartlett and Katelyn Vaha’akolo spearheaded the Kiwi Ferns to a 50-12 win over Mate Ma’a Tonga at Mt Smart Stadium on Saturday.

With international rugby league returning to Mt Smart for the first time in three years it was the Kiwi Ferns riding the emotion to produce 11 tries in an impressive attacking display.

It took the Ferns just five minutes to open the scoring when centre Page McGregor celebrated her Test debut with a try to make it 4-0.

Three minutes later the lead was doubled when a great offload by Annetta Nu’uausala and some slick hands by Ngatokotoru Arakua and Page McGregor put Madison Bartlett over in the left corner.

Come the 10th minute and the Kiwi Ferns had a third try through Katelyn Vaha’akolo after debutante Laishon Jones busted a couple of tackles and lobbed a ball over to Roxette Murdoch who kept the movement going for the right winger to score.

A great head-on tackle by Kalosipani Hopoate on Charlotte Scanlan denied New Zealand a fourth try but the ball was shifted to the right and Raecene McGregor produced sharp footwork to score and the Ferns were out to 18-0.

Tonga five-eighth China Polata was a constant threat in the opening term and came close in the 30th minute but desperate defence bundled her over the sideline just short of the line.

The Kiwi Ferns took the ball straight up the other end and Raecene McGregor turned provider with a deft chip over the top for debutante Amy Turner to score.

Debutante Roxy Murdoch added her name to the tryscoring list in shadows of half-time as the Kiwi Ferns blew the scoreline out to 30-0.

Kararaina Wira-Kohu started the second half in style with her first Test try in the 43rd minute courtesy of an inside pass from Maynard before Bartlett brought up her double to make it 40-0.

In the 59th minute it was five-eighth Jones grabbing the Ferns’ 10th try with some smart moves close to the line which would done her uncle Stacey Jones proud.

Tonga continued to take the fight up to their more fancied rivals and they were rewarded in the 65th minute when Polata capped a brilliant game with her team’s first try. Haylee Hifo’s conversion made it 44-6.

Polata racked up 91 metres from 10 runs and broke three tackles in a wholehearted display for a courageous Tongan outfit.

A dart out of dummy half from Maynard put the exclamation point on the Ferns’ victory as the half century was raised on a memorable afternoon for coach Ricky Henry and his team.

With a minute to go it was Hifo catching a bomb on the full and racing away to send the Tongan fans into raptures as the final score read 50-12.

Among a host of stars for the Kiwi Ferns, Newcastle fullback Stephens-Daly was dynamic with 157 run metres, two line breaks and five tackle breaks while Georgia Hale ran for 181 metres.