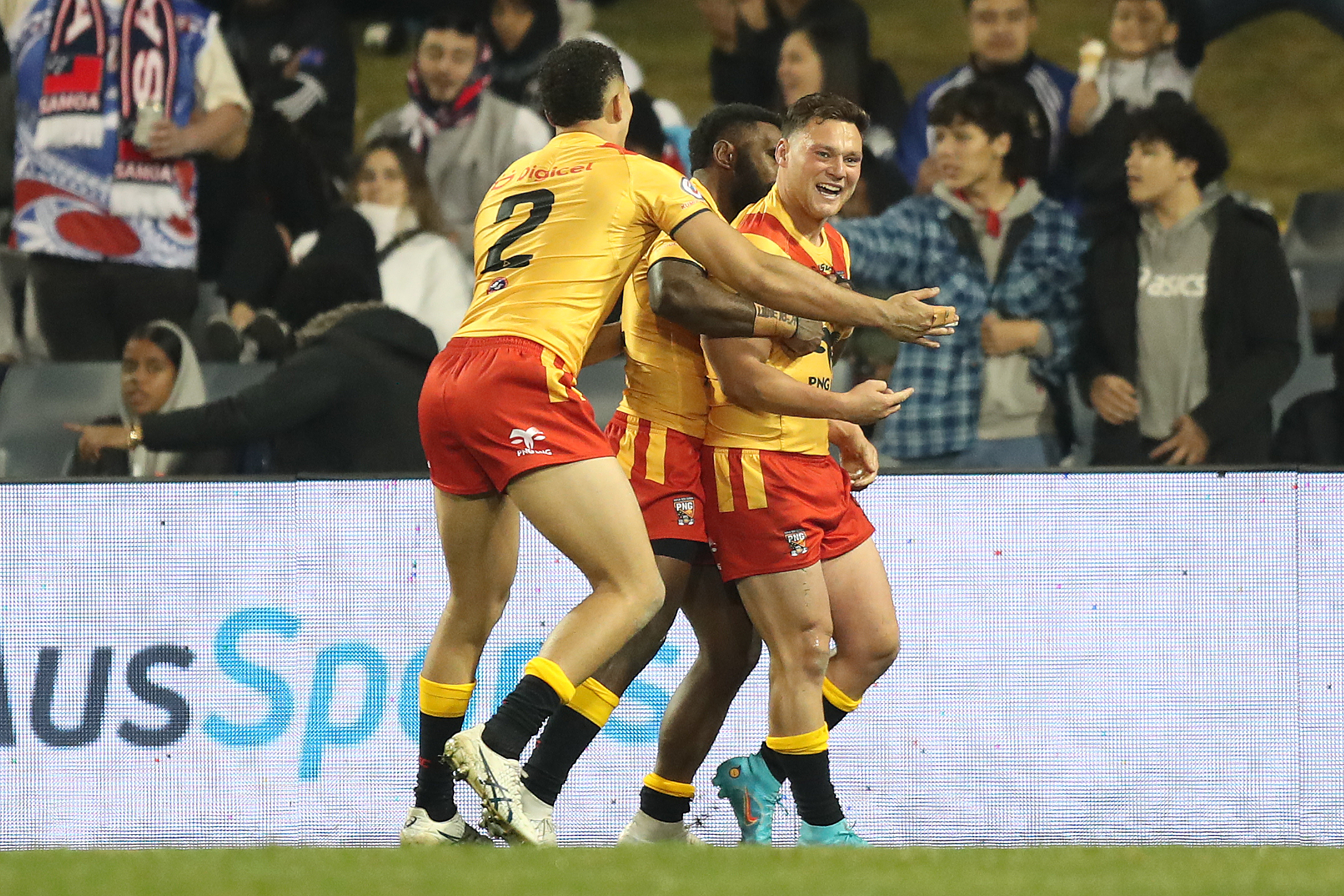 The PNG Kumuls sent retiring skipper David Mead out on a high with a 24-14 win over Fiji at Campbelltown Stadium on Saturday night.

Mead grabbed a try and ran for 139 metres as he led his country to their eighth win in their past 10 Test matches.

Fiji looked to have struck the first blow in the 10th minute when Taane Milne powered crashed over from close range but he was ruled to have lost the ball on the way to the ground.

Not to be denied the Bati kept the pressure on and co-captain Kevin Naiqama opened the scoring when he put in a grubber and cleaned up the scraps after Dan Russell had fumbled the ball.

With the Kumuls searching for a game breaker it was Storm superstar Justin Olam who stood up, goose-stepping his way past defenders and racing 40 metres down the left touchline before sending a pass inside for Lachlan Lam to score. Kyle Laybutt’s conversion levelled the scores at 6-6.

Six minutes later the Kumuls had a new hero when Test debutant McKenzie Lei skittled four defenders on a 15-metre charge to the line to put his team up 12-6 at the break.

The Kumuls looked set to follow up that late strike with an early second-half try when Solo Wane got into the open on the left wing but he was denied by desperate cover defence from Sunia Turuva.

Laybutt looked to have extended the Kumuls’ lead in the 50th minute when he shrugged off Viliame Kikau and surged to the tryline but the bunker ruled a double movement.

Fiji then worked their way to the other end where Milne put in a well weighted grubber for Turuva to cap a stunning performance with a four-pointer but Nautua Masima missed the easy conversion and PNG clung to a 12-10 lead.

With the game on the line it was Lam who stood tall, splitting the Fiji defence and finding skipper David Mead inside him for an emotional try as the Kumuls went up by eight.

A penalty against PNG hooker Wartovo Puara for late contact on Naiqama after a kick gave the Bati more possession inside the 20-metre zone and Pio Seci got over the stripe but he was held up by Alex Johnston.

Lam then put the icing on the Kumuls cake in the 75th minute when he collected an Olam grubber and dived over for his second try of the night to make it 24-10.

A consolation try to Turuva was fitting reward for his outstanding game in the No.1 jersey for Fiji but it was the Kumuls home 24-14.

The Kumuls’ win provided the perfect send-off for Mead, who had announced pre-match that he was retiring from international football after 15 Test matches.