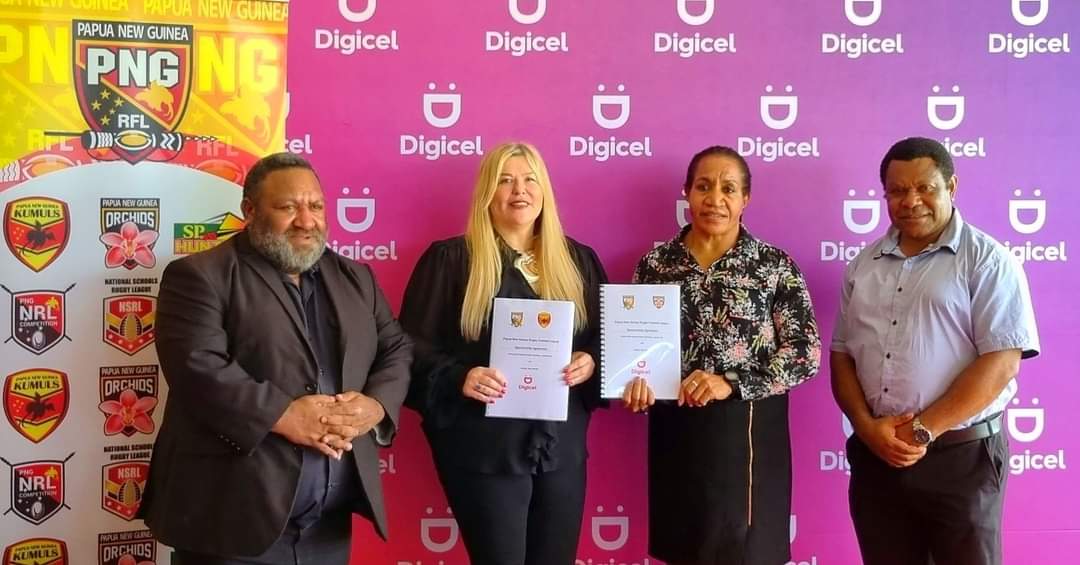 PNG’s leading telecommunications provider and digital operator today announced its backing of the two national teams, signing on as a Platinum Sponsor for three seasons commencing this year.

Digicel PNG’s Senior Vice President, Lorna McPherson said, “Digicel PNG has been proud sponsors of rugby league in Papua New Guinea for well over a decade and we continue to invest in the development of our local talent at the community, national and international level.

Since we kicked off the Digicel Cup in 2011, Digicel PNG has been committed to the development of our local players and PNG officials. We have aired live telecast of Digicel Cup games, sponsored the PNG Hunters and acquired the rights to televise all PNG Hunters games in Australia so that our people don’t miss a tackle or the winning try.

Our commitment to PNG’s national sport is our commitment to the people of Papua New Guinea and I am proud to announce that Digicel PNG will sponsor over K6 million in the next 3 years as part of our platinum sponsorship for both our National Rugby League teams and flag bearers, the PNG Kumuls and PNG Orchids, respectively.

As part of our platinum sponsorship, both the PNG Kumuls and PNG Orchids will receive K1m each in 2022, K1.1m in 2023 and K1.2m in 2024. All Players and officials of our national teams will be provided over K150, 000 worth of phones and WiFi devices with Data services under this sponsorship.

We have supported rugby league at all levels from grassroots competitions to local community tournaments, school boys rugby league, the Digicel Cup, the PNG Hunters and now, it is our pleasure to be named as Platinum sponsors of the PNG Kumuls and PNG Orchids.

I wish the PNG Kumuls the best in their preparation for the upcoming Rugby World Cup and I urge all PNG rugby league fans to get behind the PNG Kumuls and show them support as they prepare to represent us in the international arena”.

PNG Orchids Chairlady Okara Yogi expressed gratitude towards McPherson and Digicel PNG’s support to the female national rugby league team. She further added that the plantinum sponsorship towards the Kumuls and Orchids was timely and Digicel PNG could not be thanked enough for the support over the 3-year funding.

Speaking on behalf of the Kumuls Board, PNGRFL Chairman, Sandis Tsaka expressed the significance of the platinum sponsorship by Digicel PNG as it would not only support the two national teams towards the World Cup but over 3 years.“Digicel as we all know are not new to the game, they’ve invested in the sport over the last 20 years significantly across all our 6 tiers of the game,” he said.