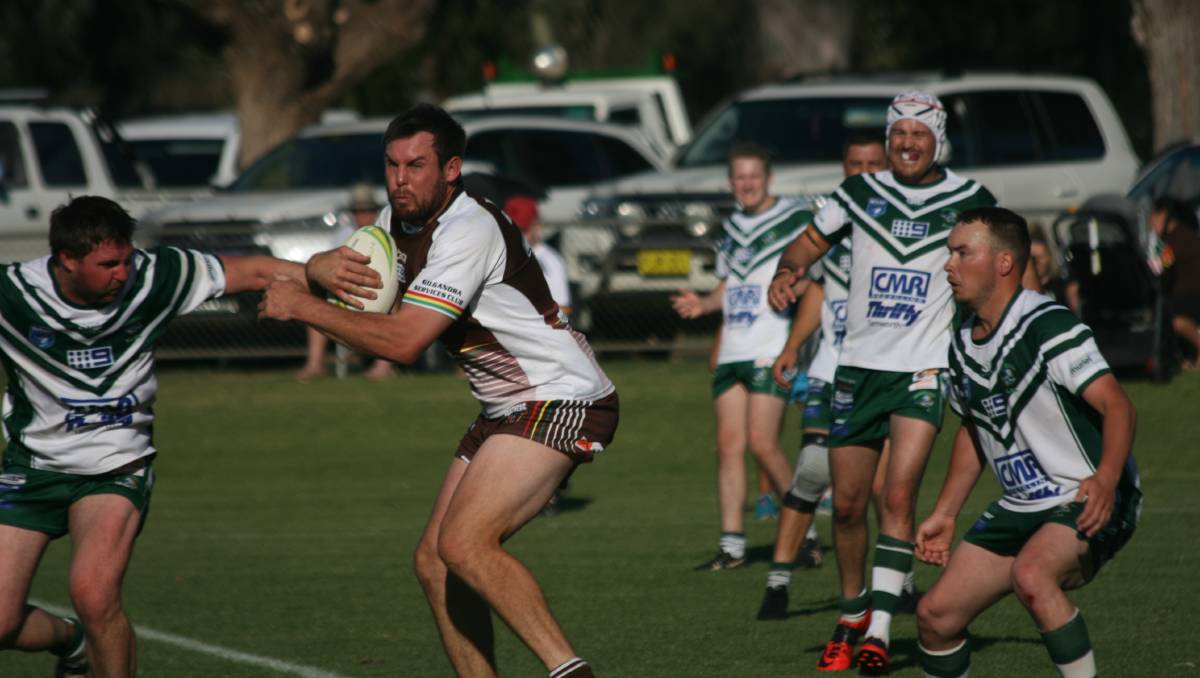 The Gilgandra Panthers have held on for a hard-fought 22-16 win over the Dunedoo Swans in their Round Three Christie and Hood Castlereagh League clash played at Gilgandra under lights on Friday night.

Although the Swans went home empty-handed, they turned in a much better performance after they were beaten 60-6 by the Coonamble Bears the previous week.

The Swans certainly gave their supporters something to cheer about, and the Panthers plenty to think about when they trooped to the sheds at half time holding a ten-point lead, with the scoreboard reading 16-6 in their favour.

However, it was to be the home side that slowly but surely clawed their way back into the game and after 26 minutes of the second half they held a slender 18-16 lead after two converted tries.

The two sides then slugged it out with the result very much in the balance until an unconverted try with five minutes remaining increased Gilgandra’s lead to 6.

The Swans threw everything at the Gilgandra defence in what was a frantic and tense finish to the game, very nearly giving themselves the chance of salvaging a draw on numerous occasions but the Panther defence held on for a gutsy 22-16 win.

Dunedoo did not go home empty handed however with their slick and well drilled League Tag side blitzing Gilgandra’s Pink Panthers to the tune of 56-0.

The Gulgong Bull Terriers scored a rare double over the Cobar Roosters winning both the League Tag and First Grade fixtures narrowly at Gulgong.

Their League Tag side continued their impressive 2022 form when they recorded a 22-14 win over the Roosters to remain undefeated.

The first grade encounter saw the home side come from behind, at one stage trailing 12-0 during the first half, and then 12-8 at the break and again 18-8 during the second stanza before scoring 18 unanswered points to lead 24-18.

However, the Roosters then scored to lock it up at 24-all before the Terriers had the final say, with a converted try securing them a thrilling 30-24 victory.

Unfortunately, COVID-19 still has an influence on the Castlereagh competition and an outbreak amongst players from the Trangie club saw their games against Baradine having to be called off.

The Boronia Cup will be on the line this Saturday at Dunedoo when the Swans host the Baradine Magpies.

The Swans first grade side will be buoyed by their display against the Panthers last Friday night whilst the Magpies will be keen for a run after having their game against the Trangie called off and having had the bye in Round Two.

The league tag clash between these two clubs never fails to attract a lot of interest and Saturday’s encounter should not disappoint and a big crowd is expected to be at Robertson Oval early to take it in.

Similarly, Narromine’s Cale Oval should be packed out to see the top of the table clash between the Jets and the Coonamble Bears.

The Bears young side has impressed so far this year with their willingness to throw the ball around winning them much praise. Whether or not the Jets can contain the expansive style of football that the Bears have been playing will go a long way to deciding who will be sitting alone on top of the table come Saturday afternoon.

Gulgong and Gilgandra will be in action at Gulgong and in both grades the results will have a big influence on the shaping of the competition ladder in the early stages of the 2022 competition.