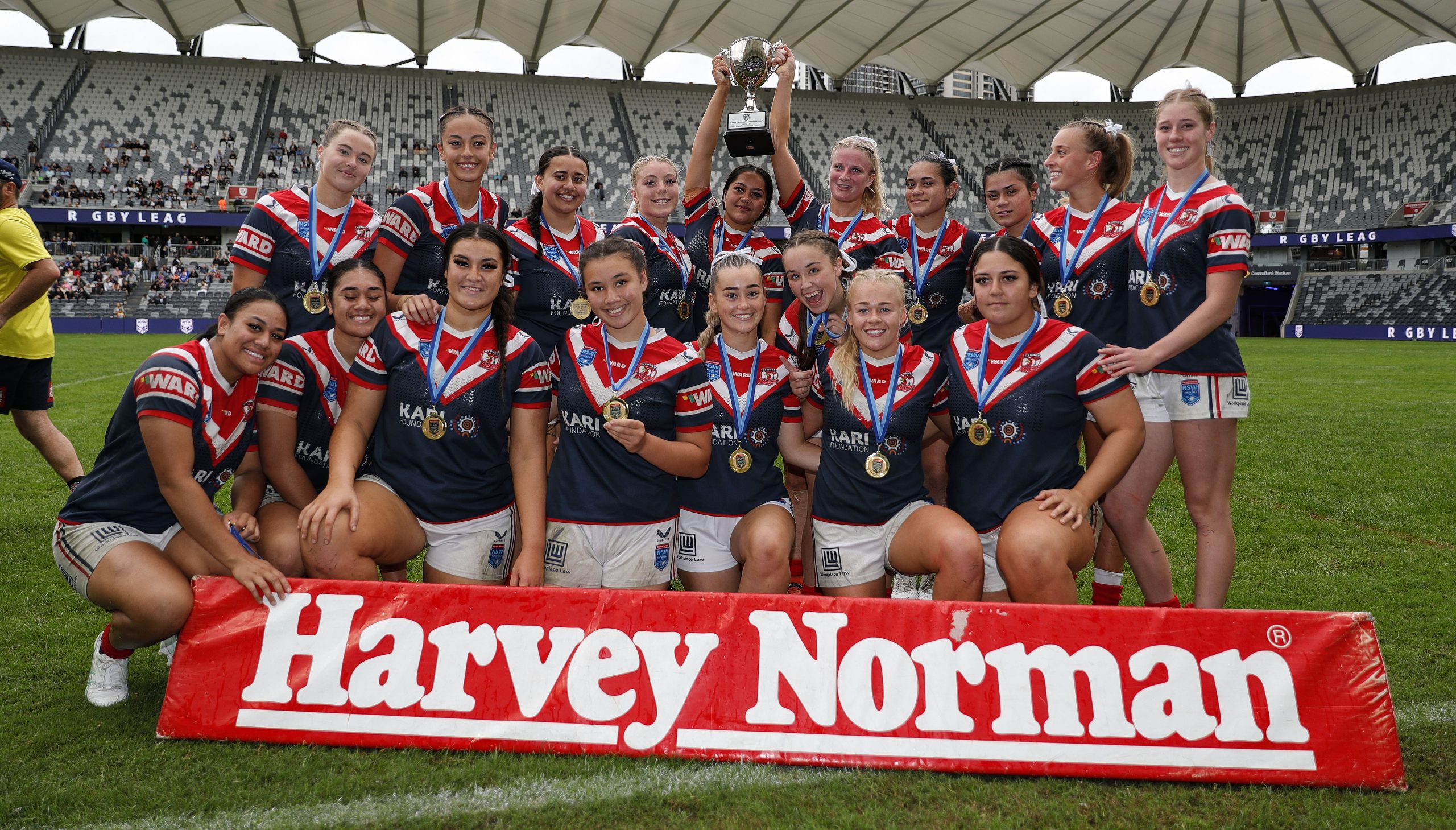 The Indigenous Academy Sydney Roosters have held on for a thrilling 12-10 win against a gallant Newcastle Knights in the Harvey Norman Tarsha Gale Cup Grand Final at CommBank Stadium today.

The result was a welcome relief for the Roosters, who had also made the Grand Final last year but went down on the day to the St George Dragons. There was little separating the two sides during the match, with barnstorming Roosters back-rower Otesa Pule proving to be the difference after scoring a brilliant, individual try in the second half.

“The biggest thing for us was making sure we got our processes right and I feel like throughout the week we did,” Roosters coach Blake Cavallaro said.

“The biggest thing I said was when the going gets tough, the tough gets going and the got tough and they did the job.

“It’s an awesome scene for our female pathways, with the NRLW and the Tarsha Gale. These girls will be definitely pushing the NRLW girls and it’s a great start for our club.”

The Roosters had headed into the Grand Final with the best defensive record of all the teams and were keen to go one better after last year’s result. The Knights also had plenty of motivation after finishing as Minor Premiers last year before bowing out in the finals race.

The opening 40 minutes was fiercely contested, with end-to-end action and solid defence from both teams on their line. The Roosters were being led admirably up front by props Kalosipiani Hopoate and Milly Lupo, while Pule came close to scoring after a damaging run which ended with her being held up over the line.

The Knights were also asking plenty of questions of the Roosters defence, with Tori Brazier making a promising break down the sideline with support on her outside and the try-line beckoning but unfortunately the final pass went to ground. Replacement forward Lexi Beagan also went close after charging at the line but was denied by the Roosters desperate goal-line defence.

It took until the 24th minute for the deadlock to finally be broken after Roosters fullback Jada Taylor put through a grubber kick which was picked up by winger Zoe Cass, who then stepped back inside to race away untouched and score underneath the posts. Hooker Ally Bullman converted to hand the Roosters a 6-0 lead at half-time.

While points had been hard to come by in the first 40 minutes, they flowed freely when the second half resumed after Beagan busted through the defence from the kick-off and made a long run to put the Knights on the front foot. With momentum behind them, the Knights worked the ball to the left and hooker Sophie Clancy went herself from dummy-half to score a much-needed try. Clancy then converted to lock the scores up at 6-all.

A Roosters knock-on in their own end opened the door for the Knights and they took advantage after a quick spread to the left ended with winger Kasey Gaukroger showing great presence of mind to plant the ball down one-handed as she was being dragged into touch. Clancy missed the extras but the Knights had their noses in front 10-6.

The Roosters needed something special to spark them and Pule – who has scored doubles in four games this season – answered the call when she caught the marker defence napping and made a 50-metre beak to score underneath the posts. Bullman converted to put the Roosters back in front 12-10 with plenty of time left for both teams.

The action was frantic to end the match with the Roosters digging deep in defence to hang on for the win and spark scenes of jubilation having now gone one better.