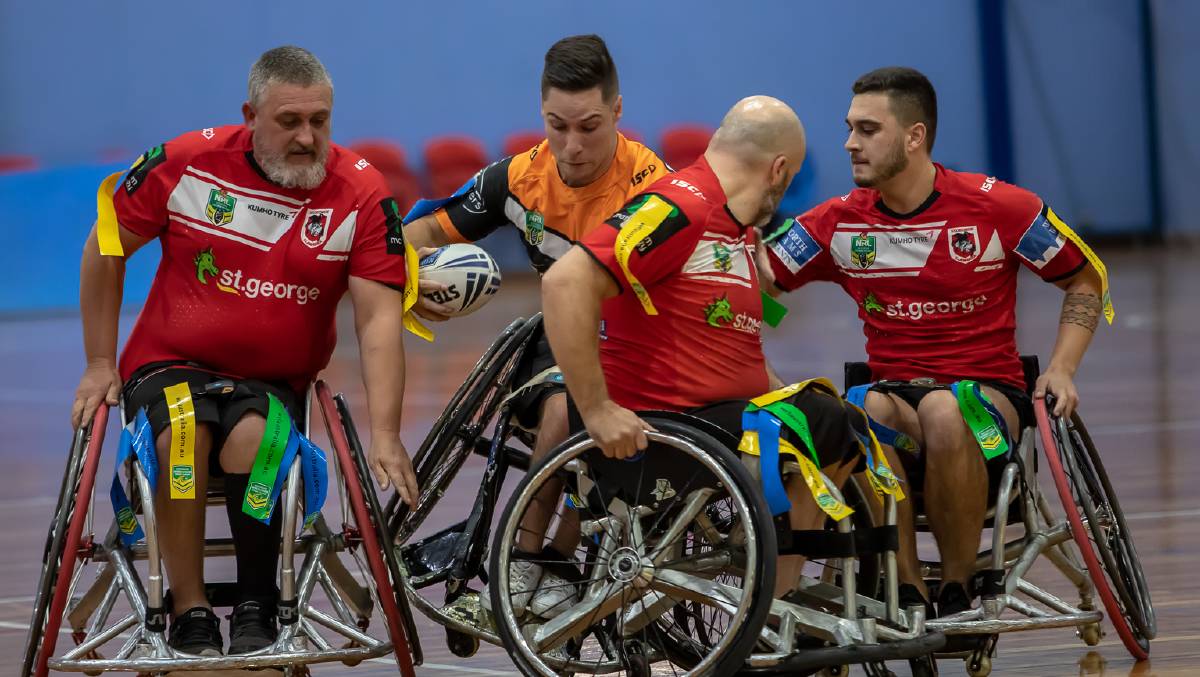 On Sunday at the Menai Indoor Sports Centre the Dragons are aiming for a fifth consecutive NSW premiership when they face the Parramatta Eels at 4pm in the NSW Cup Grand Final.

The curtain-raiser at 3pm will be the NSW Plate (Tier 2) Grand Final between the Cronulla-Sutherland Sharks and Penrith Panthers.

For the Cannane family, they’ve been a part of seven Grand Final wins in total giving a clue as to why the Dragons have enjoyed such a hot streak.

“Myself and my son have played a lot together, so we have a really good connection,” Craig said.

But it’s no easy task this year as Eels players, captain-coach Brett Henman and teammate Diab Karim were part of the Dragons line-up last year that beat the Canberra Raiders to win the NSW Cup.

“It’s a case of friends become enemies for a day,” Craig said.

“They know our combinations and skills, so they have a pretty good idea of how we like to play.”

Craig and Cory were last month named in the 12-man Wheelaroos squad for November’s Rugby League World Cup. Joining them will be Rick Engles, who is the third Australian player in the Dragons line-up on Sunday.

“The three of us have played a lot together but Parramatta also have a strong outfit with another two Wheelaroos (Liam Luff, Diab Karim) in their side,” Craig Cannane said.

“We’ve got three new players in our side, but we’ve worked hard on our communication.”

Craig Cannane is also captain-coach of the Dragons and doesn’t find it difficult juggling both.

“I keep my cool, keep my head on what we have to do each game,” he said.

“I’ve got to be prepared to talk to them on-field and then give those pre-game and half-time talks. So, I keep my talk during play and then at half-time and full-time about working on our positives.”

Henman is also at ease with managing the two roles of captain and coach.

“The coaching role is spread across the team essentially. I don’t find it too difficult as there’s only five players on court at any one time – not 13 – which makes it much easier,” Henman said.

“For me it’s more about keeping my cool and trying to lift the boys rather than finding faults.”

Henman acknowledges the strength of the Dragons outfit over the past five years.

“I’m not daunted by it, I’m more excited because we’ve got a good Eels team this year that can definitely match them,” he said.

“We just have to make sure we play a nice, tidy game.”

Wheelchair Rugby League is played by two teams of five on a 50-metre indoor ‘field’, most often basketball courts, which is half the size of a regular 100m outdoor field.

Rules and the points system are the same – players must pass backwards, possession changes after six tackles. A ‘tackle’ is made by ripping off the Velcro shoulder tag of an opposition player, similar to Monarch Blues Tag.

Kicks downfield, conversions, penalties and field goals are hand-punted over the crossbar. A play-the-ball is made by tapping the football on the ground before passing.