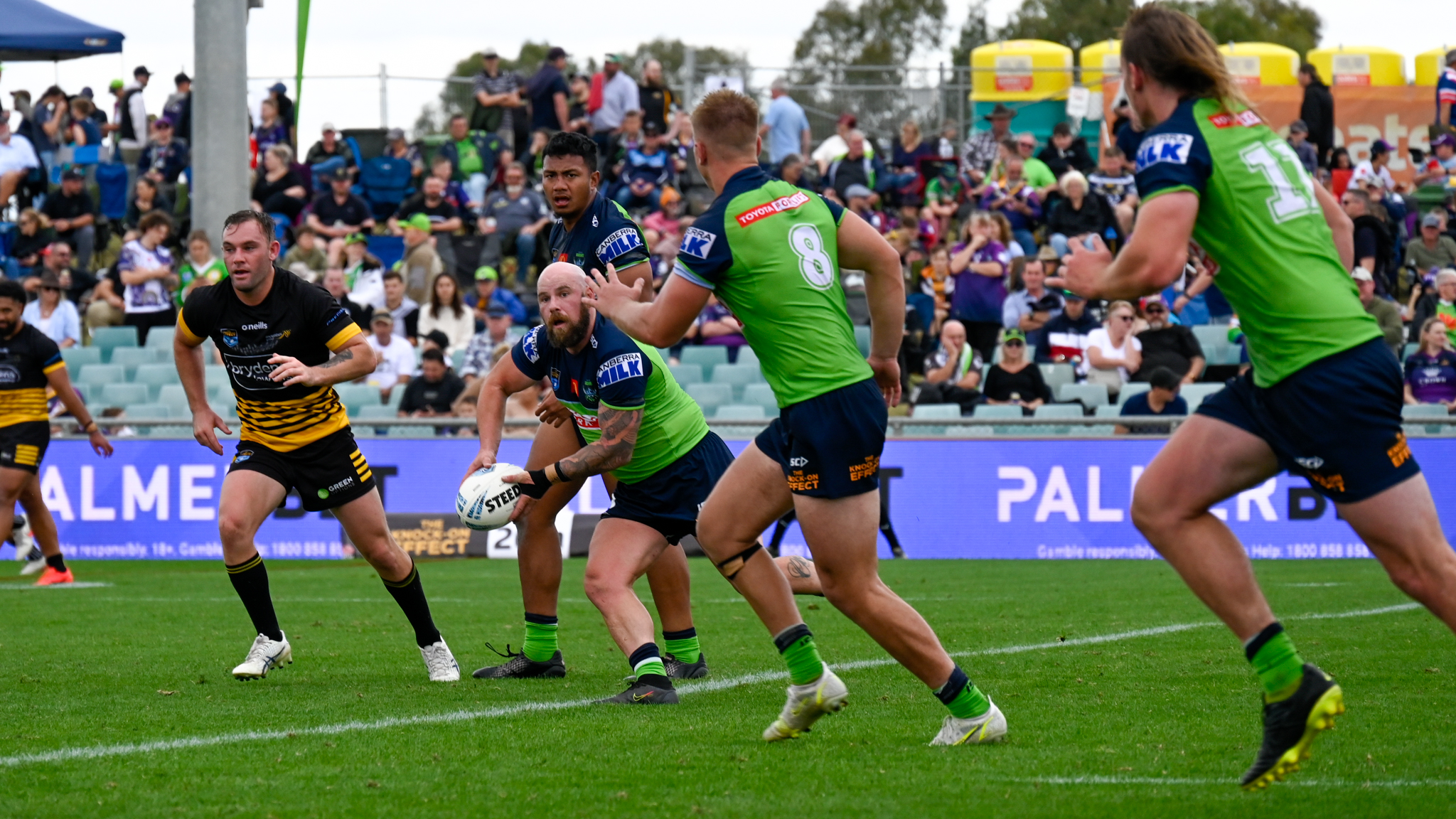 Canberra Raiders too strong for Mounties in NSW Cup

The Canberra Raiders NSW Cup side have come from behind at half-time to win their third game in a row, defeating the Mounties 30-16 on Saturday afternoon.

In front of a vocal Wagga Wagga crowd it was a masterclass from Canberra’s forwards that propelled them to victory, with Clay Webb and Englishman Harry Rushton the standouts.

Despite the result it was unfortunately not the ideal start for the Raiders, with the Mounties scoring against the run of play in the sixth minute.

It was lock Ben Seufale who was able to crash over under the uprights, with Jarrett Subloo converting to give the away side an early 6-0 lead.

A training park play from the Raiders left side got them back into the match, with quick hands from Xavier Savage and Jarrod Croker off a scrum eventually finding Utuloa Asomua who made no mistake, scoring in the 18th minute.

Croker had no troubles on the conversion attempt, with the experienced kicker drawing the scores level at 6-all.

Despite the Raiders having chances to take the lead it was the Mounties who were able to score a heartbreaking try on the stroke of half time through Tim Simona, who found space after a cut out ball from five-eighth Brad Abbey.

Subloo added the extra two, leaving the Raiders with work to do as they went into the sheds 12-6 down.

It didn’t take Canberra long to get back into the match, after a beautiful short ball from Harry Rushton found Clay Webb close to the line in the 45th minute.

The towering second rower made no mistake from close range, and after a simple conversion from Croker the scores were again level at 12-all.

An 80 metre try from James Schiller was enough to give the Green Machine their first lead of the match, after the winger capitalised on an error and ran the length of the field in the 52nd minute.

He was able to run the ball in next to the right upright, with Croker converting to make it a six-point game.

A moment of pure magic from Harry Rushton extended the lead to 10, after the Englishman used his soccer skills to score in the 58th minute.

The prop grubbered to himself before kicking it again off the ground around Subloo, scoring just before the dead ball line to give the Raiders a 24-12 lead after another successful Croker conversion.

The Mounties did however mount a late comeback of their own, when Dane Akuafolau crashed over on the short side in the 67th minute.

Subloo couldn’t add the extra two points, leaving the Raiders up 24-16 with just 11 minutes to play.

A late Clay Webb try put the Mounties chances of a victory to an end, finding room in behind after a perfectly placed kick from Sione Vuki.

Croker added the two points to compete his perfect day with the kicking tee, leaving the Raiders as 30-16 winners.

The Raiders will now move their sights to next Sunday, as they look to make it four wins in a row when they play the high-flying North Sydney Bears away from home.