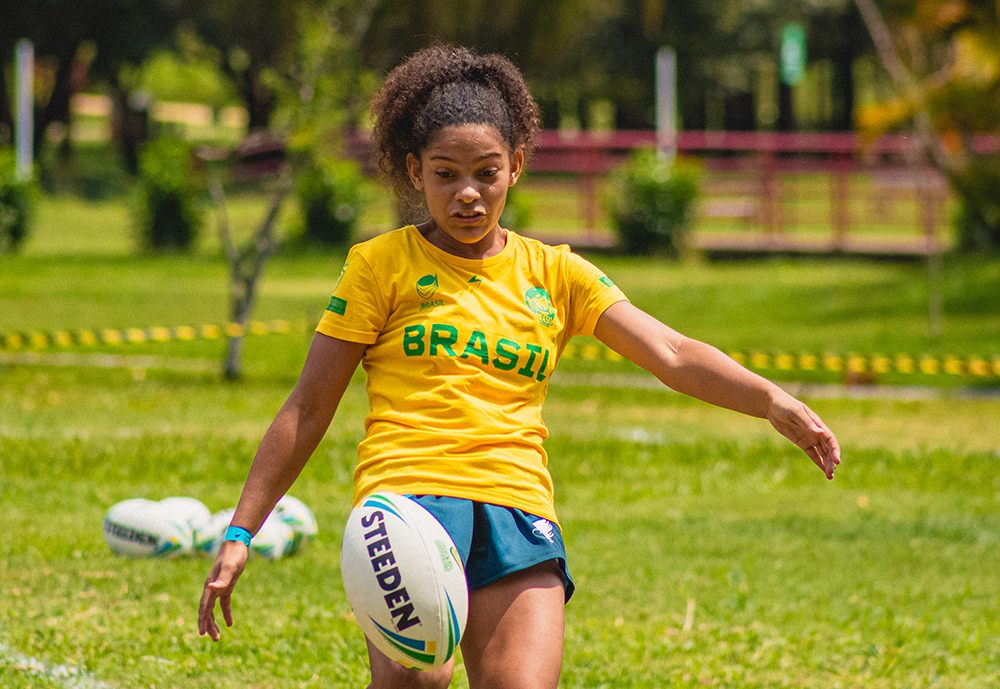 Brasil Rugby League has welcomed news its women’s team will receive automatic qualification for the 2025 Rugby League World in France, while its men’s team has also been given an increased opportunity.

News the Amazonas will not only feature in this November’s Women’s World Cup in England, but will also pre-qualify for 2025, was received the same day BRL staff met to discuss player mental health.

“Truthfully, we have just emerged from a meeting where we discussed the mental health of our players at length – specifically the support of players who miss this year’s final World Cup squad,” Chief Operating Officer Hugo Fróes said.

“It is not something we have ever mentioned to the International Rugby League, and I stress it has never been used as any sort of bargaining chip in the consultation process, but it is a very significant preoccupation.

“Some women have now trained for four years specifically in the dream of making the World Cup. We had around 160 women participate in last year’s Brazilian domestic championships, but only 24 can go to England.

“The cost of travel to participate in just one club game in Brazil is often equal to a month’s wages, such are the distances and logistics involved.

“Our women and volunteer staff have made immense sacrifices – exacerbated by the postponement of the 2021 World Cup – and certainty about World Cup qualification in 2025 is as a massive boost.

“Women who do not qualify for this year’s World Cup have something on the near horizon to keep their spirits high, and it will undoubtedly lead to a stabilisation of player registration numbers around Brasil.”

The International Rugby League has revealed three (3) teams from the Americas will qualify for the Women’s World Cup in 2025, with Brasil and Canada guaranteed two spots.

In the Men’s World Cup, two (2) teams from the Americas can possibly qualify in 2025, provided Jamaica reaches the quarter-finals of this year’s tournament.

This means Brasil’s men could potentially qualify for the 2025 tournament, should they win the South American Championship in Colombia in late 2022, then win the Americas Championship in 2023.

Brasil team manager Robert Burgin, who is also a Steering Committee member for the nascent Americas Federation, an Asia Pacific Rugby League representative for South America, and founder of Latin American Rugby League, said the news was a fantastic advance for the entire region.

“The key to broader participation in rugby league is the word ‘possibilities’,” Burgin said.

“The International Rugby League has opened up more possibilities than ever before, and my firm belief is that will not only keep more players in the sport, but also more volunteers, fans and sponsors.

“People want to see a glimmer of opportunity in front of them and will do amazing things to realise their dreams.

“We will see more World Cup qualifier games than ever before in advance of the 2025 World Cups, across men’s, women’s, wheelchair and youth categories, and this will increase the sense of excitement and expectation.

“In the Americas, aside from Brasil, the door is ajar for female teams from neighbours like Colombia, Chile and Argentina to grab that third spot, though they will face stiff competition from the likes of the USA and Jamaica, maybe even El Salvador.

“In the men’s category, only this month we saw Chile record a massive upset against the Philippines, and while the pathway for men’s qualification is much tougher, the Latino spirit ensures all nations vying for the limited places will compete with absolute dedication.”

Announcement of the increased qualification pathways for the French World Cup in 2025 arrives at the same time that nations are celebrating a 10th consecutive year of rugby league activity in Latin America.

While Brasil, Chile, Colombia and El Salvador already hold official membership with the International Rugby League, other nations such as Argentina, Peru, Uruguay, Mexico, Nicaragua, Honduras and Ecuador have witnessed domestic activity and could be expected to ascend to IRL affiliation.