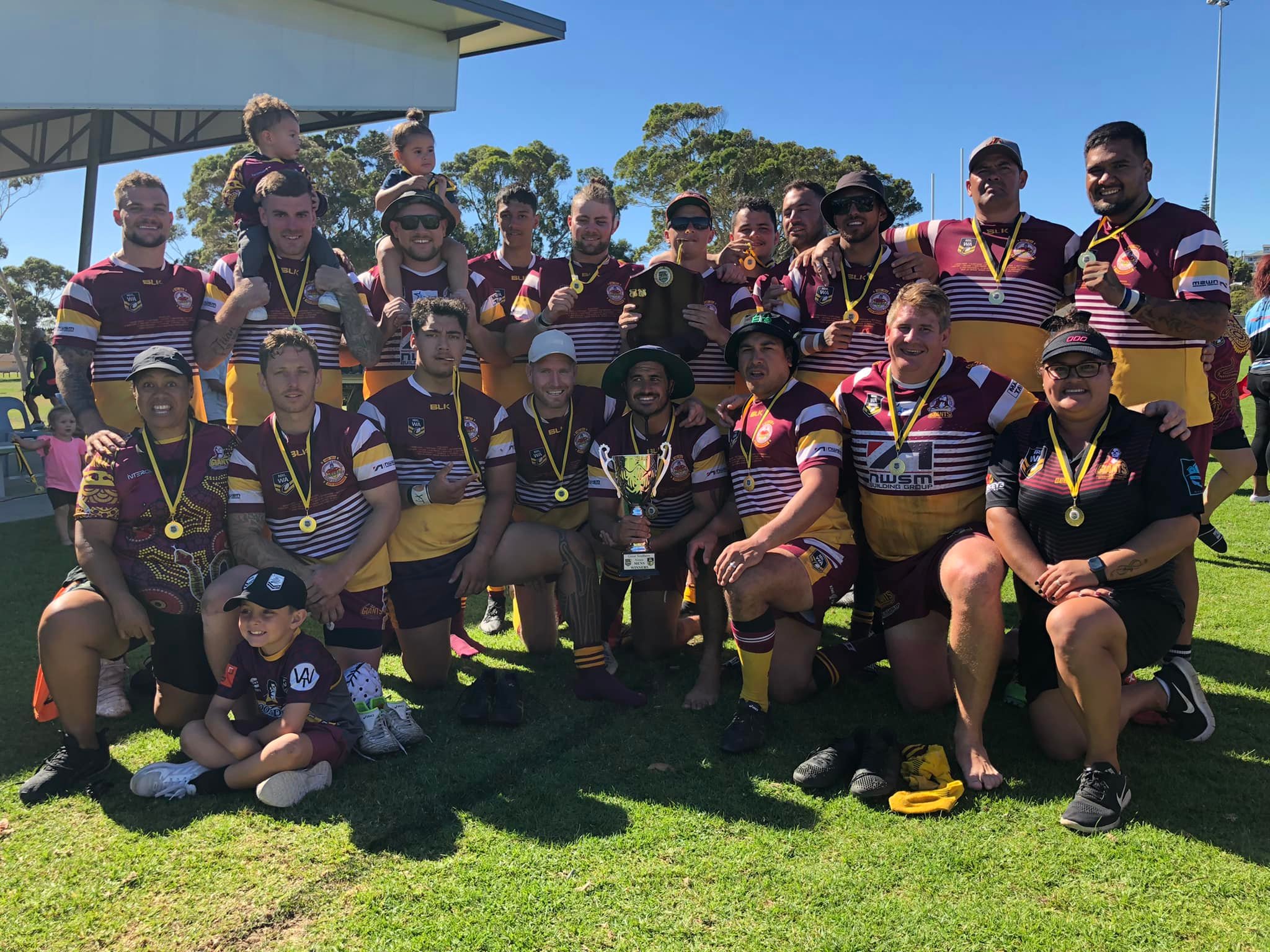 While the Roosters couldn’t come to defend their title, the Joondalup Giants debuted and proved to classy for the once again beaten finalists the Western Fijians. In a complete performance, the Giants suffocated the free flowing Fijians with some amazing defence and ultra disciplined offence. While the Fijians will rue a bunch of lost opportunities with the elements contriving against them.

A fantastic weekend, hosted yet again by the Albany Sea Dragons, saw the hosts fight bravely. While showing flashes of brilliance mixed in with some great speed, they ultimately were outmatched by more experienced opponents. And the returning Mandurah Storm proved plucky once again. Scoring some brilliant tries and picking themselves up off the canvas time and again to throw themselves into the fray. Even the opposition were commenting on the toughness of the diminutive Storm side.

The story of the weekend was the arrival of the South Hedland Cougars. One of our most northern clubs, travelling 2000kms to play in a tournament in the most southern port of Western Australia, and did they turn some heads. One of the most enjoyable teams to watch, they drew some admirers with their powerful and no nonsense rugby league, and it was great to see them getting involved. Gur Wirimalpa also debuted in the Albany competition, and just like their ladies, they brought alot of fire and community to the event. With their supporters getting involved, the men played with amazing enthusiasm and took most teams right to the wire, with their game against the hometown Sea Dragons, one of the games of the tournament.

But it all finished with the free flowing Fijians, who showed their patented brand of no fear, high risk and high reward football going through the group stages undefeated. Scoring some scintillating tries, they were on a collision course for the Joondalup Giants from the start, with the Giants losing narrowly to the Fijians in the first game, after a virtuoso performance from Jona Naborisi, but accounting for every other side with professionalism and ease. In their 5 pool games the Giants scored a stunning 142 points, at an average of 28.4 a game, they only conceded 34, to have the best offence and defensive record for the carnival.

And in the final it was a complete contrast of styles. The Fijians threw caution to the wind from the opening whistle and lived by the sword, making some costly errors and allowing the Giants to take control. In a credit to themselves, the Fijians defended whole heartedly for a long period, before the errors finally told, with unsung hero Lincoln Pomare-Eriha scoring a beautiful solo try to kick off the Giants. And when the Fijians made another error off the restart, the Giants quickly spun to ball to youngster Tyzan Hita-Duval, who put the hammer down from 70 metres out and showed superb pace to beat off all comers. This allowed the Giants to stay in control, and with a halftime score of 8-0, the Western Fijians really had to start the second half well to be any hope.

But the suffocating defence of the Giants seemed to have no end, and with the wind playing havoc with the Fijians ability to promote the football, the Giants continued to knuckle down. With both teams getting a bit heated, and some niggle entering the contest, a brilliant offload was then followed by a direct run from Davey Martin, who made no mistake and dotted down right next to the post. The ensuing successful conversion from Gus Marshall put the Giants up 14-0, and while the Fijians scored a quick consolation try to Saimoni Qaranivalu in they dying stages, it was all too little to late. The siren went in the background, and the Giants celebrated their first Great Southern Nine’s tournament in style.