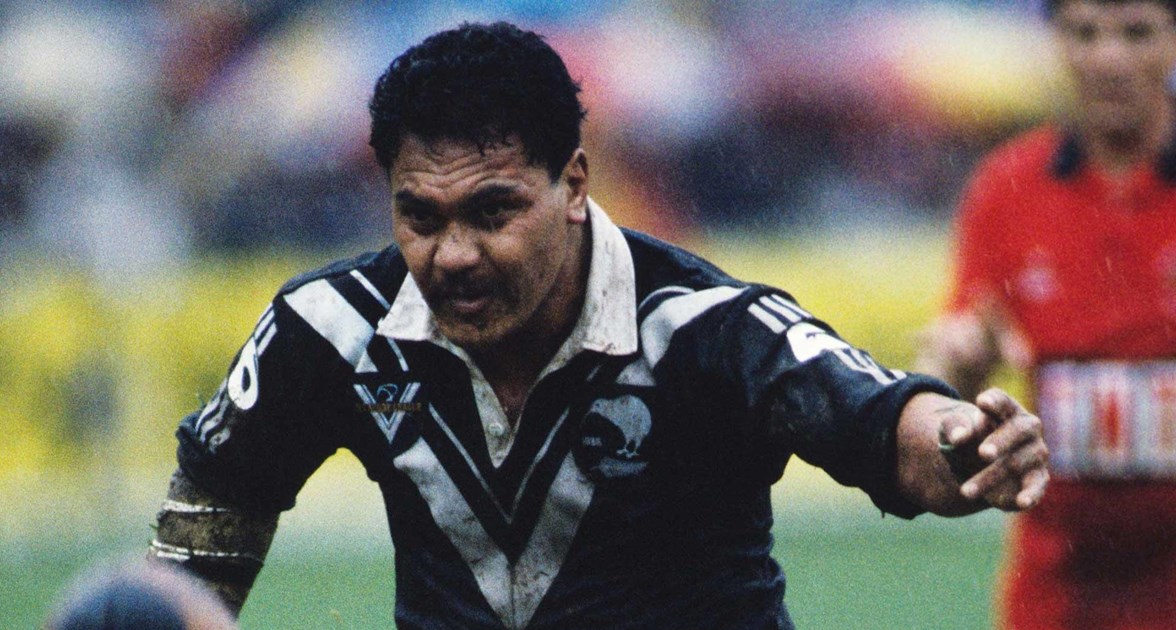 The rugby league community in New Zealand and worldwide is mourning the loss of one of the Kiwis’ greatest and most unique players, a Pasifika and Māori sporting icon and a beloved character, following the passing of Olsen Filipaina, aged 64.

Filipaina was admitted to hospital with a stomach infection on January 13, exacerbating a long-standing kidney problem. He died on February 10th in Sydney, surrounded by family.

‘The Big O’ scored 108 points in 29 Tests for the Kiwis from 1977-86 and was inducted as a NZRL Legend of League in 2007. But the bare figures and accolades tell only a small part of the blockbusting, trail-blazing centre/five-eighth’s story

Filipaina’s career is framed by his world-beating performances for New Zealand against Great Britain in 1984 and Australia in 1985, but his decade on the international stage is strewn with crowd-pleasing highlights. Meanwhile, idol status at grassroots club level with a pair of Hawks outfits – Auckland’s Mangere East and Ryde-Eastwood in Sydney – bookended eight seasons in the NSWRL premiership, where his brilliance flashed brightly but infrequently, with crusty Australian coaches unable to effectively harness and utilise his dynamic talents.

Born in Kaikohe to a Samoan father and Māori (Ngāpuhi, Ngāti Hāmoa) mother, Olsen moved to South Auckland with his family as a young boy and rose through fledgling Mangere East’s ranks. An inspired spectator in 1971 as New Zealand powered to a stunning 24-3 victory over Australia at a muddy Carlaw Park, a ground he would dominate on countless occasions over the next 15 years, Filipaina captained the Schoolboy Kiwis the following season.

Filipaina’s explosive performances and prolific tryscoring for Mangere East garnered a debut for Auckland in 1976. A Kiwis call-up quickly followed – just a month after his 20th birthday – at the 1977 World Cup, selected at centre for the matches against Australia and Great Britain, as well as featuring in Auckland’s remarkable ‘Grand Slam’ achievement, where the provincial side beat Australia, Great Britain and France in the space of 17 days.

On a 1978 tour of Australia that produced few highlights, Filipaina’s blistering form was a vivid silver lining. He starred against the incomparable centre pairing of Steve Rogers and Mick Cronin, before scoring three tries in the Kiwis’ 30-21 victory in their maiden Test match against Papua New Guinea at Port Moresby. The tyro was named New Zealand’s Player of the Year.

Filipaina’s genius lit up the 1979 season, scoring a staggering 261 points for Mangere East (25 tries, 93 goals), nine tries in 10 games for Auckland, and a try and five goals in the Kiwis’ series loss to the touring Great Britain Lions.

Boasting remarkable pace and agility for a player with such an imposing frame, a trademark bump that rebuffed myriad defenders and a crafty kitbag of skills – included a phenomenal penchant for a chip-and-regather – Filipaina was an attacking freak. Stadium-shaking defence somewhat belied his gentle, shy nature but completed the picture of one of the era’s great entertainers and game-breakers.

Balmain belatedly lured Filipaina across the Tasman in 1980. He spent five seasons with the Tigers, moved to Eastern Suburbs for a one-year stint in 1985 and played two seasons at North Sydney. Filipaina played 109 first-grade games (scoring 21 tries and 128 goals) but was regularly relegated to reserve grade, a convenient scapegoat for under-pressure and impatient coaches ill-equipped to let his talents flourish.

Injury kept Filipaina out of the 1983 Test series against Australia, which included a famous Kiwis upset at Brisbane’s Lang Park. Despite being stuck in reserve grade at Balmain for several weeks midway through 1984, New Zealand coach Graham Lowe had no hesitation in picking Filipaina for the home series against Great Britain. Playing five-eighth at Test level for the first time, the 27-year-old terrorised the Lions. His thundering runs, deft ball-playing and the tourists’ tactic of double- and triple-teaming the leviathan in the No.6 jersey opened up repeated opportunities for his three-quarters Fred Ah Kuoi, James Leuluai, Dean Bell and Dane O’Hara, who between them scored 10 of the Kiwis’ 12 tries in a 3-0 whitewash. Filipaina added 12 goals and was man-of-the-match in the third Test.

Another stint in reserve grade with the Roosters in 1985 set the scene for Filipaina’s finest hour. He was man-of-the-match in the first two Tests against Australia in Sydney and Auckland – both won by the Kangaroos courtesy of last-gasp John Ribot tries – including a memorable try-assist and four-pointer of his own in the series opener.

Fourteen years after witnessing the Kiwis’ demolition of Australia first-hand as a 14-year-old at Carlaw Park, Filipaina led a drought-breaking – and equally emphatic and iconic – defeat of the green-and-golds at the same venue in the third Test of the ’85 rubber. He produced two audacious chip-and-chase efforts in the same set in the lead-up to Clayton Friend’s opening try and comprehensively outplayed opposite number and Australian captain Wally Lewis, widely regarded as the world’s best player, for the third straight game in an 18-0 thumping.

Man-of-the-series honours were a mere formality for the moustachioed cult hero.

“Olsen is the player who sticks out in my mind,” Lowe recalled for a 1992 documentary. “Wally has spoken to me about it since and said everywhere he looked there was just the big figure of Olsen pounding through – he just inspired everybody.”

Filipaina toured Britain and France with the Kiwis at the end of that season, playing in all five Tests and captaining New Zealand in the second Test at Wigan’s Central Park in Mark Graham’s absence. His decorated tenure in the black-and-white jersey concluded with the disappointing series loss in Australia in 1986, which saw him become only the second New Zealander to pass a century of points in Tests after Des White.

A barnstorming opening try in the second Test at the SCG – steamrolling a defender before accepting a return offload from Graham to dive over – was vintage Olsen.

Filipaina captained Western Samoa at the 1988 Pacific Cup, where his side lost the Apia-hosted final narrowly to New Zealand Māori, and was named Sportsman of the Tournament.

Supplementing his football income with early-morning runs on the back of a rubbish truck, Filipaina was affectionately called ‘The Galloping Garbo’ – and the humble rugby league wizard celebrated in one more magnificent on-field success away from the spotlight. The 33-year-old, teaming up with former Kiwis halves partner Friend, captained Ryde-Eastwood to Grand Final glory in the inaugural Metropolitan Cup competition in 1990.

Filipaina’s mythical status among rugby league diehards has only gathered momentum as the years and decades since his retirement have passed. But he received widespread and richly-deserved recognition in 2020 via the release of Patrick Skene’s captivating, thought-provoking and heart-warming biography, The Big O: The Life and Times of Olsen Filipaina, Pacific Revolution Pioneer. His importance locally was underlined last year when Auckland Rugby League named its newly-established 20s competition the Olsen Filipaina Cup.

The outpouring of support and love from every corner of the rugby league community during his recent health battle reflected the person – more so than the player – Olsen was.

New Zealand Rugby League extends its deepest sympathies to Olsen’s family, friends and legion of fans as they farewell a truly extraordinary individual.