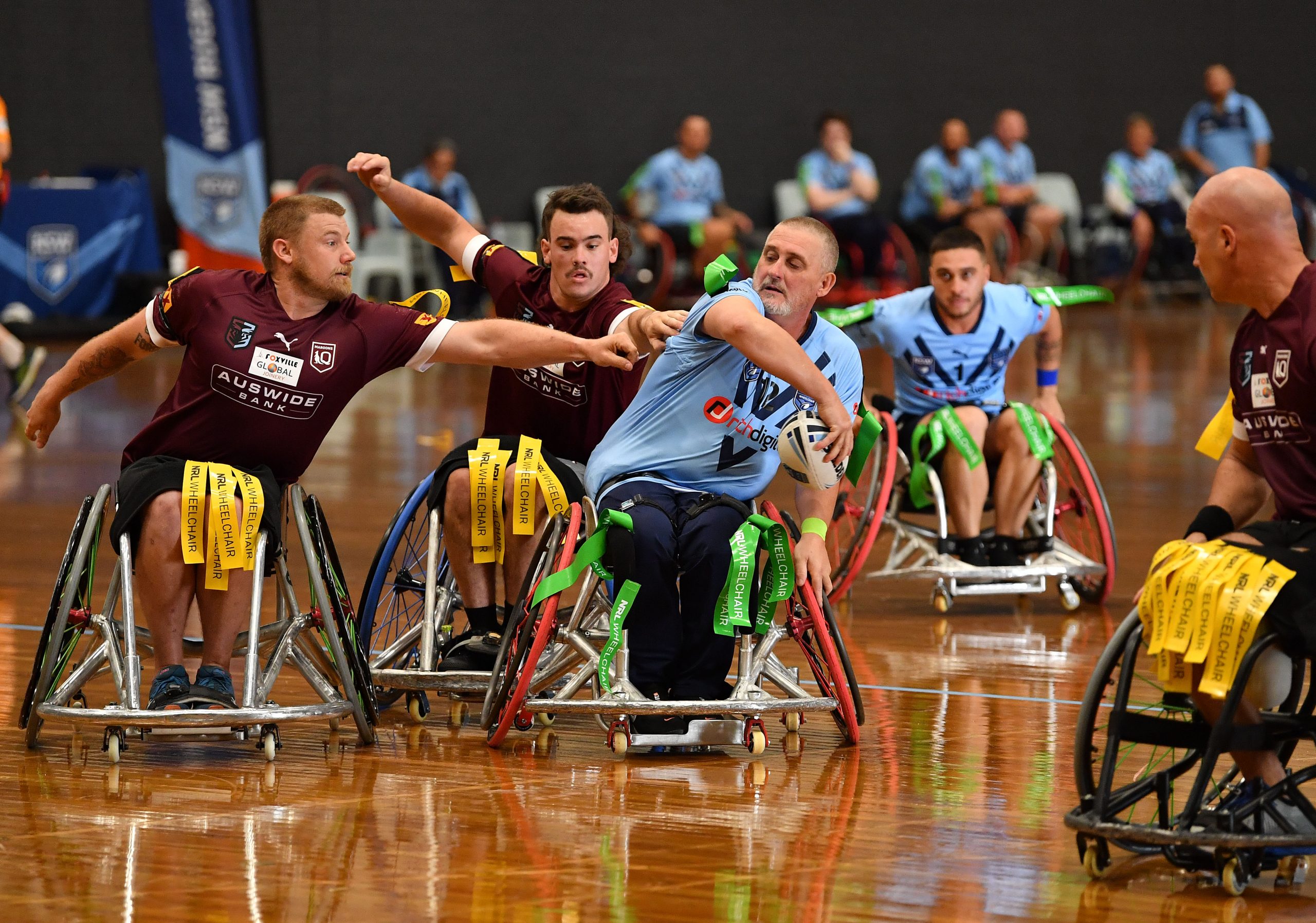 Queensland proved too strong for NSW with a dominating 50-30 win in the Wheelchair State of Origin match in Sydney today, recording their first win of the interstate series.

For eight years the Blues overwhelmed the Maroons playing for a Challenge Cup. But in 2019 the State of Origin concept was born. NSW won it 52-4 before the Covid pandemic shut down the 2020 and 2021 scheduled games.

Today’s match was the postponed 2021 game from last June, and with Queensland’s win it is now 1-1 on the Origin stage.

“Our guys are feeling it. Congratulations to Queensland because they outplayed us today. It’s back to the drawing board,” said NSW coach Edie George.

And on that board will be an emphasis on defence, since the Maroons scored nine tries to the Blues five at the Whitlam Leisure Centre in Liverpool.

“We put more emphasis on attack than defensively and that showed. We didn’t read their plays well enough,” George said.

“We needed to hold them out and we didn’t. They were camped in our red zone on the back of our own penalties and silly mistakes.”

“That two-year gap hurt us. Queensland haven’t been totally locked down so they’ve been able to get together and keep on working and keep their competitions going,” Cannane said.

“Across the field they were conditioned better than us. We’ve got to put in more hard work and get our fitness back to what it was before.

“They were fitter and stronger across the whole field. That’s what we’ve got to do,” he said.

“That result will burn a bit for the next six months but we’ve got the NSW Cup to play, and City-Country and then back into Blues camps. I take my hat off to Queensland but we’re not done yet.”

Queensland took a 28-18 lead into halftime off the back of five tries to NSW’s three.

It was tit-for-tat points from both sides early for scores to be locked up three times. But late in the half Queensland scored back-to-back tries through Zac Schumacher and Adam Tannock to surge to the lead.

They compounded the Blues misery not long after the break, with two quick tries to Peter Arbuckle to take the score out to 38-18.

NSW pegged one back through Rick Engles but the Maroons scored two more four-pointers to reach their half-century 50-24 and take a stranglehold on the match.

A length of the field try to Engles for his double gave NSW a little hope but it was all too late.

Two players made their debuts for the Blues – Edie Morgan (Dragons) and Tim Robinson (Raiders).

Cannane, who is Craig’s son, scored two tries, while Grove was a constant thorn in Queensland’s side.

“They played out of their skins today. Corey is always so strong up the middle and Brad has such speed down the sidelines,” George said.

“We’ve got another Origin in less than six months so we’ll be more prepared for that one.”

The two players’ awards today both went to Queensland: Adam Tannock was given the ‘Spirit of the Game’ trophy, while goal-kicker with 6-7 for the match, Bayley McKenna was named ‘Man of the Match’.

Watching proceedings was Australian coach Brett Clark, who will name a 13-man Wheelaroos squad in a fortnight so training camps can be organised ahead of November’s World Cup in the UK.

The 2022 Wheelchair State of Origin will be held in June with Clark able to add or subtract from his 13 based on form, or injuries.