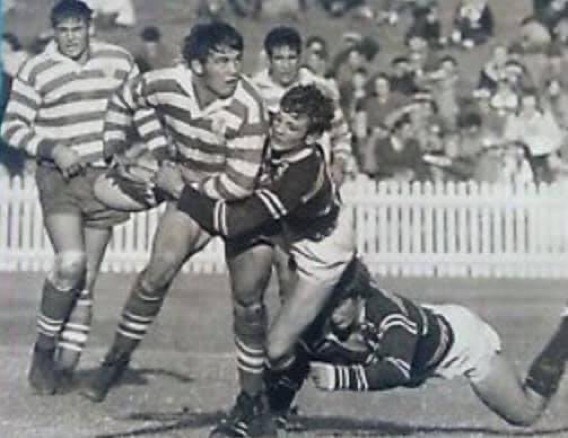 The NZRL community is mourning the loss of one of New Zealand’s best-ever front-rowers, Kiwi #460 Bill Noonan, who has passed away in Sydney, aged 74.

Noonan played three Tests for New Zealand in the late-1960s, but arguably carved out a greater legacy as a trailblazer in Sydney, making 196 first-grade appearances for Canterbury-Bankstown and Newtown from 1970-80 – then a record for a non-Australian.

Noonan played the first of 25 games for Canterbury as an 18-year-old hooker in 1965, featuring in the province’s 19-4 loss to Australia that year and coming in for special praise after matching Newcastle Team of the Century rake Allan Buman in the scrums. He also represented in Canterbury’s 53-6 loss to Great Britain the following season.

Still only 20, Noonan earned a place in the Kiwis’ squad to tour Australia in 1967. He debuted against Riverina and scored tries in matches against Brisbane and Ipswich, before getting his Test spurs as a replacement in the second clash with Australia, a 35-22 loss at Lang Park.

Noonan missed selection for the 1968 World Cup but celebrated in Linwood’s CRL premiership success. After touring NSW with a New Zealand Under-23s side, he was recalled by the national selectors to take on the 1969 Australian tourists. The 15-stone tyro played at prop in the 20-10 series-opening loss and scored a try from the second-row as the Kiwis squared the two-match series with an 18-14 boilover, ending a sequence of 15 Tests without a victory.

It would be Noonan’s last appearance in the black-and-white jersey, however. Following the repealing of the NZRL’s archaic transfer ban, he was one of the first young Kiwi stars to head across the Tasman – and the first major signing by now-legendary Canterbury-Bankstown secretary Peter Moore.

Moore had travelled to New Zealand to lure Canterbury and Test halfback Graeme Cooksley to the club. Cookesley turned Moore down, but ‘Bullfrog’ returned with the signature of a bruising forward entering his prime instead. Canterbury-Bankstown stumped up a $6,000 transfer fee for Noonan, who was subsequently precluded from representing the Kiwis, as per the rules of the day.

But Noonan set about becoming one of the Sydney premiership’s most respected forwards over the ensuing decade, coupling natural toughness, a good turn of pace and handy ball skills with a commitment to physical fitness. He played at least 14 games in each of his 11 seasons in the competition and created history (along with clubmate and former Kiwi teammate Henry Tatana, who came off the bench in the same match) by becoming the first Kiwi to play in a Sydney Grand Final in 1974.

Noonan and the Canterbury-Bankstown pack faced up to an Eastern Suburbs engine-room containing Australian Team of the Century forwards Arthur Beetson and Ron Coote, who inspired Easts to a 19-4 win.

An occasional captain for the Berries, Noonan played in further finals campaigns in 1975-76 and 1978, taking his tally of top-grade games for the club to 161, before accepting a lucrative deal to join the emerging Newtown Jets.

Noonan was set to retire after receiving a reduced offer for 1979 from Canterbury-Bankstown, but businessman and Newtown backer John Singleton stepped in.

“The first thing I said to him was, ‘save your breath John, I am not going to play for Newtown’,” Noonan told Rugby League Week magazine in 2009.

“The money wasn’t the only reason — John was a real go-getter and brought some quality players and a new professionalism to the club.”

Noonan played 35 games in two seasons for the Jets, who were building towards an eventual Grand Final appearance in 1981 under the tutelage of impressive young coach Warren Ryan. He was sent off and suspended for a high shot against his former club in the opening round of 1980 but reclaimed his place in the first-grade pack to play the last 16 games of the season before hanging up the boots.

In a nice piece of symmetry, Noonan’s last game was in his original position of hooker – his first appearance there in the top flight for more than three years – as Newtown upset semi-finalists Western Suburbs 23-20 at Henson Park.

Noonan’s record for the most games in the Australian premiership by a New Zealander was eventually broken by Dane Sorensen in 1988, while his status as a New Zealand rugby league great is secure for perpetuity.

NZRL extends its condolences to Bill’s family and many rugby league friends.