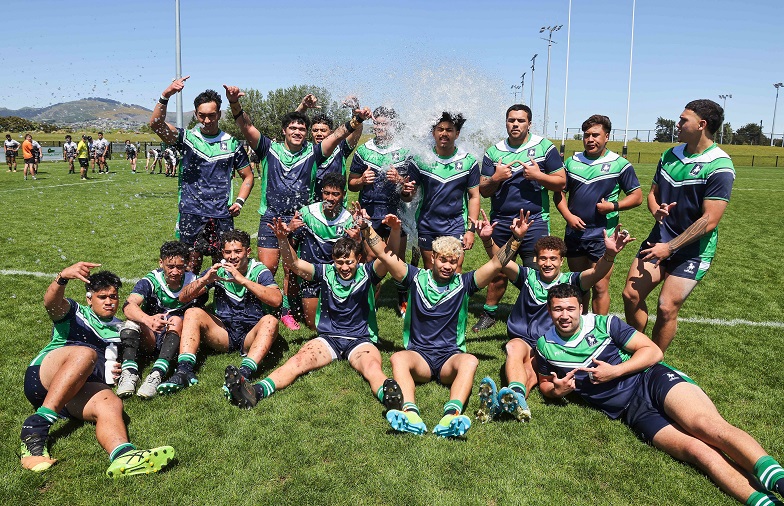 The action kicked off early on Sunday morning at the Ngā Puna Wai Sports Hub in Christchurch. The South Island were hosts for both 16s and 18s National Youth Tournament Finals. The Mid Central Vipers 16s were first up taking on the South Island Scorpions 16s.

The Vipers number seven Chance Sherrard-Chase sold the Scorpions a dummy to open the scoring in this final. The Vipers continued their attack on the right side, Tayne Harvey taking it over the line through a gap in the defense. A frustrated Scorpions team was penalised after Revelation Mumuta was caught offside with a shoulder charge which saw the Scorpions down a man near the end of the first half. Errors plagued the Scorpions throughout the first half, the Scorpions conceded another try to Vipers Ramses Ah Chong. The Vipers went into the sheds with the lead 18 – 0.

A far more composed Scorpions team emerged to open the scoring in the second half. Te Kaio Cranwell powered through five defenders to get points on the board for his team. Some individual brilliance from Viper’s Ah Chong saw him bust through four tacklers to go over to score his second try of the match. Scorpions continued to fight back with a try of their own by Aston Wilson, to close the gap by 12 points. Viper’s pressure and speed ultimately proved too much for the Scorpions, Vipers becoming the National Youth Competition 16s champions for 2021 winning the match 22 – 10.

Meanwhile in the highly anticipated second match of the day saw the Upper Central Stallions 18s face off against the top of table Southern Zone 18s.

The Stallions and Warriors Youth player Tamiro Armstrong opens the scoring in the second match, after a tight first 15 minutes. The Stallions doubled down with another strong try to number 12 Jericho Yorke. A momentum shift near the end of the first half saw the Scorpions put their first points on the board. Scorpions and Canterbury Bulls rep Uriah Tuli scored first points for his team followed by a tries by teammate Jayton Lawrie and an excellent run away from Martino Bio. The Scorpions head into the second half with a lead over the Stallions 18 – 8.

The Scorpions came back into the second half firing with a try in the first few minutes to Leo Nasio. The Stallions still in it, put on a massive came back and hit the line hard with a try to Brooklyn Rowley to break a quiet period for the team. Armstrong follows up with a second try for the Stallions, to close the gap. This was followed by a crucial try by the Stallion’s Jason Kameta, to give his team the lead by two points with 14 minutes to go. Out of desperation, the Scorpions created their own opportunity scoring an impressive team try, Bio took the ball across the line to take the lead back for the south. With five minutes to go, the Stallions refused to bow out with a try to Tome Poona sealing the win for the Stallions 28 – 30.