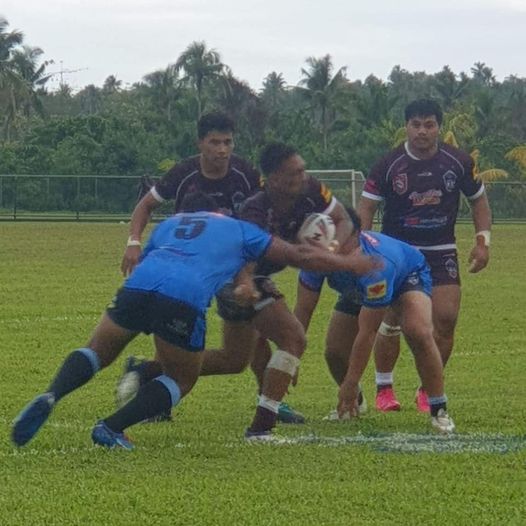 The Upolu Maroons have won the opening game of the 2021 Rugby League Samoa Island of Origin series, after they defeated the Savai’i Blues 32 – 26 at Prince Edwards Stadium in Lalomalava.

Defending Island of Origin champions, Upolu, held off a fast finishing Savai’i to give themselves a 1 – 0 lead in the series and will go into next week’s match in Satupaitea hopeful of wrapping up the series.

Kicking off the scoring for the match, Upolu halfback, Davy Tavita, took advantage of an early penalty to give the Maroons a 2 – 0 lead in the opening minute. Anthony Tauillo would cross for the Maroon’s first try just a minute later to give the side a six point advantage before Lie Unasa kicked a field goal in just the third minute of the game.

Savai’i hit back in the seventh minute of the game through forward, Fautua Faauila, with the converted try reducing the deficit to one. Savai’i hit the lead just five minutes later through hooker Ionata Tinga, before winger, Tulolo Tulolo scored for Upolu to set the score as 11 – 10 at the end of the first quarter.

Etuale Pitone would cross next for Savai’i to give them the lead for the last time in the match, before Upolu hit back with two tries and another field goal to give them a 22 – 14 lead at halftime.

Upolu extended their lead early in the second half through tries to Rico Alofipo and Galoone Fata in the 45th and 60th minutes respectively, before Raymond Salu scored a double to bring the deficit back to just six.

Unfortunately for the home team, time ran out for the side as they fell by six points in an exciting match of football.