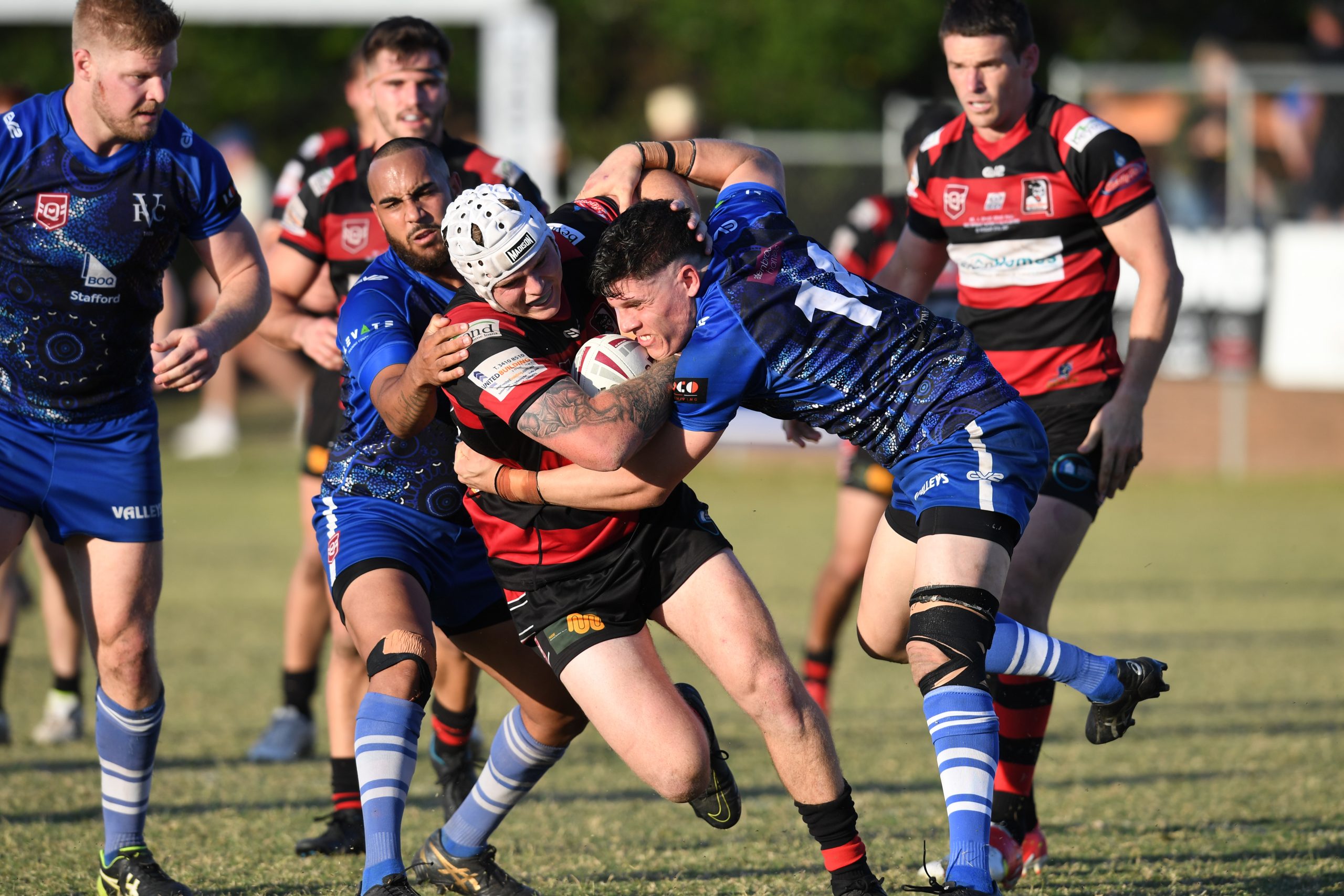 A 77th minute moment of magic has seen the Valleys Diehards clinch victory from the jaws of defeat in an epic Brisbane Premier A Grade grand final at BMD Kougari Oval on Saturday.

With just under three minutes remaining – trailing by four points, an all-or-nothing crash play from Jye Ballinger under the posts led to ultimate jubilation for the royal blue, as they broke the hearts of the West Brisbane Panthers to win the premiership in classic duel, 20-18.

Describing the two-point thriller as an arm wrestle after the match, Valleys co-coach Tye Ingebrigsten always thought it was going to be close contest.

“It was really nerve-wracking there. In the last three minutes, I think we stole it away from them but it was a really intense game of footy and I thought it would come down to the wire,” the premiership-winning coach said.

“They just rolled through our middle and we knew they had speed and wanted to generate match speed so we needed to tighten up as much as we could.

“I thought if we were to win the game, it was going to be one of those grinding games that would be really close… I didn’t think we could blow them out of the park.

“We just stuck with them, close enough and they ran out of legs and Jye Ballinger under the posts… how good was that?”

A game that had many storylines ahead of kick-off – including the fact the two long-time foes hadn’t met in the big dance in more than 84 years – the new chapter that was added between the arch rivals will be one that be bookmarked for years to come.

After a hard and fast start by both teams, a magical passage of play led to first points for West Brisbane in the 10th minute.

On the last tackle, Tommy Butterfield executed a well-placed grubber kick for Krys Freeman to re-gather, before kicking again along the turf to Jack Strasser, who scooped up the ball and scored under the posts.

A strip penalty in the 25th minute saw Kyle Van Klaveren add an extra two points in front of the posts to make it 8-0.

With three minutes left until the break, and after giving the Panthers line an absolute peppering with possession, the dam wall burst as Valleys slid in for their second try of the match.

A scrum play from centre field saw the ball shift to the left; Corbin Daniels drawing in a defender before offloading to Rashaun Denny on the left flank to cross and put the royal blue ahead 10-8 at the break.

An arm-wrestle ensued during the first 15 minutes of the second half with Valleys nudging just ahead with momentum, but after two knock-ons in the act of scoring tries, the Diehards came up with a crucial error that proved costly; Bryce Donovan running away with the loose pass before linking up with Brandon Downey to score and take back the lead, 12-10.

Bryce Donovan. Photo: Vanessa Hafner
Bryce Donovan. Photo: Vanessa Hafner
The Panthers were in again moments later when Fakahoko Teutau broke the line and ran 30 metres before offloading to the Norths-contracted Donovan who steamed away to dive over underneath the posts. Van Klaveren’s conversion setup a handy eight point lead with 20 minutes remaining.

In the following set, the Panthers knocked on early in the count and that’s when the Diehards got to work, spreading the ball from left to right before Sean Yorston and David Bond set Daniels up in the corner to cross and close the deficit to just four points.

With the entire BMD Kougari Oval on the edge of their seats during the final 15 minutes, it was the former Intrust Super Cup forward who came up with the miracle play on the verge of full-time; standing in front of the posts, 10 metres out, ready to receive a well-executed pass out of dummy-half from Miers to score what eventuated as the match-winner.

With a player of the match performance on the left flank, Rashaun Denny reflected on making amends to last season’s disappointment after falling short of making the grand final as minor premiers.

“It feels a lot better to go one step further [than last year],” the Norths Devils-contracted back said post-match.

“I had a really good year this year at Norths, I got my debut in Cup. I took the experience from there and added to this with the boys who have produced all year round.

“[The Valleys boys] went really well without a lot of us Norths boys this year so full credit to the boys on the performance.

“I’ve played a grand final before and that exact emotion came back today. I knew we’d get the job done. We have a lot of trust in our boys and I just can’t describe the feeling.”

And in the inaugural Brisbane Premier Under 20 decider, Wynnum Manly came from behind to defeat West Brisbane 25-18. The mud and bloods shocked the home side in the opening stanza, but with the Chookpen in full flight, the Seagulls flew home in the second half with player of the match Blake Moore adding a one-pointer in the dying stages to put the cherries on top for the Bayside.