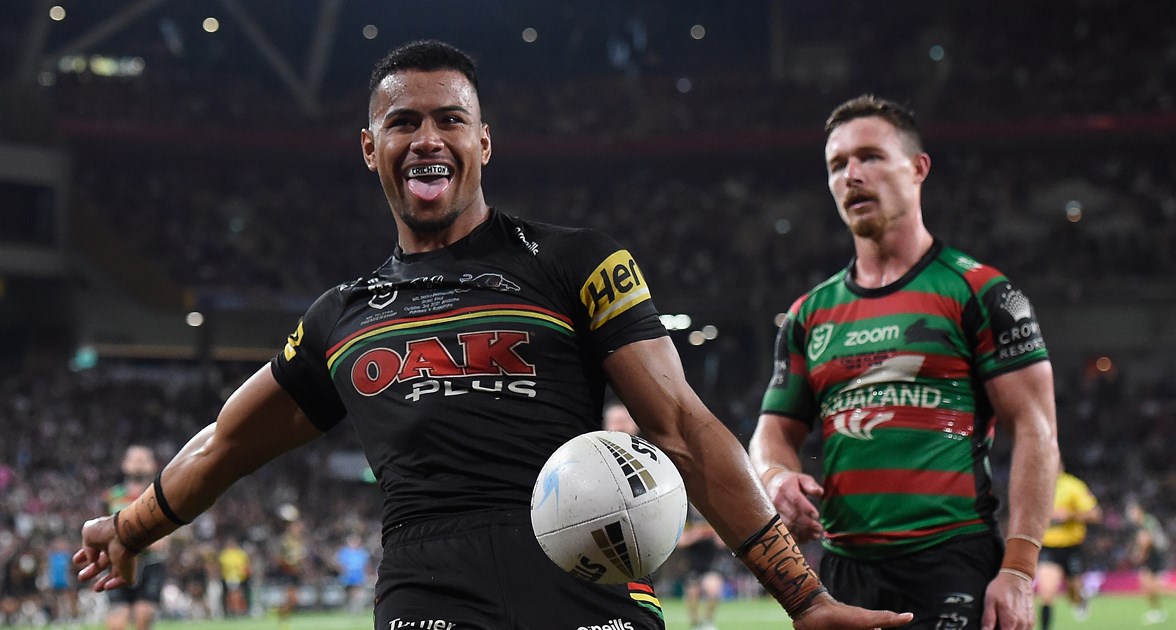 Once bitten, never shy. Penrith have prevailed in one of the great gruelling grand finals, a pivotal Stephen Crichton intercept proving the difference as South Sydney threatened to pinch the ultimate rear-guard premiership.

The Panthers’ 2020 grand final night misery at the hands of Melbourne morphed into a shoot-out, but their 14-12 triumph before 39,000 screaming Suncorp Stadium fans on Sunday night typified defence at its finest in a year where points have flown thick and fast.

Redfern favourite Adam Reynolds twice had the toughest of chances – off the tee and with a 40-metre-plus, two-point field goal attempt – to pen his own farewell fairytale.

Nathan Cleary’s own masterclass off the boot forced all five-drops a thrilling contest saw, kicking the Rabbitohs to the kerb and earned him the Clive Churchill medal.

But fittingly, Crichton’s all or nothing play without the ball proved pivotal.

At 8-8 and having been that way for most all of the second half, Rabbitohs talisman Cody Walker swung left with a long ball in the 66th minute.

Had it hit its mark, Alex Johnston would’ve been on his way.

Instead it was Crichton streaking in the opposite direction, pinching the Steeden on damn near the same blade of grass that Matty Bowen burned Brett Kimmorley in the 2005 State of Origin opener.

“I got hammered from the defensive coach (Cameron Ciraldo) all week,” Crichton said on Nine.

“Having Walker there he is one of the best in the league and eyes for the footy and space to put their players in. We did video on that during the week and I was there at the right time.”

Equally so, he then backed it up with the lead hand when the Rabbitohs next marched downfield, Johnston over in the left-hand corner.

Reynolds’ strike from right on the sideline sailed oh so close, yet oh so far, 14-12 it stayed to the end.

For coach Ivan Cleary, tears couldn’t be contained after his third grand final visit finally yielded the title he has so craved.

Before kick-off cameras caught his son Nathan looking to the heavens.

Whether asking for divine protection of a busted shoulder, or charting the aerial assault that caused Souths so much grief, it mattered nought.

Both elements of the young half’s narrative proved decisive.

Somehow the Rabbitohs stayed in it, Wayne Bennett’s final red-and-green gift so nearly being one of the finest defensive wins seen in a decider.

A heavy head knock for Dane Gagai saw Benji Marshall in his current incarnation – the everywhere man – lining up at left-centre and a potential target.

But it was on the other edge where Campbell Graham has proven one of the game’s most robust defenders that the Rabbitohs erred, Jarome Luai punishing Graham’s ill-advised inward rush by piloting Matt Burton through the gap he left.

Where the Rabbitohs were split out wide, Walker found fortune through the middle, leaving Cleary and Kurt Capewell for dead in a 35-metre jaunt to the line.

That right shoulder of Cleary’s looked in desperate need of the surgeon’s knife when Walker brushed past him for 6-all.

As Gagai passed his HIA and Jai Arrow also trudged off for a free interchange – abusing the cited Viliame Kikau on his way after he was clipped high – both forward packs began to flag after 30 minutes at a furious pace.

Arrow’s penalty for crowding the ruck as soon as he got back on the paddock offered respite for the Panthers and an 8-6 lead from Cleary’s boot.

With just 40 per cent of possession Souths sorely needed the break, playing above and beyond to keep Penrith’s lead to just two.

Where Bennett used each of his four benchmen within 20 minutes, Cleary enjoyed the luxury of keeping Tyrone May and Spencer Leniu on ice.

Arrow later being ruled out of the contest due to delayed concussion symptoms only played further havoc for Souths, who at the same time levelled up proceedings through a Reynolds penalty goal.

A show, go, and just too slow offload from Cleary had Kikau over the line, only for the halfback’s pass in traffic to be called back as forward.

As the clock ticked down, Cleary continued to force drop-outs and the Rabbitohs kept knocking back the resulting raids.

For a team so blessed with attacking brilliance, a return to Bennett’s prevailing coaching hallmark was fitting.

So too the grandest of grandstand finishes – with a defensive play and a couple of champion kicking boots proving the difference.