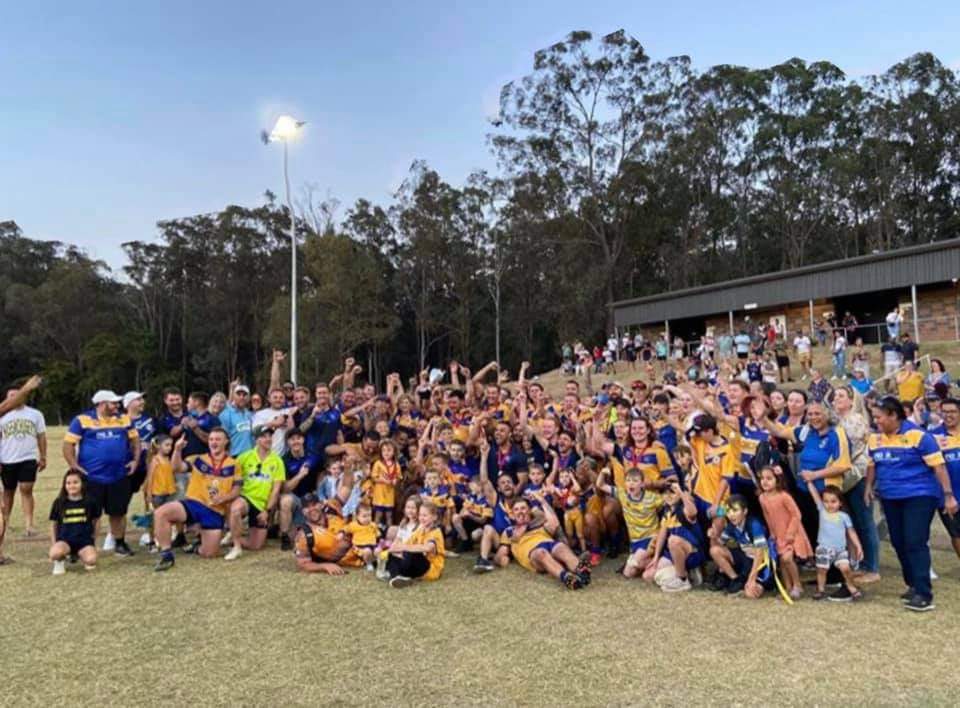 It was the showdown that everybody was looking forward to and it certainly delivered.

After what was a stellar year, the Dayboro Cowboys lassoed the Souths Inala Warriors 22-12 in the Intech Open 1 Men’s grand final played at Rochedale’s Ian Clarkson Field on Saturday.

Having lost their inspirational captain / coach Kane Zalewski early in the match, Dayboro weathered the Warriors’ huge forward pack to claw their way back into the game, snatching victory from the minor premiers on a sweltering Brisbane spring afternoon.

With a huge supporters presence on the hill, Dayboro were first to get points for the afternoon in the sixth minute, with Zalewski slotting a penalty conversion from in front of the sticks to get the Cowboys on the board.

However; the first half belonged to Inala and their monstrous forward pack laid the platform for their first points when they scored out-wide, having made the Cowboys defend for three consecutive sets of six on their line.

Jake Hennaway slotted the sideline conversion to see the minor premiers shoot out to a 6-2 lead in front of a massive parochial crowd.

It was another Souths colossus to score the Warriors next try, with prop Kiliona Alaivaa smashing his way through the Cowboys defence to increase the lead to 12-2.

However, the challengers were giving as good as they got and started to cause some headaches for the Warriors through hooker Braydon Warr, who was making some easy meters out of dummy half.

It took a superb pass to find second rower Cody Heathwood to score Dayboro’s next try.

The tireless back rower was well-deserving of a four-pointer to see the Cowboys back in the game.

The Warriors had another chance to go in just before the break, however the Cowboys held on to see the Warriors go in at the break in front 12-6.

But like every other season, the Cowboys have an uncanny knack of finding that extra petrol in the tank when faced with adversity.

Having endured a grinding first half, the Cowboys were slowly tiring the Warriors big men out and it delivered a tonic for the northside outfit when they scored in the corner and converted to lock the scores up at 12-12.

A lazy head high gifted the Cowboys another easy two points and it was easily slotted by Tyler Isdale to see the Cowboys back in front 14-12.

Whilst the Warriors were making some fundamental errors in the second half, Dayboro seized the moment and in the 57th minute, Aiden Sullivan was rewarded for his gutsy effort with a try under the sticks.

Although they were lagging on the scoreboard, the Warriors kept coming at the Cowboys in what had already been a torrid game thus far and had a chance to score in the corner, but they dropped the ball over the line.

However, it was the Cowboys’ day and a late penalty goal by workhorse second rower Isdale from the sideline, capped off what was a monumental comeback to round off what was an incredible game of rugby league.

Around the grounds in the other grand finals, Brothers defeated Banyo 30-4 in the Division 2 Northside competition; whilst across the river, it was an epic battle between Browns Plains and Beenleigh with the Bears getting the spoils 23-20.

In the Division 3 competition, Moreton Bay overpowered Norths St Joseph’s 32-12 to win the Northside premiership and Easts Mount Gravatt were too strong for Mustangs 32-18 in the south.