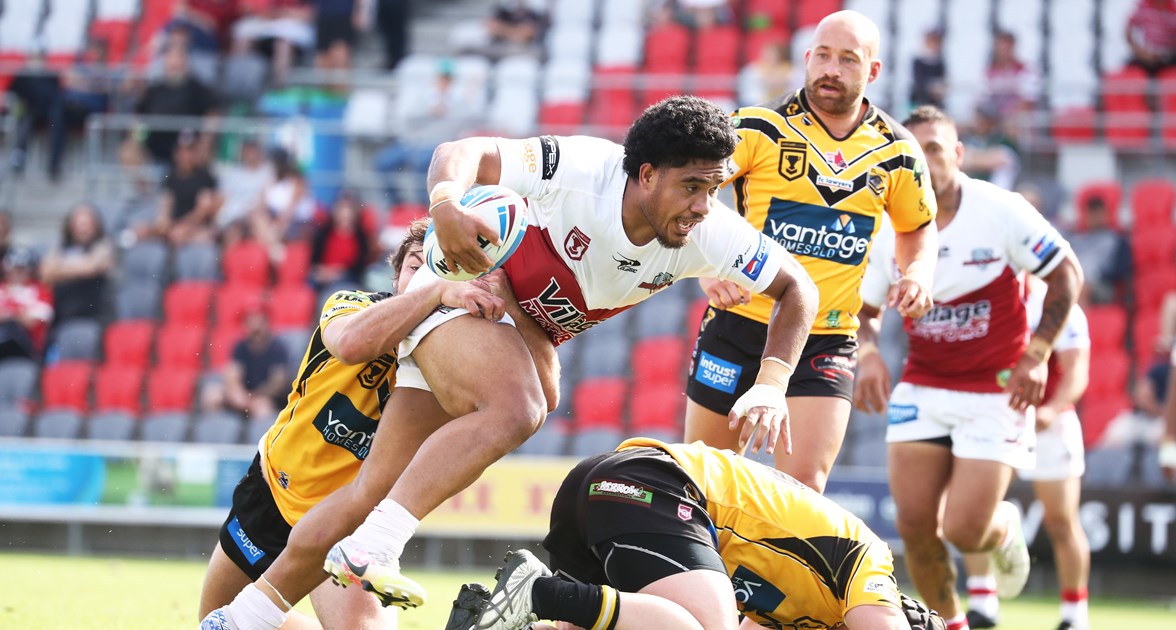 On the back of the broad shoulders of front rower Lachlan Timm, the Redcliffe Dolphins ran out winners 40-20 winners over the Sunshine Coast Falcons at Moreton Daily Stadium.

Timm was outstanding for the Dolphins in the middle of the field – including one memorable 40-metre charge which left the Falcons defence in tatters and led to a try to Dolphins winger Edward Kosi.

The Dolphins started the match impressively with tries to the returning Trai Fuller in the third minute and William Partridge in the sixth minute.

The Fuller try came from clever lead-up work by Jayden Nikorima when he decided to run the ball on the last play and found Kosi who placed a well-timed kick infield to the flying Fuller, who crossed for the try.

In the middle section of the first half you could sense a changing in momentum towards the Falcons with quick runs from dummy half continually putting the Dolphins on the back foot.

The visitors changed the momentum into points when Paul Ulberg crossed in the 20th minute and Louis Geraghty crossed just before the break.

The Geraghty try can go down to a man who has been a nemesis to the Dolphins over a lot of seasons in Falcons skipper Todd Murphy.

Murphy capitalised on some poor Dolphins discipline late in the first half, when he took the ball to the line and found a charging Geraghty, who crossed to take the score to 14-8 in favour of the Dolphins at the break.

The second half started off as physical as the first half, but it was the Dolphins who had the better of the second stanza crossing for four second half tries.

The Falcons, to their credit, kept fighting and crossed for two consolation tries; one to Luke Polselli and one to William Toloi.

Dolphins coach Adam Mogg said after the game he was happy with the result but knew his side could do better and would have to be if they wanted to continue on in the competition.

And what a fitting way for one of the greats of Cup Todd Murphy go out, kicking a conversion to take his career tally to 998 points.

Whether it was as a Dolphin, Sea Eagle, Tiger, Devil or a Falcon, Murphy can hold his head high with his enormous contributions to each club he has been a part of and to this great competition.