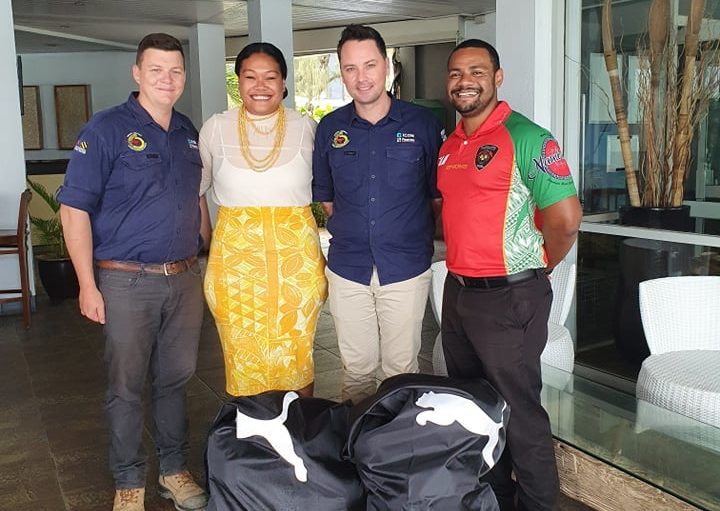 Icon Reeves have partnered with the Vanuatu Rugby League (VRL) to become the naming rights sponsor of the Icon Reeves Port Vila and Luganville Rugby League 9’s tournaments for 2021 and 2022. The 500,000 Vatu sponsorship will also deliver over 50 rugby league balls to the VRL, to further develop the sport.

Icon Reeves is a partnership between two long standing construction companies in Australia. Icon is one of Australia and New Zealand’s largest construction providers with over 80 projects ranging in size from $0.5 million to $400 million. Reeves Envico is an internationally focused construction company, that works closely with all levels of government, contractors and communities in the design and delivery of construction works, capacity development and the management of remote service procurement. Icon Reeves is delivering the redevelopments of Cook Barracks on Efate and Tiroas Barracks in Santo.

“Icon Reeves are thrilled about the partnership established with the VRL. We are focused on helping the VRL advance rugby league in Vanuatu and look forward to seeing the development in the junior and women’s competitions that this partnership will help foster”.

While Covid-19 has impacted on the VRL’s ability to play international matches in the last few years, that hasn’t stopped the growth and development of the game domestically. Through the Port Vila Rugby League (PVRL), the men’s competition has grown to seven teams in 13’s, while they’ve established both women’s and U/15’s competitions with four sides in each.

VRL Secretary General So’oletaua Motuliki commented “All the growth in our sport has come through our 9’s tournaments which we started running in 2018. Whether it be men’s and especially in the women’s and U/15’s, we’ll often see teams first take part in a 9’s tournament which requires less players and less commitment with one- or two-day tournaments before graduating to our 13’s season in subsequent years. We’ll often see higher numbers and new teams in our 9’s tournaments and currently for Port Vila, we are looking to have nine teams for the senior men’s, six teams for the women’s, five teams for the U/15’s and also looking to add U/18’s for our upcoming tournament. For Santo, Luganville will host its first ever 9’s tournament ever, kick starting with four confirmed teams and potentially another two more.”

“This valued VUV 500,000 investment from Icon Reeves will allow us to continue to invest in these showpiece tournaments and continue to grow the game at the grassroots in Vanuatu. This will allow more opportunities, particularly for women and children, to take part in and benefit from the sport. The VRL would sincerely like to thank Icon Reeves for this partnership, which we hope to extend long into the future,” added Mrs. Motuliki.

The International Rugby League (IRL) held its first 9’s World Cup in 2019, with the next tournament to take place in 2023. There is also a push from the IRL for Rugby League 9’s to be part of the 2032 Olympic Games in Brisbane and other international events, including the Commonwealth Games.