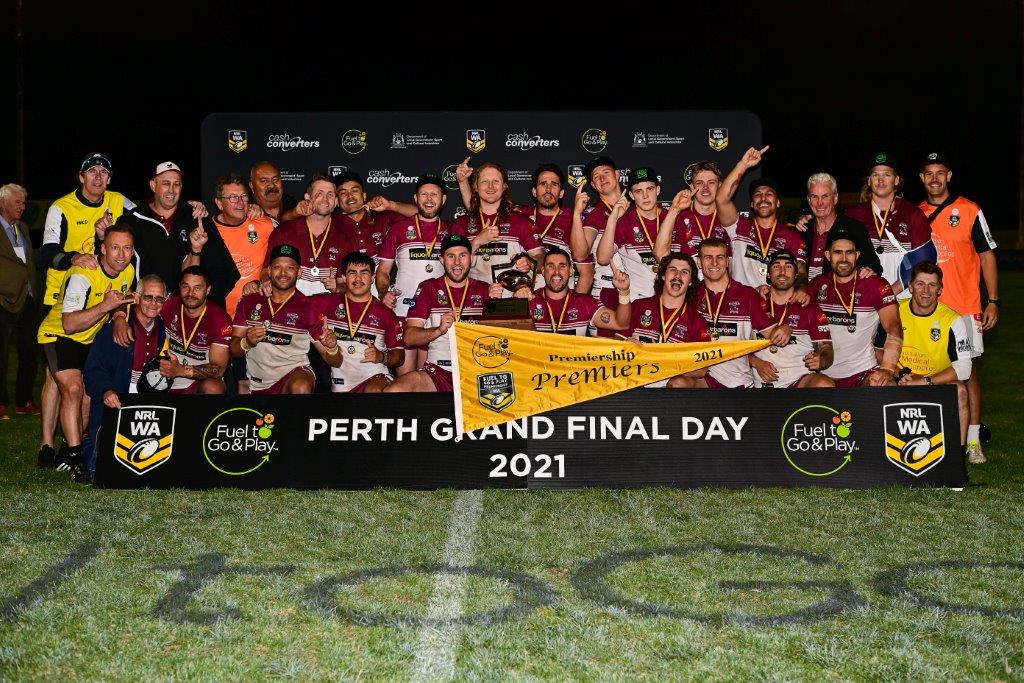 So it happened again. It seems that 80 minutes just isn’t long enough for our Grand Finals here in Western Australia. In another game for the ages, it took 95 minutes to seperate the old rivals, with a penalty goal from 38 metres out proving the difference as the North Beach Sea Eagles outlasted the South Perth Lions to win 26-24. The veteran Kani Solmon making no mistakes with the conversion, sending it duly between the sticks.

It was a brutal start to the match, with both teams aiming up, the Lions linespeed giving all sorts of problems to the Sea Eagles kicking game. Eventually it told as the Sea Eagles ill-discipline gave South Perth the first real chance of the game, and the Lions made no mistake, with a beautiful last tackle option from “Iceman” Harry Debique giving a late inside ball to Eddie Proudler to open up the scoring. With Jordan Jacobs scything run a tackle earlier leaving multiple defenders on the ground, the Sea Eagles were short and the Lions duly converted.

The very next set, was pristine footy, with a last tackle kick from Proudler putting Tye Saus right on his own line, and the Lions defenders duly hammered him into his own in goal. And with the Lions dominating possession and field position, form centre Tyler Thomas dotted down next to the sticks to extend the Lions lead. A late inside ball from Proudler, put Thomas one on one with some forwards and he had too much speed and at 12 points to nil, it looked like the Lions might run away with the contest. The Sea Eagles had to be the next to score.

Enter the veterans. With Beach getting their first real shot at the Lions line, they got to 5th tackle, and put the ball in the hands of Cairo Takarangi. Sizing up the situation, he sent a spiraling 20 metre pass into the hands of Kani Solomon, who sized up opposition centre Thomas with one of the best in and away’s you’ll see in the game, to bring Beach into the contest. With Justin Buckley knocking over the conversion, it was 12-6 to the Lions and we had a game on our hands.

But, the pendulum swung again, and with the Lions controlling field position, the Sea Eagles were undisciplined again, and invited the Lions to a set on their line, to which they duly obliged, with Thomas scoring again. A late offload from Nick Holliday, put Thomas one on one with young Sea Eagles fullback Bailey Millar on the try line, and it was a battle he was never going to lose, scoring his second and putting the Lions further in front, restoring their 12 point advantage.

Now if you were there on Grand Final day you will be admitting two things. The first is that class doesn’t go away with age. And the second is that Jason Godecke is a classy player. In the last set of the first half, an offload near halfway finds the ball to young Millar, who at 17 doesn’t know what failure is yet, and he duly wants to play footy. He finds Greg Lingard, who engages two defenders and sees someone looming up in support smelling an opportunity. Its Godecke, who will be 36 this year, and has just finished winning the game for North Beach in Reserve Grade, who looms up with his trademark twenty metre dash to slice straight through and find Millar. You could forgive for believing Bailey is Jason’s 20 years younger clone, who uses his pace to touchdown right under the sticks right on the stroke on half time. And at 18-12 the Sea Eagles with all the momentum heading into half time, the game was still well in the balance.

When the sides returned from the break, you could feel the anticipation with the Sea Eagles starting the half the better. Looking more enthusiastic then they had through all the first half, they had all the early running, and got the first real chance to attack the line. On 4th tackle Harry Wecker, who gets through some real work, takes a routine hit up in the middle of the field, but both defenders go low, so allows young Kobi Aiesi to jump out of dummy half and find Bowman Stein with momentum and he goes straight and hard and finds enough to power to squeeze the ball over the line.

At 18-18 it becomes a real battle, but one still gets the sense that the Beach boys are fancying themselves, with the crowd’s calls of “Beach, Beach, Beach, Beach, Beach” echoing through the ground. And after a good kick from Takarangi at the 23 minute mark, North Beach get a crucial call go their way and get a full set on the Lions line, and again they make them pay, with Solomon showing amazing strength to push through the tackles of Thomas and Tere Cameron-Ramea to put the Sea Eagles in front for the first time. Nailing the conversion from the right touchline its 24-18 and seems like it might be a case of bridge too far for the Lions.

But you can never count the red and whites out of it. And with no time on the clock, the Lions start to throw the kitchen sink at the boys from the North. On last tackle 20 metres out, Proudler receives the ball again and finds his halves partner Holiday. Holiday who unfairly or not, has copped some criticism this year, throws an absolute pearl of a ball, that hits Billy Judge on the chest. And he makes no mistake, going over the top of the fullback and cover defence to give Debique a chance to level it up.

This is the stuff you think about as an 8 year old watching footy games. 24-22. Kick from the sideline. Crowd going crazy right behind you. Whether they are cheering you on or willing you to miss. Harry Debique, in his last game of first grade in Western Australia before moving home to his native New Zealand, sizes up the kick. Its 20 metres out. On the naturally bad side for a right footed kicker. With the wind slightly against him, its a huge moment. One step back to settle himself, he duly moves into his 4 step kicking motion….. and NAILS IT. The ball falls just over the crossbar to send everyone into histerics! The “Iceman” barely reacts, as he runs back to face the kick off, with a small momentary smile on his face, that forces overtime and another classic.

In extra time, Kani Solomon makes a linebreak, which puts North Beach in a prime position, and after a couple tackles you’d have thought Beach would setup for an easy field goal. On 4th tackle however, Buckley inexplicably goes down the blindside to open the field back up, and the Sea Eagles, end up with a shocking attempt at field goal from Millar, that ends up an offside penalty to the Lions. Some long range attempts from the Lions ended in some 20 metre restarts for the Beach, and again they went down the other end and this time it was Stein who had a turn. And off the boot it looked a beauty. But it shaved the right post and was duly waved away. A couple more poor attempts ended the extra time period after 10 mins, and we strap in for another period.

A poor penalty to open the second period, for holding onto the ball, allowed the sea eagles to get great field position. But again on 4th tackle, this time Aiesi goes down the blindside, and the Sea Eagles are then forced to run the ball on 5th tackle, in what is a poor set in good position. And the Lions get on a roll. Three tackles in a row they go down the field, picking up easy metres. But unfortunately Thomas drops it as they move into good position and the next set after a couple of good runs, Greg Lingard gets stripped in a 3 on 1 tackle and referee Scott Spittles rightly awards the penalty 38 metres out, almost directly in front.

And its left to Kani Solomon, who duly cramps up in the middle of the field as the pressure starts to tell. As he lines it up, you can hear the crowd going crazy. The same thing goes through kickers minds. “Its just like any other kick. You’ve kicked 100 of these at training. Make sure you plant that left foot close to the ball. Measure the run up. Eyes on the posts. Breathe. Breathe. Geez Kani just Breathe! And eyes on the ball as you step forward”. And Solomon duly delivered, piloting the ball through the sticks to deliver the proud Sea Eagles another Premiership. With Bowman Stein winning the Ron Hudson Medal for best on ground, and playing 95 minutes with a badly broken finger, he was a deserving winner.

An epic final and an amazing end to another big year in the NRL WA Fuel To Go & Play Premiership.