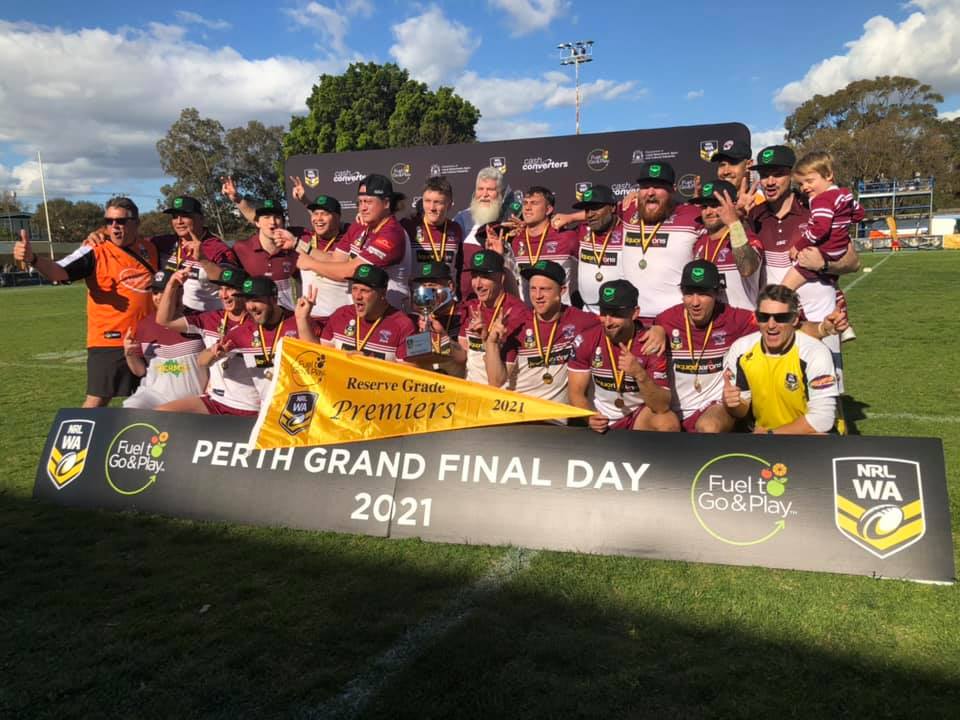 Sea Eagles have gone back to back in the Fuel To Go & Play Reserve Grade competition, after a ” – ” last ditch victory over a brave and gallant South Perth Lions. Jason Godecke, who also starred in the First Grade game late on in the day as a last minute reserve, was the saviour with a try at the death to steal the game for the Sea Eagles.

Reserve Grade Player of the Year, Mitchell Wade, put the Sea Eagles on the board first with a nice finish of a left to right backline sweep. When Godecke almost cut them to shreds in the middle of the field, it was a matter of catch pass for the backs, who put Wade on the outside of his opposite number. And he was too strong from that far out for the Sea Eagles. In a kicking change, Beau Constable stepped up for the conversion, and hit the cross bar to leave the score at 4-0 to the Sea Eagles.

The lead didn’t last long however, with North Beach duly dropping it off the kickoff and giving the Lions a golden opportunity. It was an opportunity they wouldn’t miss. With a couple of Premiership players combining, hooker Luke-David Wells-Talamavaio used a great piece of deception to send both markers the same way and give poor Dustin Hume the unenviable task of stopping a rampaging Patrick Lilii from 3 metres out. Luke-David duly added the extras and it was game on.

Unfortunately for poor Patrick Lilii, that would be the last he took part in the game, after a high shot left him asleep and then dazed as he was escorted from the field. The Sea Eagles can consider themselves extremely unlucky to not be a player down for 10 minutes or even the whole game after that particular tackle. It seemed however to really spring the Lions to life, and after a spilled bomb, only a desperate steal from Kyani Byron stopped a determined Cameron Jermy from dotting down. And when the Sea Eagles looked like returning serve in a similar situation soon after, Toby Sullivan in a great cover tackle, cleaned up Byron on the 5th tackle to deny the Sea Eagles.

And soon enough the Lions went further in front. After some nice interchange of passing, Tyson Lewis slotted in at second reciever to send a beautiful ball onto the chest of Te Whariki-a-rangi Hulena, who ran a beautiful unders line to cut between two defenders and score, and Luke-David made no mistakes with the conversion. At 12-4 a boilover might have been on the cards, and Beach would need to be next to score.

The Beach supporters didn’t have to wait for long. After a good run from Sam Lofts and a quick play the ball, Byron found Constable on his inside, and he split the defence, running 50 metres and making the fullback look like he was standing still as he duly dotted down to bring the Sea Eagles back within 2 after Mitchell Wade kicked the conversion. With both sides going back and forth at each other, a bit of feeling came into the game, and thats where the score remained at halftime.

After the break, it was all Lions. They were running harder, and had more possession of the ball. And were duly rewarded after Peliata Fisiihoi beat three defenders from close range and scooted over to put the Lions eight points in front. And when Constable put the the ball dead on the full off the kick off, the Beach supporters were pulling their hair out.

But the Sea Eagles were far from done. With Benjamin Keenan putting his hand up and breaking tackles for fun, the injection of big men Elliot Glendenning and Nathan Roa brought the Sea Eagles to life on the back of some hard running. Jay Roa, who was given player of the grand final, fed off his brother’s energy and started causing all sorts of problems, off loading at will, and when Godecke and the mercurial Deba Cook put Wade in for his second try of the day, the game was well and truely on. Wade hit the conversion poorly however, and at 18-14, Beach had 14 minutes to come up with something big on Grand Final day.

Cometh the hour, cometh the man. Jason Godecke, captain of this unbeaten side, shows his class. recieving the ball 45 meters out at first receiver, he dummies on his outside, beats the first defender with footwork, and shows absolute pace to beat the cover defence and fullback on his way to the try to put beach in front. A north beach legend, his efforts on this day will go down in folklore for the storied 70 year old club. Wade makes no mistake with the conversion, and with seven minutes remaining on the clock, the Sea Eagles finally find themselves in front again 20-18.

Now you’d think that North Beach would do a nice simple set and kick long here to consolidate their position. I can almost guarantee the message from coach Phil Douche would have been something along those lines. But rugby league players have never been accused of being the smartest tools in the shed, and when Constable took the Lions defence on down a five metre blindside, you could see Douche’s hairs turning grey. Getting bundled into touch, the Lions find themselves in the right position with plenty of time on the clock.

And then again the Lions returned the favour. Down by two with not much time left and 20 metres out from the line, the Lions attempt…. a field goal? A breakdown in comms must have been the cause as, the kick was charged down in any case, and the Sea Eagles had the ball back in possession. And it was the last big chance the Lions would get, as a last chance kick sailed into the hands of Wade and the siren went in the background to crown the Sea Eagles Reserve Grade side, back to back champions.