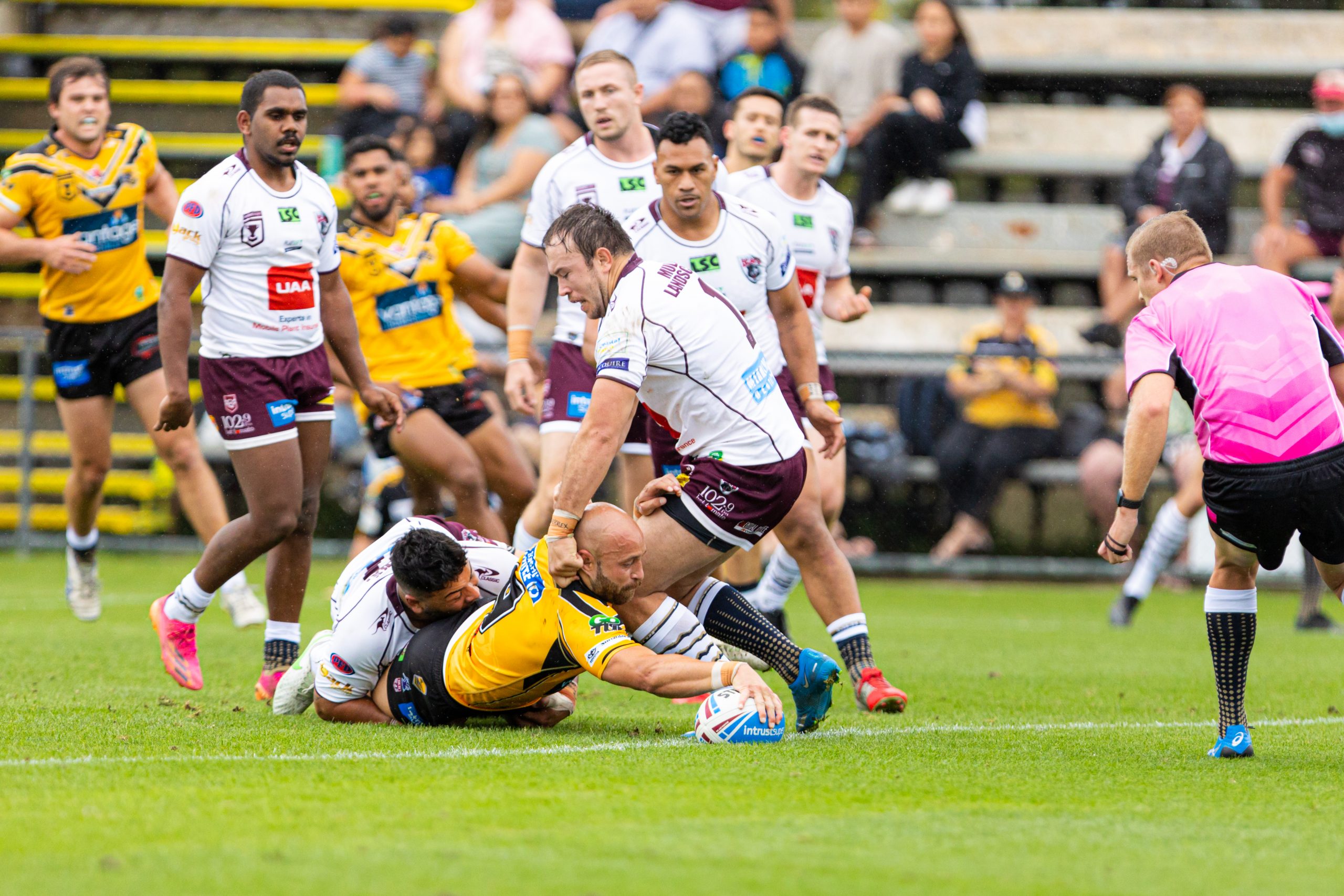 In stark contrast to last week’s disappointing loss to the Wynnum Manly Seagulls where the Falcons struggled to dominate, the Sunshine Coast team were in control from the opening whistle.

First half points were aplenty, with the first try of the game going to a flying Paul Ulberg who pounced on a superbly placed grubber from Todd Murphy.

Murphy got busy and started imposing himself on the Burleigh defence with the Falcons second try coming when front rower Daniel Dole attracted all of the opposition’s attention close to the line and popped a stunning short ball to Murphy who spotted some space and slid through a yawning gap to score under the black dot untouched.

Burleigh showed some resistance in the first half and were able to find their way to the line through their veteran centre Sami Sauiluma.

The celebrations for the travelling Burleigh fans were short-lived after the Falcons responded with back-to-back four pointers, the first of which scored by their experienced rake Kurt Baptiste.

The Falcons fourth and final try of the first half was scored by fullback Luke Polselli, who incredibly, has kept his impressive scoring record intact.

After today’s match, Polselli has scored at least one try in all 10 of his Intrust Super Cup games since making his debut for the Cutters in Round 1, 2020.

The Falcons went into the sheds at half-time with a 22-4 lead, but the second half was a much better showing from the visiting Burleigh squad and they started the second period with a clear intent to come out and try and disrupt the Falcon’s middle third, in both attack and defence.

After the middle forwards had been peppered with attempt after attempt, Burleigh looked to shift the ball wide where, eventually, the Falcons found themselves short, and Kurtis Rowe crossed in the corner to get Burleigh within 12.

As the final quarter of the game edged close, fatigue played a factor and the error and penalty counts started to creep up for both teams, pulling the game into a lull where not many set were completed, and not much footy played.

And seemingly out of nowhere, against the run of play, Nat McGavin pounced on a Burleigh dropped ball about 30 metres out, showing his signature speed to beat his opposing man to the corner, and stamping his name on the scoresheet.

In a defeated team, Burleigh’s fearless leader, Luke Page, was strong and was often putting his hand up to take the toughest of runs, doing what he could to push his team upfield against a staunch Falcons defence. Finally, he was rewarded with a four-pointer of his own, closing out the scoring in the 61st minute with a crash play close to the posts.

But it was the Falcons kicking to space and closing out the game, a pleasing sight after a season of frustrating finishes for coach Sam Mawhinney.

While the Falcons will be undoubtedly pleased to get a win in front of their home fans, their finals hopes rest on other results, particularly the fortunes of the Northern Pride. Simply put, thanks to ladder positions and points differentials, if the Pride win against Burleigh on Saturday, it’s season over for the Falcons.