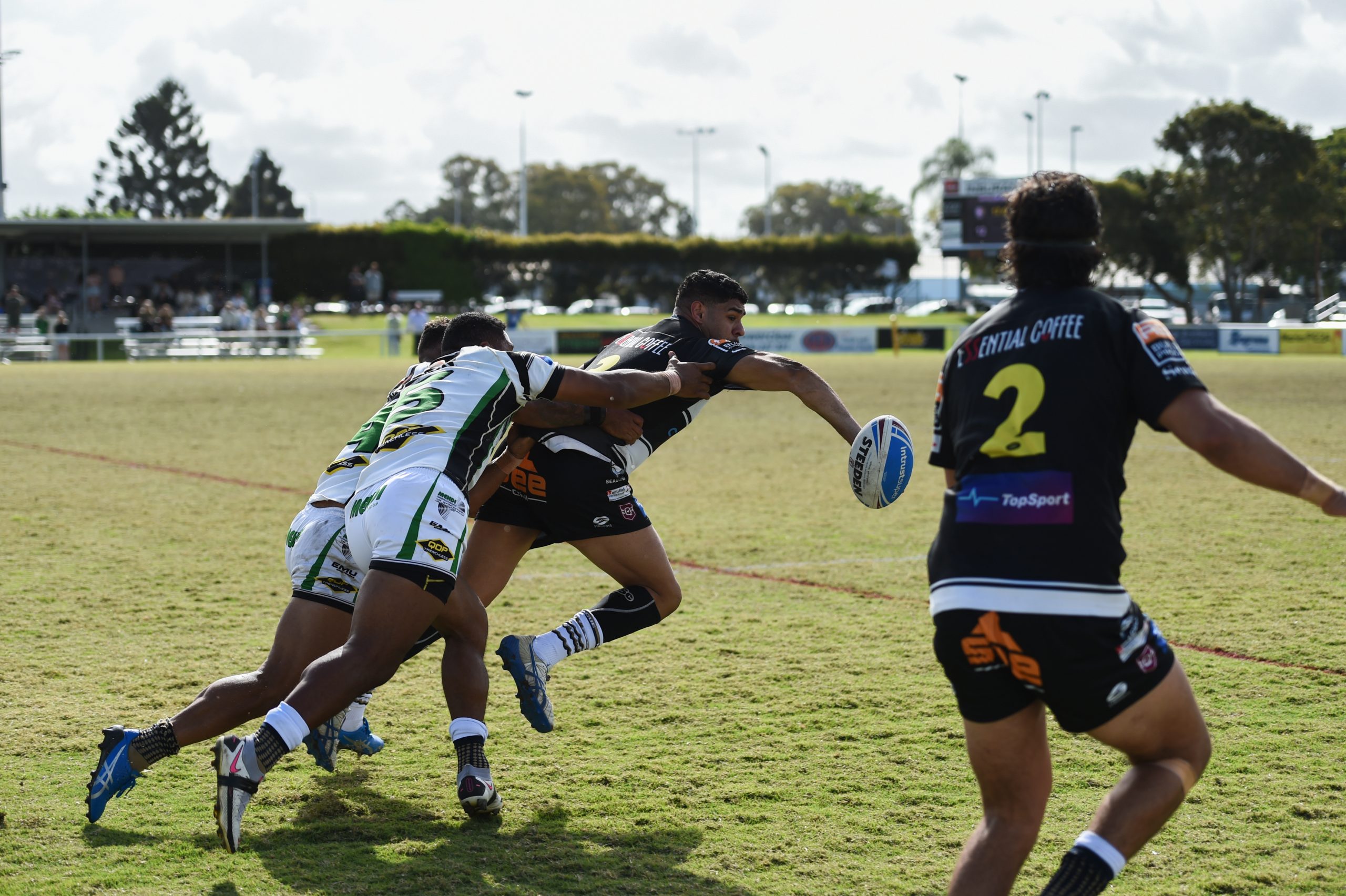 Tweed and Townsville fight it out for a draw

Tweed Seagulls have survived a breathtaking and controversial last-minute play to draw with Townsville Blackhawks 26-26 at Pizzey Park.

A desperate try-saving tackle by Treymain Spry, and a decision by touch judge Daniel Schwass that ruled Townsville’s ageless winger Kalifa Faifai-Loa did not score, saw the Seagulls finish with their second draw of the season after leading 22-6 just before half-time.

An call in the dying minutes of the first half also proved crucial in deciding the game. Seagulls hooker Liam Hampson crossed from dummy half near the posts, but referee Ben Watts indicated a double movement. The Blackhawks scored 30 seconds later right on the break.

Both calls evened out in the washup and some crucial unforced errors dearly costs the Seagulls, who scored five tries to three in an entertaining high quality match between two sides good enough to challenge for a grand final place, as did the loss of goalkicking halfback Luke Jurd with injury after 24 minutes.

In their last possession of the game after Seagulls five-eighth Will Brimson had narrowly missed a field goal attempt, Blackhawks halfback Shane Nona – outstanding throughout the game – put fullback Jaelen Feeney through a gap in the middle or the ruck and he found Faifai-Loa on the left touchline with 45 seconds remaining.­

Spry threw himself at Faifai-Loa as he dived inside the left corner post but the touch judge ruling was the ball touched the white stripe in a matter of millimetres. While Faifai-Loa threw up his arms in despair, the Seagulls survived with one competition point.

It was a tale of two halves and Tweed made some crucial unforced errors with the ball, particularly in the second half, with right winger Brayden McGrady ruined a certain try by kicking ahead instead of passing to unmarked fullback John Macklin.

And at 22-18 ahead, the Seagulls also elected to run the ball after receiving a penalty in front instead of taking the easy two points and moving a converted try ahead. Hooker Hampson overplayed his hand on the second play, throwing a ball to the right that fell into the hands of Townsville’s Corey Jensen.

“I thought it was a brave effort after losing Jurdy and Brent having to play 80 minutes, most at halfback, and some forwards also having to put in long stints,” Tweed coach Ben Woolf said.

“In the end some self-enforced errors at crucial times cost us and the Blackhawks had all the momentum for most of the second half and we couldn’t arrest that and counter attack.

“The call on Liam Hampson’s try just before half-time proved crucial. It would have been 28-6 instead of 22-12 which could have made a big difference.”

The Seagulls were dominant in the second part of the first half and went 16 points ahead, but two converted tries either side of half-time put the Blackhawks back into the match and they had far more momentum and possession than their opponents for much of the second half.

Townsville centre Josh Hoffman, who brilliantly slipped between defenders to gain possession from a Nona grubber kick to the in-goal, opened the scoring in the ninth minute. Nona converted to make it 6-0.

A converted Brent Woolf try from dummy half levelled the scores for the Seagulls before Jurd put Tweed in front when he followed up his own last-tackle bomb from 20 metres. McGrady leapt above Faifai-Loa and threw a pass over his head to Juwan Compain who found Jurd backing up. Jurd converted for 12-6 however, in a major turning point and quite bizarre moment, he injured his hip flexor while converting the try and could not play on.

Woolf went to halfback and made a good first of the switch with Hampson coming into the game at hooker.

In the resulting set from the kick-off, McGrady was the villain this time. Put into the clear around halfway from a good one-handed Spry offload, McGrady had fullback Macklin unmarked inside but inexplicable elected to chip over the top and knocked on trying to regather under pressure from Feeney.

Lee Turner pounced on a left-footed Brimson kick that took a deflection and made the try-line with McGrady landing the conversion from wide on the left, making the score 18-6.

Seven minutes before the break, the combination of Spry and McGrady came up trumps again – this time McGrady, after snatching a looping long pass to the right from Woolf, brilliantly slipped a pass over the top of two defenders to Spry who broke Hoffman’s tackle and scored. McGrady’s conversion hit the upright, leaving the score at 22-6.

Feeney scored a confidence-boosting try for Townsville seconds before the half-time siren sounded when he slipped between defenders Turner and Ryland Jacobs from 30-metres. Nona converted from the touchline to send his side into the sheds 10 points behind.

Townsville made it back-to-back tries and were well in the match when Riley Price scored three minutes after the break after they received repeat sets after Brimson lost the ball in the play-the-ball and Jacobs was trapped in-goal after collecting a grubber kick from Nona. Nona followed up by putting Price over from a ‘double-pump’ pass on the left edge. His conversion made it 22-18.

The powerful Spry steadied the ship for Tweed when he beat Bacho Salam one on one for a good individual try in the 54th minute, from a ‘free’ set of possession which came from Michael Bell dropping the ball cold for the Blackhawks, giving Tweed an eight-point lead at 26-18.

Salam had his revenge soon after when he crossed from an inside pass from Faifai-Loa who had been put into the clear from a sharp left-hand shift. Nona made it four from four with the conversion to make it a two-point game with 16 minutes remaining.

A Nona penalty goal levelled the scores at 26-26 and Nona and Brimson missed field goal attempts in the last four minutes before the dramatic final Blackhawks’ flurry that ended in Faifai-Loa being denied a winning try.