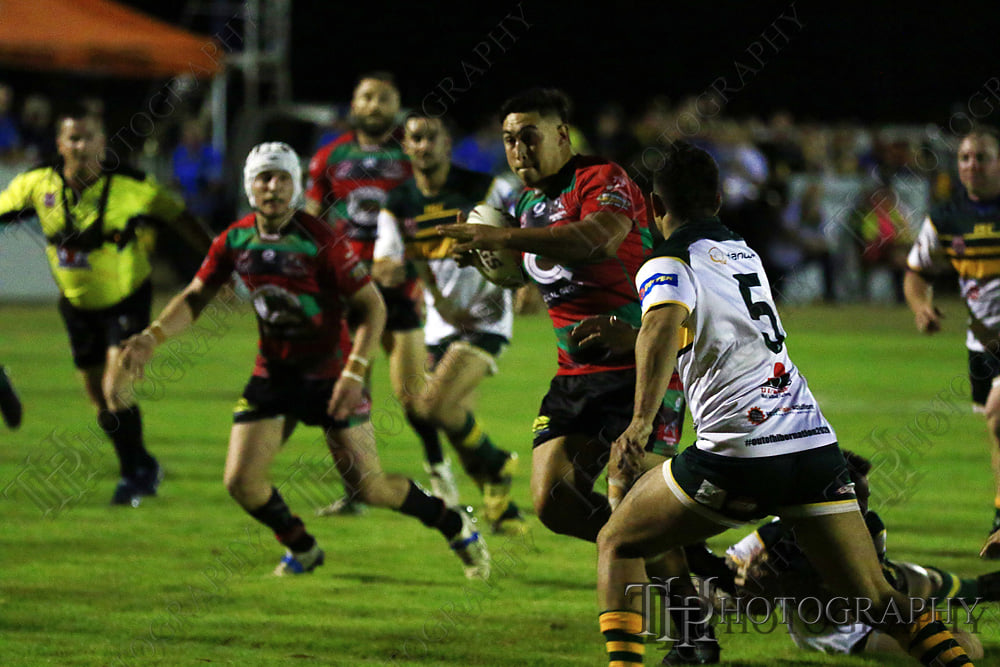 The Bluff Rabbitohs have created history by claiming their first Central Highlands title on home soil with an emphatic 40-18 victory over the Clermont Bears on Saturday night.

Previously winning A Grade premierships in 1991 and 2015 – both away from the home base of Macca’s Oval – the club overcame the agonising heartbreak of losing the previous three deciders in 2017 against Middlemount, in 2018 against Blackwater and in 2019 to Dysart to finally break the drought in front of a strong home crowd which quadrupled the small railway town’s population for the occasion.

It was a particularly momentous achievement for Highlands legend Mitch Wyatte, who called time on his career as a winner in his 15th grand final appearance.

Before the match, Wyatte said the Rabbitohs had set out to win the title for their long-time president Rodney Ohl who has been dealt an ill-spate of health recently.

“We set a few goals… old Rod, the long-time president of the club, he’s been battling cancer on and off, having to go down to Brisbane. We all sat down as a group and said let’s do it for Rod,” the multiple premiership-winning playmaker said.

“We’ve battled all season, playing short. With an old team, you know what it’s like with heaps of injuries, but we’ve turned up and turned up and we’ve won nearly all year and got to the big dance and won the chocolates.

“But full credit to Clermont. They’re a young team and I can see them going on a bit of a run I think if they stick together.”

The minor premiers jumped out of the blocks with pace, crossing in only the second minute when Rabbitohs fullback Pete McLaughlin fooled the goal-line defence with one of his iconic dummies before passing to 18-year-old winger Tristan Barron who was on unmarked on the south-eastern flank to score the first points of the contest.

Despite leaking early points, the Bears defence held firm for the ensuing 18 minutes, forcing a number of errors and poor fifth-tackle options on their opposition.

But in the 20th minute, a Clermont error led to a fresh set of six to the Rabbitohs only 10 metres from the line, allowing hard-running forward Isaiah Conway to break through and score the first of his double.

Trailing 12-0, things were looking ominous for the visitors, but upon forcing another error, mobile prop forward Trent White tucked the ball under his wing and ran 30 metres to score the first points for the Bears in the 25th minute, who were only trailing 12-6 at that stage.

That’s where the scoreboard remained for some time, up until the last set of the first half when some Mitch Wyatte magic from 40 metres out saw him duck and weave through defenders to cross next to the uprights, sending the Rabbitohs to sheds up 18-6 at the break.

After being in a similar situation at this very ground when the club lost the big dance to arch-rivals Blackwater in 2018, coach Kelly Conway and his charges didn’t want a repeat of the heartache three years on; nor did interchange forward Justin Daniels, who crossed five minutes into the second stanza from a McLaughlin desperation pass near the line.

Points kept coming for the Rabbitohs only three minutes later when Isaiah Conway pounced on a loose ball in front of the sticks to make it 30-6 and ‘The Burrow’ were in full flight of celebration when Wyatte saw the Bears shot for numbers on the right edge two minutes later, finding Ari Hannah on his outside to cross and all but put the result beyond doubt at 34-6.

With 23 minutes to go, Clermont finally found some ascendancy when Josh Wilkinson darted from dummy-half and cross and then in the 60th minute, a zipping-paced Jesse Johnson was in full flight to run away and give the green and gold hope, behind 34-18.

But with 10 minutes remaining on the clock, Mitch Power scooped up a bouncing ball down Clermont’s end and shot away to seal victory, claiming back-to-back premierships after wearing the No. 6 jersey for Dysart in 2019 against his current club. His conversion iced the game and added further two points to his personal tally of 16 points for the evening.

At full-time, there were tears of jubilation from diehard Rabbitohs fans, many who had lived through the disappointment of losing three grand finals on the trot.

No one was prouder than club captain Chris Conway who endured the rollercoaster over the journey.

“We’ve been in many finals and it’s pretty sweet to get it here at home and a cause we all put ourselves to at the start of the year.

“We wanted to do it for a special occasion and we’ve done it and it’s very sweet.

“We’re going to enjoy the night.”

The long-time Bluff champion particularly wanted to pay homage to the Rabbitohs’ passionate fanbase, with team wanting to reward them with not only the home final, but most importantly, the trophy.

“One of our biggest things was to get the home grand final and get the victory,” Conway said.

“We’ve had two home grand finals [previously] and two losses, but we didn’t want to think about that.

“We just wanted to go through the motions and we did tonight and came away with the win and we can’t be more happier than that.”

In the past 10 years, the club has featured in six A Grade grand finals, lifting the trophy on two of those occasions.