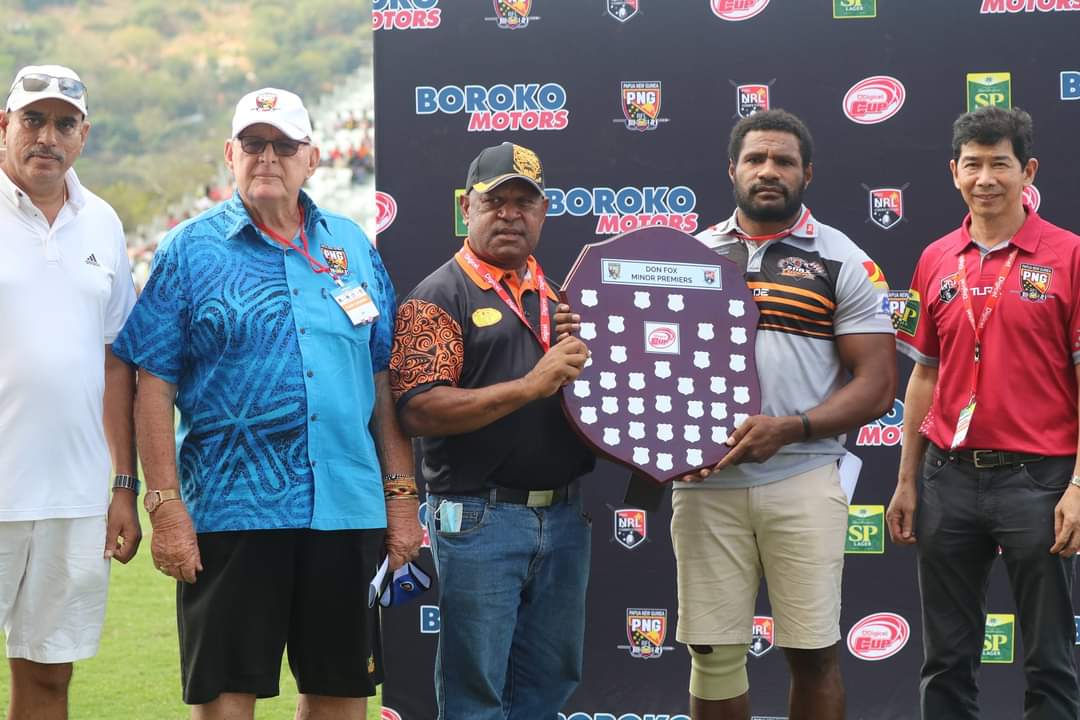 Mrs Janet Fox, widow of long serving PNG Rugby League administrator late Don Fox, has said the naming of the Digicel Cup Minor Premiership Shield after her husband was a kind and beautiful gesture and a great honour to his memory.

“He would undoubtedly be both extremely humbled, but very proud to receive this recognition as he always wanted Papua New Guinea to greatly achieve in Rugby League,” Mrs Fox responded in an email when advised of PNG National Rugby League Competition (PNGNRLC) decision to name the Minor Premiership Shield after late Don Fox last week. “Don’s heart was always in Papua New Guinea and he dearly loved the country and its people. He took great enjoyment in singing your beautiful National Anthem with love and pride.”

“I, Janet, together with my daughters, Joanne, Simone and Monique consider your thoughtfulness in naming this Shield after Don to be a truly heartfelt and magnificent gesture from the Papua New Guinea National Rugby League Competition and PNG Rugby Football League and we thank you sincerely for bestowing this honour,” Mrs Fox said. “I know Don will be watching from above with great affection.”

The PNG National Rugby League Competition (PNGNRLC) Board has announced that starting from this season and for many more years to come, PNG’s Digicel Cup Minor Premiers will receive the “Don Fox Memorial Minor Premiership Shield.

The Minor Ppremiers is the team at the top of the ladder after all regular season round robin games have been played.

“Don’s illustrious involvement with PNG rugby league began when he arrived in 1966. He was a goal kicking front rower when he joined the Magani Badili Rugby League club in Port Moresby.

“He played for Papua against New Guinea in the Inter Territory series captaining the Papua side in 1971. Don also played for the PNG Presidents 13 against visiting Australian teams including South Sydney, Eastern Suburbs and Western Suburbs.

“He played for Papua against New Guinea in the Inter Territory series captaining the Papua side in 1971. Don also played for the PNG Presidents 13 against visiting Australian teams including South Sydney, Eastern Suburbs and Western Suburbs.

He was Team Manager of the PNG Kumuls to the 2000 RLWC in UK and France.

He was Team Manager of the PNG Kumuls to the 2000 RLWC in UK and France.

In November 2011, he was requested to take up the position of Chairman of PNG Rugby Football League.

“In 2013, he confidently handed over the Chairman’s position of the Papua New Guinea Rugby League to Sandis Tsaka who still hold the post to this day.”

He remained on the PNGRFL Board as a Director until his passing on Friday July 3, 2020 in Brisbane.

Don was awarded the Life Membership of PNGRFL in Port Moresby on May 13, 2019. Don received the Order of British Empire (OBE) from the Queen Elizabeth 11 in 2009 for his services to sports and community.

PNGRFL Director Sudhir Guru presented the inaugural Don Fox Memorial Minor Premiership Shield to Lae Snax Tigers during the Elimination Finals in Port Moresby on Sunday. Tigers headed the ladder after round 11 on a superior for and against points percentage over PRK Mendi Muruks and JPG Waghi Tumbes.