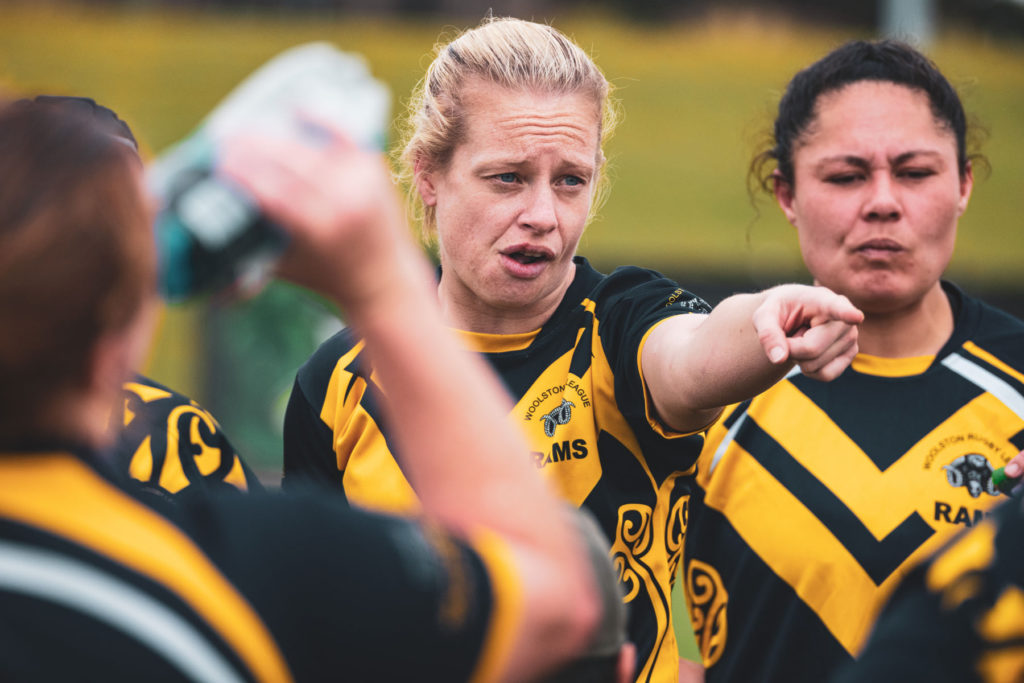 Sydenham Swans carried off last year’s CRL Women’s Premiership title with a 46-16 defeat of Woolston Rams, but both captains are anticipating are a much closer-fought contest when the clubs meet again in the 2021 Grand Final at Ngā Puna Wai on Sunday.

The Swans went undefeated through the regular season before snaring the first spot in the decider with a 28-16 semi-final victory over Linwood Keas. But the Rams have built up a head of steam, winning four straight – including a 44-4 thrashing of Burnham Chevaliers in their elimination semi and a convincing 28-10 success against the Keas, who they lost to twice during the season, in last Sunday’s preliminary final.

“It was all just building towards that semi-final and unfortunately Linwood had a couple of key injuries which we took advantage of a wee bit. It’s all just about getting to the end goal.”

Barker believes playing last weekend while the Swans cooled their heels will hold the Rams in good stead for the decider, providing another crucial opportunity to build combinations, cohesion and confidence.

“I think the extra game will do us good, we haven’t actually played too many games this season – it’s been a bit stop-start with a couple of games called off,” she explains.

“I don’t think we’ve got any major injuries out of last weekend so I think it’s actually a positive having played last week.”

Meanwhile, Swans leader Jerusha Whiley can see the double-edged sword of earning the bye by virtue of having won their major semi.

“It’s always good to get that break, but it’s an advantage as much as it’s a disadvantage,” Whiley says.

“Having the week off, we get to rest our injuries but at the same time after that break we’re having to build that momentum back up again.”

Whiley says her Sydenham outfit will rely on the tenets that got them this far – and forgetting about last year’s runaway Grand Final win, in which she scored two tries in a dominant individual display.

“Just sticking together as a team. Every team has their ‘why’, but we want to make each other our ‘why’ as well.

“We’re a really family-orientated team, so that’s what we use as our base – we treat each other like family and we hold that culture within our team as well. That’s what we rely a lot on is that team culture.

“But last year was last year, every game’s a new game. The majority of the team are rookies, so it’s their first season as well.

“One thing we can take away from (the Grand Final) last year is enjoying the game, having that passion and taking that joy we got last year and bring it into this year – we can also use that as fire going into Sunday.”

In a curious twist of fate, Sydenham and Woolston have not looked across the halfway line at each other since the 2020 decider.

The clubs’ Round 4 encounter was cancelled due to heavy rain and the Swans were unable to field a team for their showdown in the penultimate regular-season round.

“When you’ve played teams you’ve come up against a couple of times, you get to know their styles, their plays, their flaws and what they’re good at,” Whiley says.

“We haven’t played this team, so it’s a bit (of the) unexpected what they have to offer and bring – especially (compared to) last year.”

Barker is hoping that lack of familiarity will play into the Rams’ hands – while the inspirational second-rower contends that her side aren’t carrying any mental scars from the loss in the corresponding match last year.

“We’ve done a little bit of video analysis and have seen what changes they’ve got from last year. We have to play our best and not worry too much about what they’re doing – just play our game. We’ve got our processes and our game-plans, so we’ll just follow that and listen to our coaches and hopefully it all comes together on the day.

“We were very injury-stricken last year – we probably only had about 10 fit players out there. We can’t take too much away from that game, but at least a core group has that experience under their belt and played at Ngā Puna Wai, so we can use that to our advantage but we’re not concerned about the result from last year.”

Barker says the Rams will be rely heavily on gun halves pairing Cassie Siataga and Bayli Rapira – “two very different styles of play, but both very talented” – and lock Mikayla Werahiko, a New Zealand softball rep alongside Siataga – “a standout all season” – to guide the less experienced members of the team around.

Whiley will marshal the Swans’ troops in the halves alongside sister Corrina Whiley, a former New Zealand Test centre, while she has tasked forwards Bunty Crowe, a Kiwi Ferns rep and player of the match in last year’s Grand Final, Katey Arona and Easter Savelio with controlling the middle of the park.

But the skipper adds: “Everybody has input in the team and everybody gets a say. That’s part of the culture that we try to create – we’ve got nobody above, nobody below, we’re all on that same level.”

Jerusha Whiley has a close eye on the Rams’ key players, too.

“Fleur, her overall experience, physical, the mentality and everything. Cassie and Bayli are awesome halves, they really know how to direct their team and find some space, they’ve got awesome vision. They’ve got a good amount of experience across the field as well, so it should be quite an even game.”

The Whiley sisters have shouldered a heavy load this season – the Swans don’t have a head coach as such, so running trainings and warm-ups falls to Jerusha and Corrina, though brother Taurean has been a regular fixture on game-day manning the interchange and offering guidance.

The Rams have been fortunate to have club stalwart and 1999 Kiwi Fern Mary Brennan as coach, with Celebration Lions player Solomone Leka her assistant.

“Mary’s best attribute is that she can get the best out of the girls and convince them that if you don’t necessarily come from a sports background, you give it a go, have a try and get the absolute best out of them,” Barker praises.

“She’s got a nurturing side to her – it works really well.”

COVID-19 impacted every area of rugby league in Canterbury in 2020 – none more than the Women’s Premiership, which was reduced to three teams due to player numbers.

But the competition increased to five teams this season and the development of women’s rugby league in the region is headed in a positive direction courtesy of the introduction of Canterbury 13s and 15s age-group teams.

Both Grand Final captains are impressed by the way the women’s game has rallied after last year’s challenges.

“It’s been good having a couple of extra teams in there,” Barker says.

“I know all teams have struggled a little bit for numbers with injuries, so we need to increase that player base overall across all teams, then increase the skill level so we can hopefully get additional teams coming through.

“The (13s and 15s) girls went away and played really well in those tournaments from what I watched and what I know of the players, so that’s really exciting and hopefully they can keep that core group of girls together and build their skills, then they can come through into the women’s game as well.”

Whiley was similarly enthusiastic about the future of women’s rugby league in Canterbury.

“I think (last year’s challenges) helped the women’s grade, there’s a lot more recognition within Canterbury Rugby League, which is awesome especially with the younger girls coming through as well.

“The culture’s changed, the teams are all gaining a relationship off the field together as well. There’s more of a sisterhood and a union between the teams.”