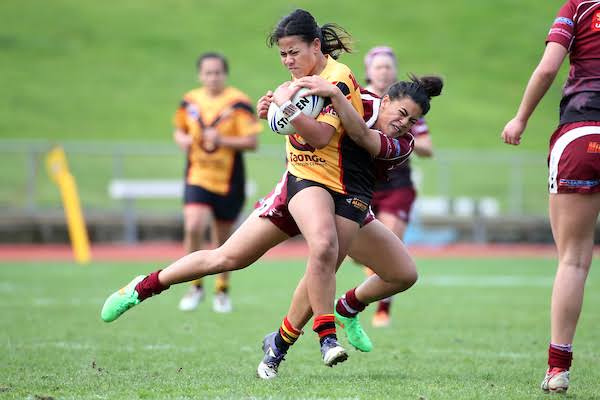 Match reports from Round 10 of the Farrelly Photos Women’s Competitions, played on July 9-11.

AUCKLAND WOMEN’S PREMIERSHIP:
Richmond 20 defeated Ponsonby 16
A Shaniece Monschau hat trick proved the difference for Richmond in a narrow victory over Ponsonby, which saw them jump ahead of the Ponies to finish the regular season in third position. Ponsonby had led 12-4 at the break before Richmond mounted a stirring comeback to claim victory.

Te Atatu 0 lost to Pt Chevalier 40
Debnorah Moors scored three times for Pt Chevalier in a shutout of Te Atatu. Another player who impressed for the Pirates was Wairakau Greig who was appearing at Premiership level for the first time.

Manurewa 56 defeated Pakuranga 0
Manurewa have achieved an unbeaten regular season after powering past Pakuranga in their last match before the Premiership play-offs begin.

AUCKLAND WOMEN’S CHAMPIONSHIP:
Howick 16 lost to Manurewa 22
Fetu Samoa international Ricshay Lemanu scored late to lift Manurewa to victory over Howick in a tight tussle at Paparoa Park. Howick had led 12-10 at the break and scores were locked at 16-all heading into the final 10 minutes, at which point Lemanu crossed for her second try of the game and secured the win for the visiting side.

Otara 16 lost to Taniwharau 40
A week on from suffering their first loss of the year, top-of-the-table Taniwharau bounced back with a victory over Otara.

Glenora 20 defeated Manukau 16
Glenora tasted victory under lights on Friday night, edging past Manukau in a thriller at the home of the New Lynn Stags, Lawson Park. Clementine Vare scored twice for Glenora, who earlier had trailed 8-4 at half time.