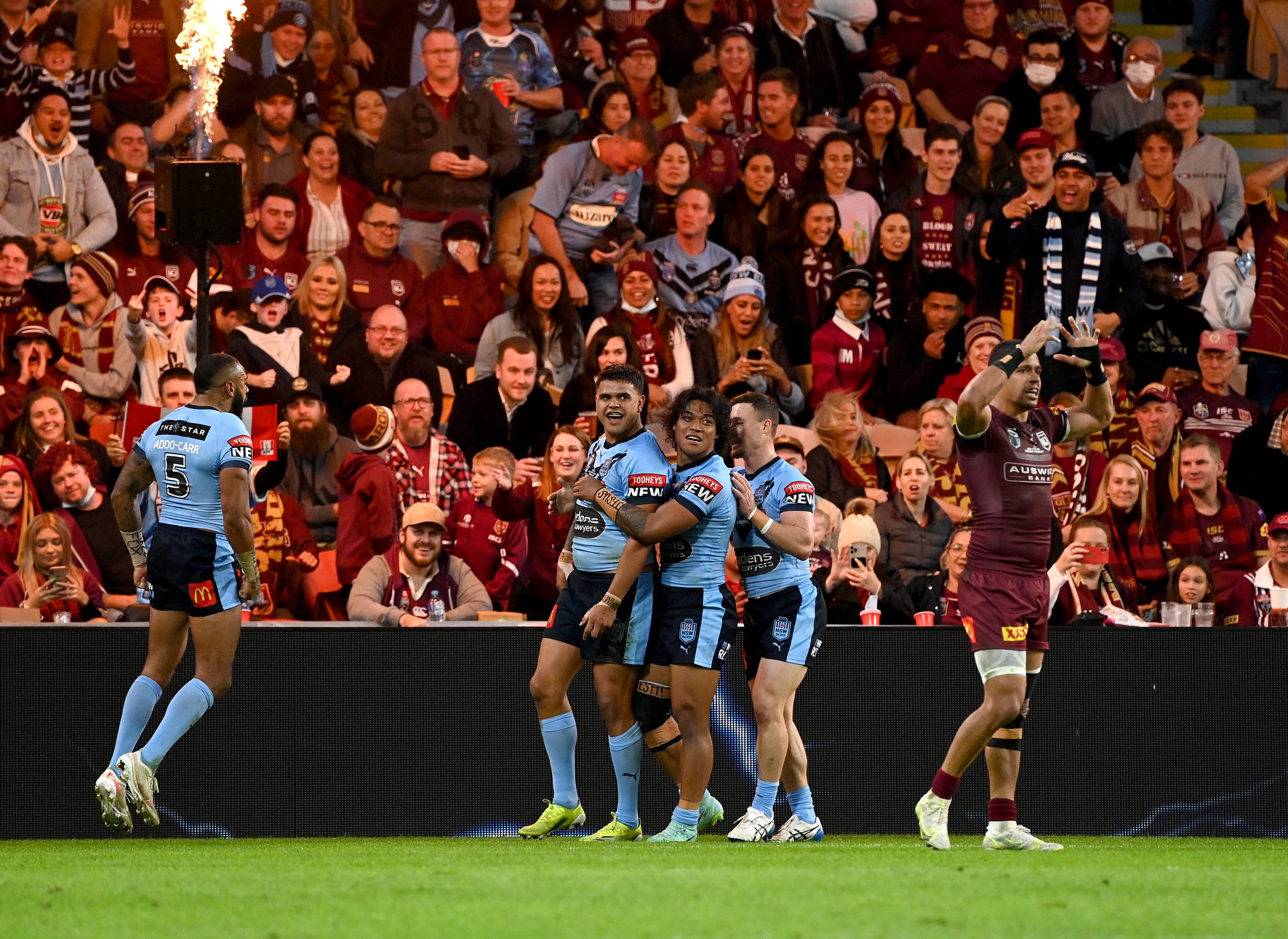 Most dominant ever: Blues seal series win over Maroons in style

There may have been a strong sense of deja vu when NSW reclaimed the State of Origin title with a 26-0 game-two thumping of Queensland at Suncorp Stadium on Sunday night.

But the Blues are now primed to pull off something never seen before in the Origin arena as they eye off their first series whitewash since 2000 and only fourth overall.

NSW are set to claim the most dominant series win in Origin’s history after picking up where they left off from their record 50-6 series opening triumph to keep the Maroons scoreless at Suncorp Stadium for the first time.

Captain James Tedesco and strike centre Latrell Mitchell proved the difference as the Blues ran in four unanswered tries in front of 52,272 fans to ice their third series win in four years.

After the runaway win blew the series points differential out to 70, NSW look set to eclipse the Origin record 62-point margin set by the Blues in 2000.

That series was sealed by the now infamous “hand grenade” celebration in the 56-16 win.

NSW are tipped to detonate again 21 years later when they look to clinch a whitewash in the Ampol State of Origin series finale at Sydney’s Stadium Australia on July 14.

The NRL is hoping to play the final game at the Olympic venue but Sydney’s COVID-19 lockdown until July 9 has forced officials to consider contingency plans such as Newcastle’s McDonald Jones Stadium.

Fittler was the captain of the all-conquering 2000 side. “That was a great team,” he said.

Tedesco said the 2021 outfit would relish the chance to add their name to the record books in game three.

“I couldn’t remember the last time there was a full sweep. I remember back then around the 2000 era there were some of the best footy players that we’ve had in our time,” he said.

“It’s pretty rare to get the sweep. With the team we’ve got, there’s no reason not to. Especially going back to a home game in Sydney or around Sydney, it would be pretty special to go three-nil and lift the shield in front of our home fans.”

Winger Josh Addo-Carr notched a try-scoring double but it was Tedesco and Mitchell who led from the front.

Mitchell dominated in defence, pulling off a one-on-one strip that set up Addo-Carr’s opener before scoring an 85-metre intercept try to give the visitors an 18-0 half-time lead.

Tedesco also stood tall as the only survivor of the last NSW team to have savoured victory at Suncorp Stadium way back in game one 2017.

It marked only the third time in 15 Origins they had won at the Brisbane venue. Whatever happens in game three, NSW have already entered elite company in the record books.

The Blues have become the third team to claim a series before stepping foot in their home state and only the second NSW outfit since 1997.

But they will have no defence under new coach Paul Green in 2021 after letting the series slip and being held scoreless for only the third time overall in Origin history.

Cynics would have argued the stage was set for a Queensland comeback win following a nightmare lead-up for the hosts.

Queensland almost ticked off everything on Origin bingo after being hit hard by injury and illness. There was no Kalyn Ponga, AJ Brimson or Harry Grant.

Forward Jai Arrow was treated in hospital in the lead-up with an arm infection.

Teen sensation Reece Walsh was denied a much-anticipated debut after suffering a hamstring complaint at the captain’s run.

That was bad but nothing compared to the eligibility drama that forced Cronulla winger Ronaldo Mulitalo to withdraw on game-day morning less than 24 hours after he was added to the line-up for Walsh.

Time and again it had been enough to spur the Maroons on to claim a a dramatic win.

But it wasn’t to be as nothing went right for the hosts on Sunday night, letting three try scoring chances slip as the Blues ran away with the game.

The Blues drew first blood when Addo-Carr latched onto a sublime James Tedesco cut-out pass to score in the 12th minute after Mitchell gifted the visitors prime position with a one on one strip on Feldt.

The Maroons tried to rally and were finally primed to hit back when Tedesco knocked on close to his line, only for Mitchell to break their hearts in the 26th minute.

The South Sydney superstar pounced on a Valentine Holmes pass and ran almost the length of the field, evading a fast approaching Xavier Coates to give the visitors a 12-0 lead.

“We talk about vision but Latrell is one of those freakish players who can do in attack and defence,” Immortal Andrew Johns told Channel Nine.

Cameron Murray knocked on to bomb a certain try in the 30th minute but Tom Trbojevic made no mistake three minutes later, crashing over for his ninth meat pie in seven games after an Addo-Carr bust.

Addo-Carr sealed his double in the 70th minute after a 50th-minute penalty by Nathan Cleary who was troubled by a shoulder complaint.