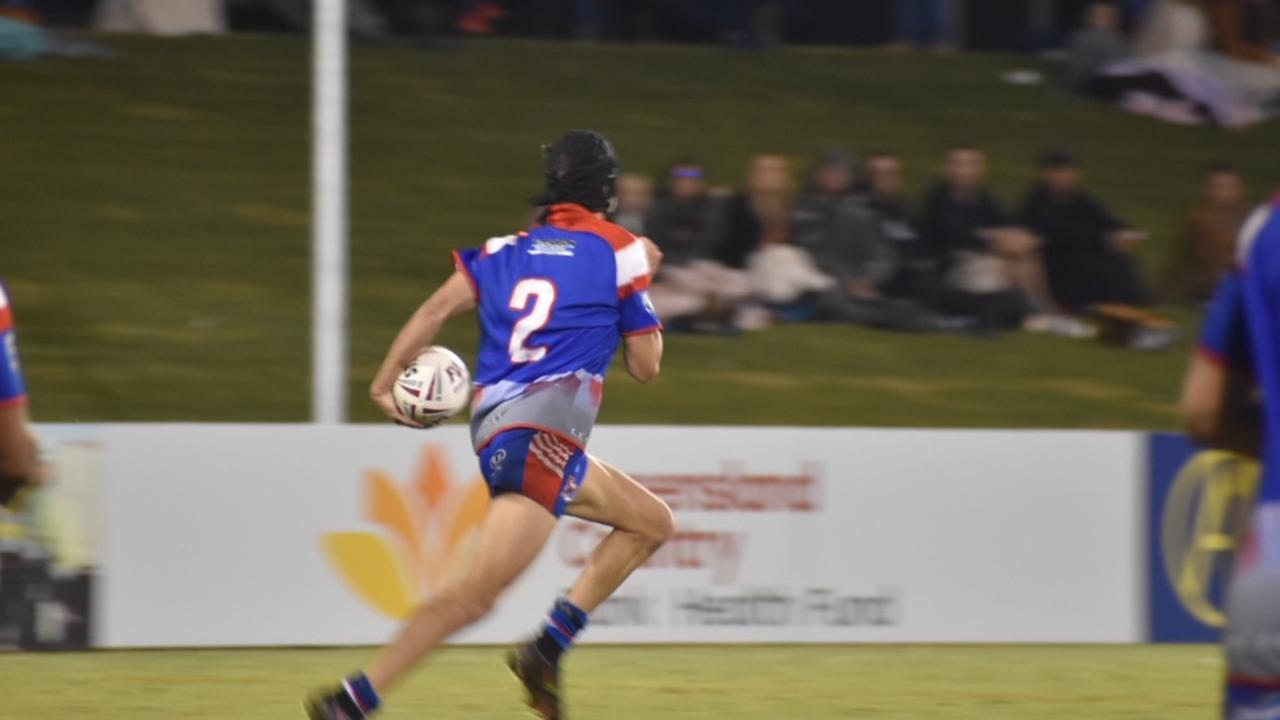 Whiz kid Chris Woodbridge quite literally snatched victory from the jaws of defeat with an amazing 100-metre intercept try in the dying minutes to send the Toowoomba Clydesdales to the XXXX League Championship decider.

In a semi-final match that will be talked about for some time to come, the Rugby League Mackay and District Cutters fought back in the second half to gain the lead by a mere two points until the Pittsworth Danes fullback repaid the faith shown in his late call-up last week, scoring the match-winner under the posts to clinch a 28-24 victory at BB Print Stadium in Mackay.

“It feels pretty good… it’s unreal to be honest,” Woodbridge said post-match, describing the defining moment of the match.

“I saw it coming so I just went for it because I think there was about three minutes left so I thought… ‘yeah, I’ve just got to try and do something’, so I just went with my gut and got the reward in the end.”

Called up into the side late to replace fellow speedster David Armstrong, the 20-year-old said making his Clydesdales debut in such an occasion was a special feeling.

“It means everything,” Woodbridge said.

“I’ve been trying to take it to the next level and when I got the call-up, it was pretty good.

“I typically play fullback for Pittsworth but got the call-up to play on the wing and I moved between there and fullback tonight and I really enjoyed that.

“It was a pretty tough game. It was really hard and really fast compared to the Toowoomba Rugby League.”

A brutal opening stanza entertained more than 1200 people watching the star-studded Cutters in action against the Clydesdales, but it was the visitors who scored first when hooker Danny Wassell saw an opening near the goal-line and scooted over to bag first points in the 18th minute.

A set play going through the hands from right to left allowed Toowoomba’s Mitch Watson to cross untouched three minutes later as the makeshift centre, who started on the wing but was forced to moved one in due to an injury to Dwayne Duncan.

Trailing 10-0, the home side wanted points and turned to their experienced fullback Ben Barba, who showed some razzle dazzle in a set play from a scrum 10 metres out, scoring in the 24th minute.

The Clydesdales rake was involved in more points in the 33rd minute when the 47th Battalion winners hit back, grubbering to birthday boy James Tutuila who dived on the bouncing ball to extend their lead to 12 points.

Nearing the break, Ewan Coutts ran a brilliant line to find a hole in the defensive line, running 30 metres to stroll over and edge closer to the visitors; but the unsuccessful conversion left the score at 16-8 going into the sheds.

Mackay were quick to minimise the ledger two minutes into the second half when Keelyn Tuuta muscled his way over to plant the ball over the white stripe.

The Cutters then took the lead when Barba dropped Isaiah Cooper-Tetevano under him to split defenders and send the fans into hysterics in the 47th minute.

A penalty goal by Marmin Barba in the 64th minute extended the Cutters’ lead to 22-16 before the Clydesdales tied the match with a lapse in concentration from their defenders.

On the back of a penalty tap near the line, stopgap half Blake Mara put Ty Gardner through a hole to score the equaliser and Woodbridge’s sharpshooting put the Toowoomba side back in front with just under 10 minutes remaining.

As both teams were scrambling for the extra-time briefing notes, the Cutters were awarded a penalty right in front of the sticks in the 74th minute, to which Marmin Barba pointed to the sticks to place the home side back in front once again.

As everyone in BB Print Stadium teetered on the edge of their seats in the dying minutes, the do-or-die play came off with three minutes to go; Woodbridge contentiously charged off the goal line to intercept a Mackay pass and ran the length of the field to send the Clydesdales home with the win and a ticket to the big dance.

“We were pretty nervous… we probably got a little bit lucky at the end,” Duggan said.

“It was certainly a good game of footy and we are happy to get away with the win.”

But the Wattles old boy couldn’t be any more proud of his troops who suffered a number of injuries throughout the contest.

“We finished up with no one on the bench. We didn’t have a reserve. We only had one for basically 60 minutes,” Duggan said.

“We had guys going down everywhere and the boys dug deep and got the job done. I couldn’t be happier.”