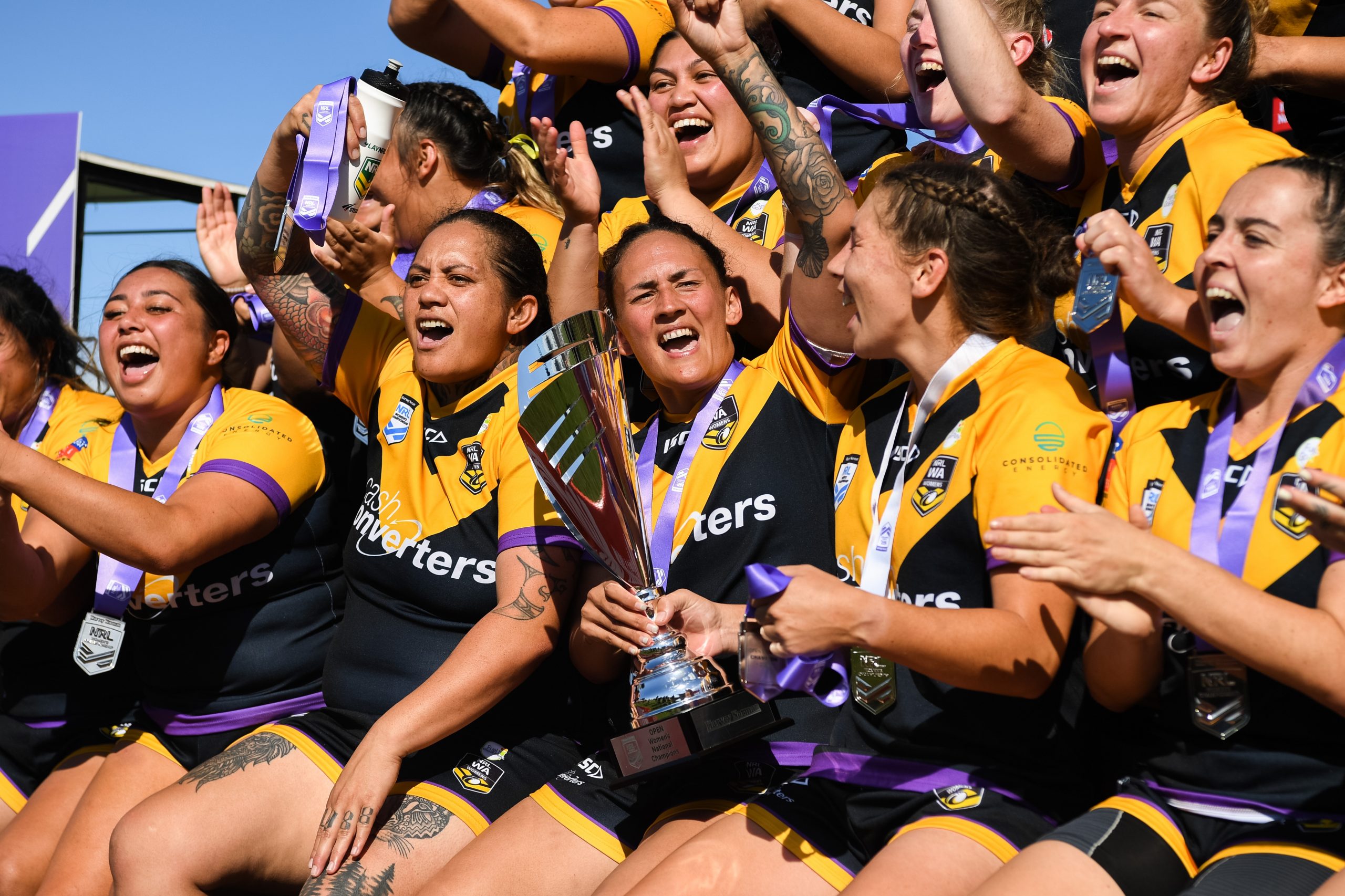 Match-winning halfback Kailey Thompson hopes the progression of women’s rugby league in the state grows after the side won the Harvey Norman National Championships opens final on Sunday.

Thompson was named player of the tournament for the opens division following a thrilling 10-6 win over the First Nations Gems in golden point at Moreton Daily Stadium.

A try in extra time to WA co-captain and former NRLW Dragons forward Anneka Stephens broke the deadlock in a thriller at Redcliffe that had every bit of drama.

Thompson was in the middle of it all, nailing a penalty goal with two minutes remaining to send the game into sudden death.

Then came in an experienced Stephens, who lifted with the game on the line and handed the west their first piece of silverware in the women’s game.

“It felt like one of those ‘this is it’ moments that you dream of when I was taking that penalty goal to level us up,” Thompson told NRL.com.

“I knew the composure that we needed and then for Anneka to come up with the big play, it’s honestly the most amazing feeling.”

Thompson, a former Kiwi Ferns squad member who relocated to Perth almost a decade ago, believes the win can help develop the women’s game in Western Australia.

“It’s huge, a lot of us have come from different places in WA and we’re small in size with registration numbers.

“To come here and show we can play is really cool. I’m really committed to helping the game in WA so that when we do come to these events we can compete.”

Earlier, Western Australia led the First Nations Gems 4-0 after 20 minutes in a physical first half that included a bit of push and shove between the two sides.

A line break from Thompson set the tone for Western Australia early with the experienced halfback finding Mariah Bell out wide to open the scoring.

Western Australia did well to starve the Gems of possession for most of the contest, even winning a scrum against the feed with a traditional push that saw five-eighth Akira Kelly spill the ball.

Gems utility Rikka Lamb did her best to inspire her side before half-time but was run down before being put into touch by WA’s Melissa Thomas.

Western Australia had a chance to extend their lead in the second half but Bell couldn’t hold on to a difficult pass on the run.

A well-placed kick from Gems halfback Kiya Simon put pressure on WA winger Tiarne Barnett to get out of the in-goal but the flyer was collected by a high shot to let the side off the hook.

The intensity of the match lifted as the clock began to go against the Gems with a bit of ill-discipline coming into Western Australia’s game to give them an opportunity to strike back.

Another Western Australia error out of their own end helped the Gems get on the board and level the scores.

Gems forward Tawana Sullivan-Togo finished off a backline spread to go over in the corner before Kelly had a chance to hand the Gems the game.

Her sideline conversion, remarkably, hit the crossbar to send the game into extra time, before Stephens broke the side’s hearts with the game on the line.

“It was good because I hadn’t got over the line all week so was getting stitched up by some of the girls,” Stephens said.

“If we didn’t score then I reckon that was the game. I am so proud of the girls. I really hope we grow from this. We’ve had a little bit of success in the past.

“I hope we focus more on the women now and can build from this.”

In the other play-off matches for the day, Northern Territory beat South Australia 20-6, while the Australian Defence Force defeated Victoria 12-0.