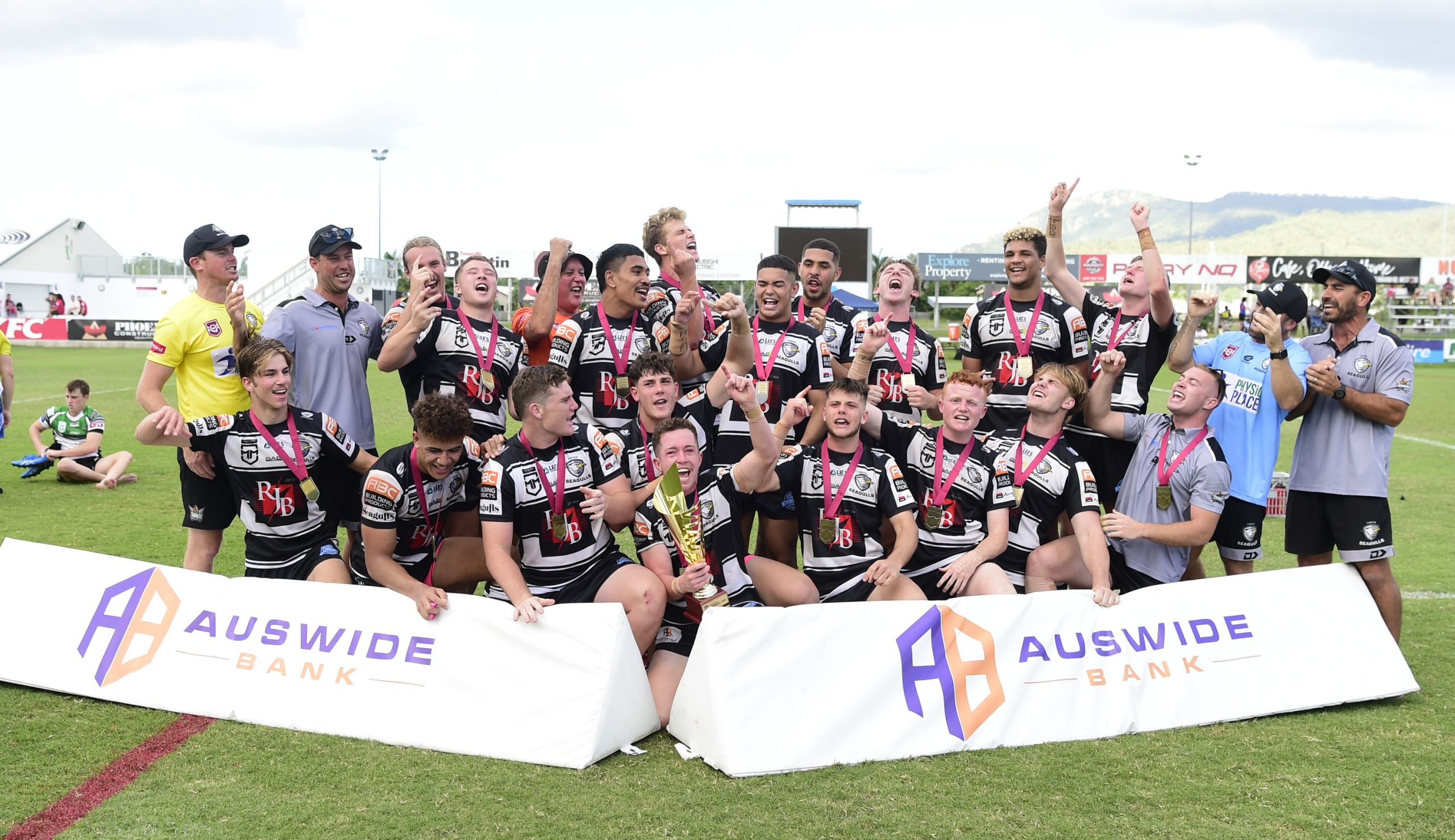 The narratives of grand finals drip from the pages, everywhere you turn during finals week is a story or angle.

How would Tweed cope without their massive middle forward Jack Cullen? Would Palm Beach Currumbin alumni be too good for the Kirwan State High boys playing for the Blackhawks? Thirteen players came from the two schools today.

The defensive juggernaut the Blackhawks with 34 points against in seven matches; Tweed the defending premiers were not going to give over their crown without a fight.

Everywhere you looked was a story.

Townsville fans had just found their seat and were reaching for their first hot chip when Damon Marshall went straight through on the left-hand side and found his half Duffy to give Townsville the perfect start.

Tweed kept absorbing plenty of pressure on the back of two penalties; Blackhawks were held up over the line.

When it was Tweed’s turn to attack half Harradyn Wilson rolled it in for a repeat set and Tweed settled in to testing the Blackhawks defence.

Deine Mariner got the Seagulls on the board with a scoot from dummy half, scoring his fourth try in two weeks after three last week against Wynnum Manly Seagulls.

The Tweed ginger hooker Bryant was running to find shade and sunscreen in the Townsville sun and went straight through to find fullback Jaylan De Groot back up the middle.

Tweed were warming up nicely when Brock Priestley slammed the ball down on the right and gave the Seagulls a 18-6 lead.

Tweed were starting to look up an extra seat for the Auswide Bank Mal Meninga Cup’s flight back to the coast when Townsville’s hooker Baira-Gale was ruled off-side in front of the posts and Tweed half Tom Weaver took the two points for a 20-6 lead.

Baira-Gale made up for the off-side when Tweed dropped the ball and the hooker forced his way over taking a front rower hit up off the tap.

It was a much more positive half-time for Townsville at 20-12.

The Blackhawks started the second half with a kick out on the full but Tweed couldn’t take advantage of the error.

The Blackhawks continued their fight back in the second half with massive defence that forced errors.

But Tweed found a way to not let the Blackhawks through, led by fullback Jaylan De Groot, who kept finding the right option for his team, throwing his body around and defending his line.

It was that man Baira-Gale who found a way through the Tweed’s defence with his second try; the hooker took off on a 45-degree angle and found his way over.

At 20-18 Townsville had the momentum and Dudley Dotoi wanted a piece of that when the Blackhawks went left and second rower William Latu offloaded to flying inside runner Dotoi.

The Blackhawks had a lead for the first time since the second minute 24-20, with seven minutes left.

The last chapter of this grand final was written in black and white.

Seagulls went upfield, offloading and finding Brock Priestly in space on the back of a quick play the ball interchange dummy half Blake Mozer exposed some confusion in the line and dived over for the Tweed to have a two-point lead with two minutes remaining.

Tweed weren’t finished yet and Kaleb Ngamanu stole the ball denying the Blackhawks a comeback to score on full-time and give the Tweed the win.

“The start wasn’t ideal but games go for a long time, so it was just stay calm, stick to the plan and plenty of time to fix it,” Maccan said.

“Mozer and Bryant were just outstanding and I just had to figure out the best way to use them.

“I had to get Mozer back out there to clean up for us and keep tackling and then that massive play at the end for the try.”

“I think we have better depth this year, 2019 was a great side but this year we have depth across the squad,” Maccan said.