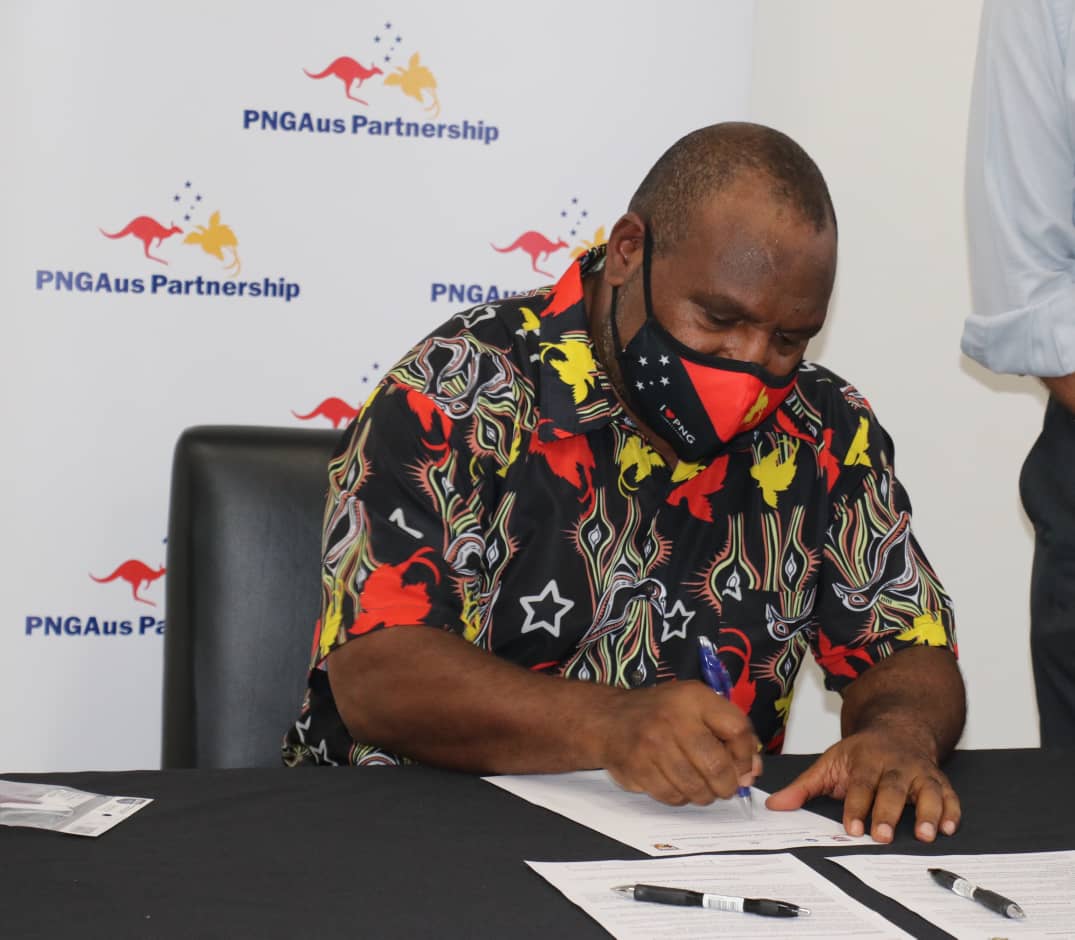 Prime Minister Hon. James Marape yesterday signed a sports partnership agreement on rugby league with Australia.
He signed it with Australian High Commissioner to PNG, Jonathan Philp, after they farewelled the PNG Hunters team to Queensland.

The agreement will pave way for two technical officials, paid for by Australia, to help the Hunters in the areas of marketing, and professional sports and career development.

PN Marape said the level of relationship and cooperation between the two governments, at people-to-people level and now in sports, was getting stronger.

“On the back of SP PNG Hunters leaving for a long-term residential stay in Australia, we are happy to sign a partnership in the area of sports, especially rugby league, between our two nations and stakeholders in sports, ” he said.

“The partnership is reaching another level where we are fielding a sports team, our own PNG SP Hunters rugby league team, to be based in Australia for up to nine months for the 2021 Queensland Cup season.

“The Hunters being able to leave our shores and go and reside and play in Australia is made possible under Visa Class 408, where our Hunters franchise is now an Australia registered entity.

“That is a very strong partnership at the highest level with the Australian Government and its mission here in Port Moresby, and the kind support from the governments of Australia and State of Queensland.

“We are now sending a team to reside and participate in their Queensland Cup competition and that is a pathway for Papua New Guineans who want to excel in the fields of sports.”

PM Marape said the PNG Government, under his leadership, had deliberately parked sports with the Ministry of Higher Education Research Science and Technology (DHERST) to ensure sports became a career option for young people.

He said PNG also wanted to ensure its elite sports personalities were able to go and live, work and or play in Australia.

“Australia is the closest market for us to export our sportsmen and sportswomen, as well as in other areas of work and life beyond high school and rugby league,” PM Marape said.

“We are now exploring all other available options between PNG and Australia.

“We are starting off with rugby league but we also want to expand into other sports as well.

“Today, we have sent off our Hunters, and we are happy as we want to use that as a stepping stone to get a PNG Team in the Australian NRL.

“But before that, we have to tidy our local rugby league competition in the country to produce more talents to join our semi-professional competitions and make their way onto the PNG Hunters. “