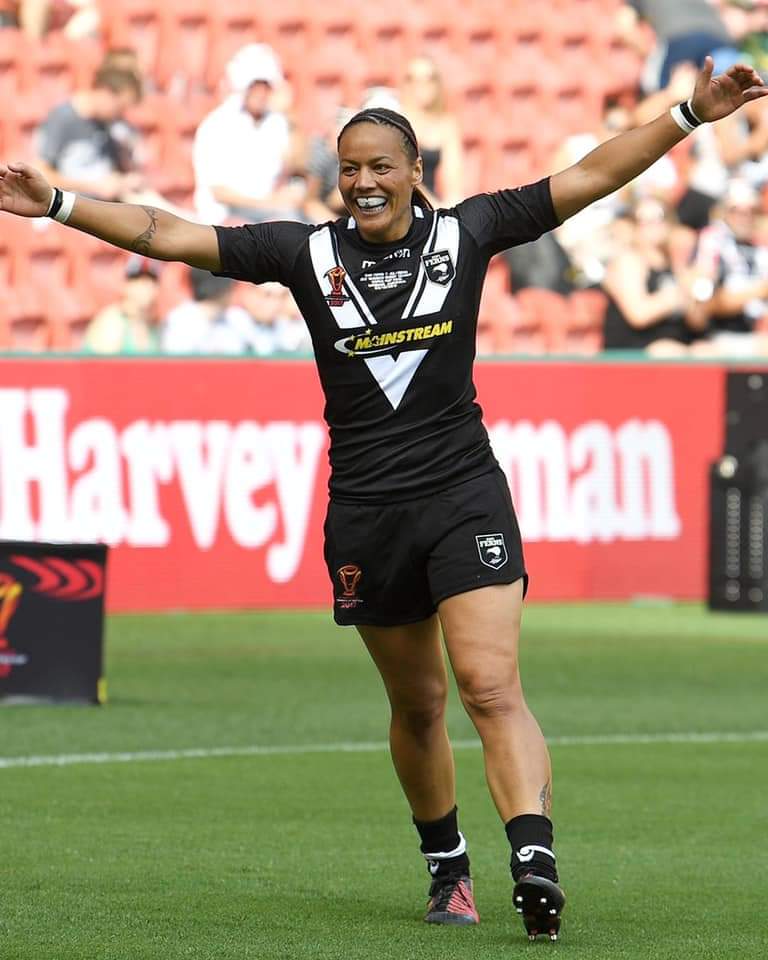 Her 32 Test tenure in the Kiwi Ferns jersey includes four World Cups spanning 18 seasons. She was named in NRL.com’s Women’s Rugby League Team of the Decade (2010s) and appointed a Member of the New Zealand Order of Merit for her services to the game, cementing her standing as one of women’s rugby league’s all-time greats.

Kiwi Ferns fixtures were scarce in the ensuing years, but the blockbusting centre was one of several players to back up for their successful World Cup title defence in 2008.

Hireme, who by now was representing Counties-Manukau, captained the Kiwi Ferns at the 2013 World Cup, where they relinquished their crown to Australia via a 22-12 loss in the final. Despite the defeat, Honey was named Player of the Tournament.

After turning out for the Kiwi Ferns at the 2017 NRL Auckland Nines, Hireme ended a three-year absence from the Test rugby league arena at that year’s World Cup. The Papakura Sisters star played four matches on the wing and was the tournament’s top try-scorer with 13 – more than double her closest rival. Hireme scored six tries in the pool-stage thrashing of the Cook Islands, a hat-trick in the semi-final defeat of England and a brilliant first-half double in the gallant loss to Australia in the final.

Hireme was snapped up by St George Illawarra for the inaugural NRLW premiership, playing all three of the Dragons’ games and averaging 129 metres. She was outstanding in New Zealand’s subsequent Test loss to Australia in Auckland, making three line-breaks and a game-high 214 metres in the 26-24 thriller as she showcased her trademark speed, power and fend.

Having returned to the Waikato – playing for Hamilton City Tigers and representing Wai-Coa-Bay at the NZRL National Women’s Tournament – Hireme was named Kiwi Ferns captain for the mid-2019 Test against Fetu Samoa. She scored two tries and again ran for over 200 metres in the 46-8 win.

Honey signed with the Warriors but sat out the 2019 NRLW campaign to be with her mother, Caryn, who sadly passed away on September 25. Just weeks later she returned to the field to lead the Kiwi Ferns to World Cup Nines glory; Hireme scored four tries and was named in the Team of the Tournament.

The inspirational 38-year-old was a shining light in the Kiwi Ferns’ 28-8 Test loss to the Jillaroos in Wollongong, scoring their only try of the second half and running for a team-high 127 metres.

2020 saw Honey miss out on the NRLW Warriors campaign due to injury but represent the Upper Central Stallions with pride as they took out the inaugural NZRL National Women’s Championship.

Honey was then called up for the 2020 Kiwi Ferns camp in preparation for what would be the only New Zealand International for 2020 against Fetu Samoa Invitational.

The Kiwi Ferns veteran in amongst nine debutantes showed her class, helping lead the Ferns and new aged squad to a 28-8 victory. Unbeknown to most, this was Honey’s last Test for the Kiwi Ferns as she made the difficult decision to call time on her 18-year career.

“Leaving the jersey in a better place!” says Honey.

“Deciding to retire has been a really hard decision, my heart and my mind would play footy till I’m 50, but my body tells me my time is done. I love my team, my sport and I love to compete, I have given all I can as a player and have always aimed to give nothing less than my absolute best.

“Although I may not be out on the field, making an impact, I will continue to serve the game off the field for many years to come. Every teammate, every coach, every manager, trainer, medical staff, support person, mentor, fan, friend and most of all my loving whānau, Thank you for being a part of this journey, for your guidance, support and love I am truly grateful to you all.

Greg Peters, NZRL CEO, says, “On behalf of everyone in our rugby league communities we would like to thank Honey for her outstanding service to the game and for all she’s achieved.

“She’s paved the way for countless women to get involved and succeed in rugby league, and she will continue to serve as an invaluable role model both on and off the field for years to come.

“We are extremely lucky to have had someone of her calibre wear the Black and White jersey for so long and we can’t thank Honey enough for her over and above dedication to the game and its communities – which I’m sure will never end.

“She absolutely will be missed, and it’s sad to see her call time on such an outstanding career but she’s a great ambassador that embodies everything great about this sport, there is no doubt she has left the jersey in a better place.”