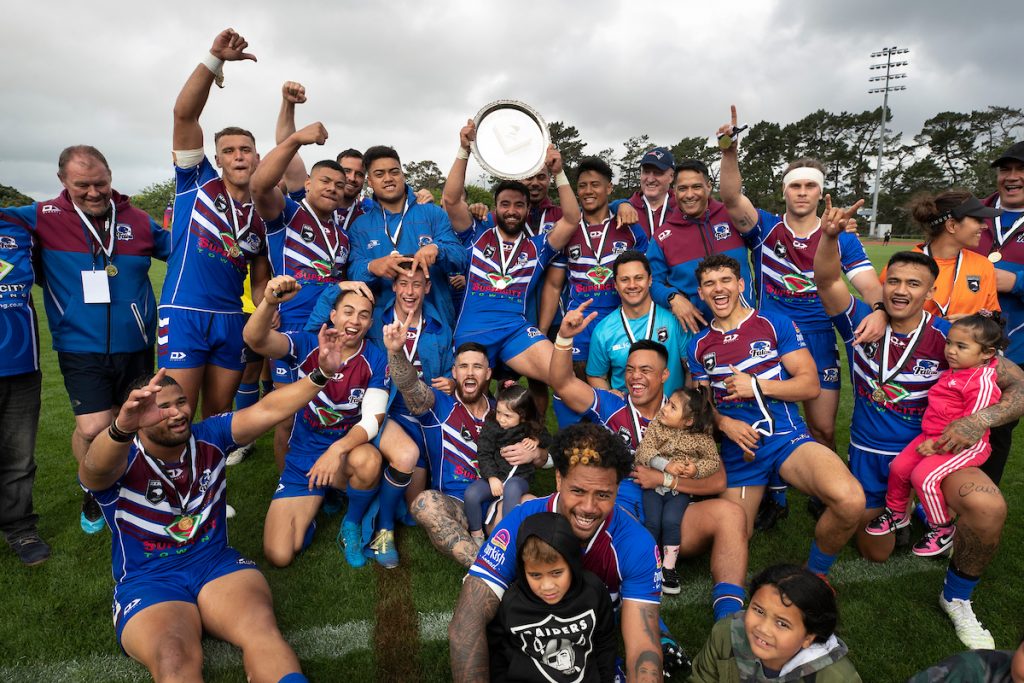 Old foes Akarana Falcons and the Counties Manukau Stingrays took the field today for the final of the NZRL National Premiership at Trust Stadium.

Preston Riki put first points on the board for the Falcons, pushing his way over the defence in the opening minutes of the match.

Enthusiastic defence from the Stingrays forced an error on the Akarana Falcons just 10 meters from their try line allowing the Stingrays to launch an attack of their own. After a mistake from the Stingrays, the Falcons took advantage and forced their way downfield, Riki scoring his second try of the match in the same spot within the first 11 minutes.

Counties Manukau’s Penehuro Toai came short of scoring the first try for his team, handing the ball over on the fifth tackle. Akarana immediately put the foot down and took the ball to the other end of the park after a perfectly timed kick from Api Pewhairangi. Francis ledger helped himself to four points, scoring an impressive try just short of the dead ball line. Sam Faapito showed his skill on the wing showing extraordinary pace to score a follow up try, increasing the lead over their opponents by 24 points in a matter of minutes.

An energy shift for the Stingrays saw Richard Holani score his team a much-needed try with only 6 minutes to go in the first half.

Counties Manukau their own worst enemy awarded the Flacons a try off an intercept. Ray Tuimalo-Vaega ran 80 meters to score an excellent solo try to increase the Falcons lead at half time 30 – 6.

Points came quickly in the second half for the Akarana Falcons. A dominant attacking line saw Faapito stroll over the try line twice within 10 minutes for his hattrick. Akarana took advantage of mistakes the Stingrays didn’t learn from.

Facing an uphill climb, the Stingrays weren’t ready to back down just yet. Toai crashed over to score his first try. The try coming a little to late to change the outcome of the match.

Dominance continued for the Akarana Falcons as tries kept rolling in. It started with Chase Bernard slipping off 2 defenders to score the 8th try for the Falcons. Off another excellent kick from Falcons teammate Pewhairangi, Casey Smith quickly followed up with a try of his own. A deflated Stingrays team allowed yet another untouched try to the Falcons through Matiu Stone Dunn. An excellent 11th team try for the Flacons saw Pewhairangi score after weaving around the defence.

Cole Waaka would close out the match for the Akarana Falcons scoring a try in the last minute of the match. The Falcons finish the season in convincing fashion, winning their fifth consecutive Premiership title with the final score over the Counties Manukau Stingrays 64 – 18.