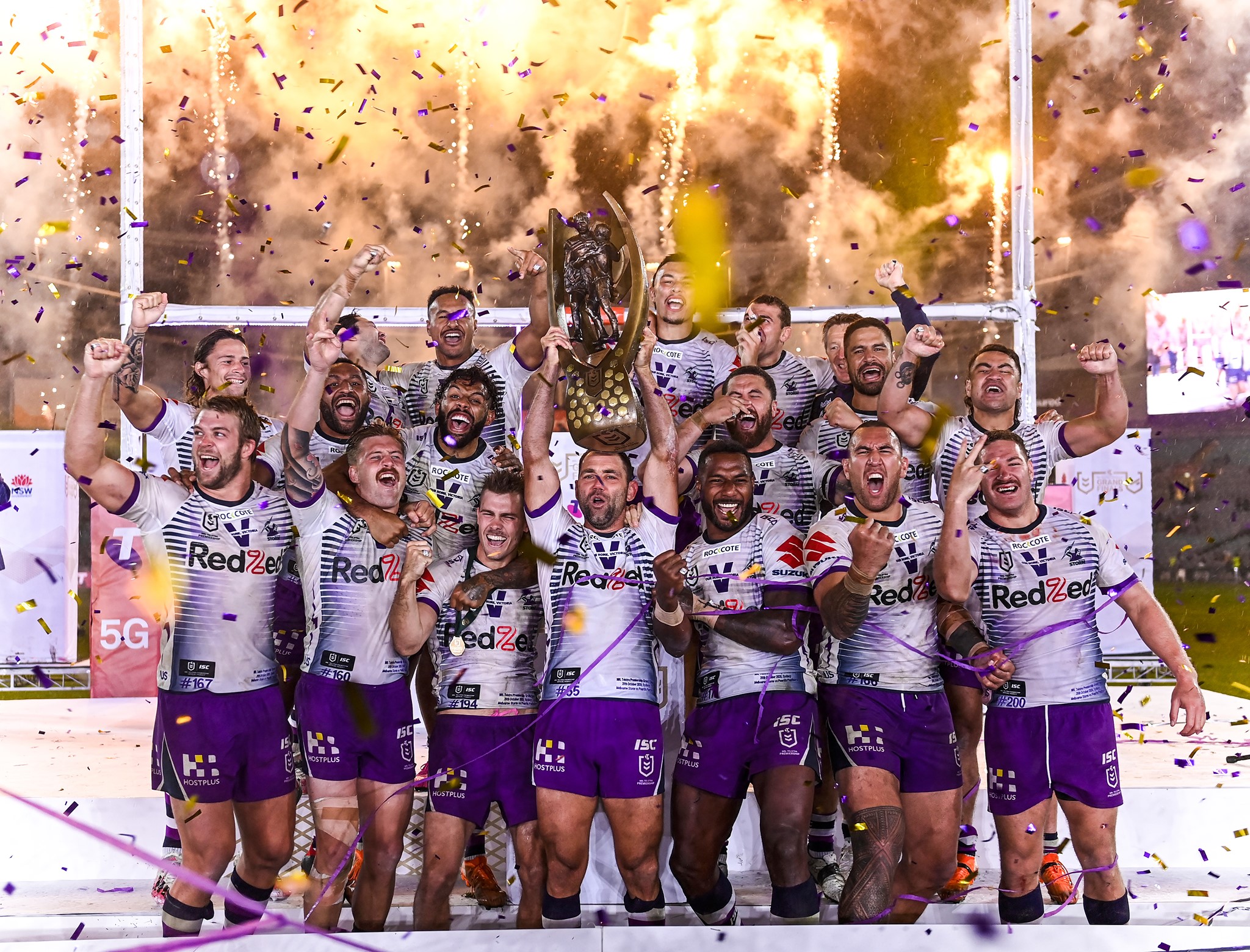 Cameron Smith and Craig Bellamy have combined – with almost 100 years of rugby league royalty between them – as the oldest player and coach to win a premiership in the game’s history.

Rarely has that wealth of experience proven quite so definitive as their third title and ninth grand final together.

The Storm simply blew an overawed Panthers outfit off the paddock for almost an hour to lead 26-0, Penrith eventually finding their feet and their way back into it for the last stanza.

As a side with 17 straight triumphs to their name, the Panthers refused to wilt.

They found themselves up against 11 men to finish when first Jahrome Hughes (71st minute), then Brandon Smith (80th minute) was given an early breather.

Nathan Cleary even set up one last frantic, fantastic crack at going to golden point, with a superb solo effort in the final minute.

Yet as with all the Storm do, Smith, 37, marshalled his men with aplomb.

Not that they weren’t nervous about it as Penrith finished fast.

“The last 10 minutes was certainly a bit helter skelter and when Jahrome went to the bin, I didn’t feel comfortable then at all,” Bellamy said.

Ryan Papenhuyzen was a Clive Churchill Medallist none in the 37,303-strong could argue.

But following the same lead their skipper has struck through 430 NRL outings, Melbourne were ruthless whenever given half a sniff.

If this is his last as many expect, it truly is a perfect Storm send-off.

For 123 days now, this club has lived out of home and out of state, keeping both their season and the NRL alive as their home town went through lockdown.

The graft and grit that has characterised their entire campaign, and every one of Bellamy’s 61 years, was right there as Penrith first piled on the pressure from a mountain of early possession, then came at them with all guns blazing to finish.

“They stay in the fight. We’ve done it a few times this year and that’s why Penrith finished first, they’re a champion team and they kept coming.

“When Jahrome went in the sin bin that was probably the point where a lot of us felt a little bit nervous about the last eight and half minutes.

“But we had the legs left in us to hold them out. The good teams find a way to finish those games, we’ve got a really tough, very resilient group in there.”

That Melbourne led 10-0 after defending their line for five sets midway through the first half, said it all.

Ultimately, the final say came after just half an hour.

For all of Melbourne’s big-game experience, it was Penrith’s own marquee man Cleary with the play that told the tale of a definitive opening half.

Nigh on two decades of professionalism up against the impetuousness of a young side still on their way up.

With the Panthers pressing and already chasing that double-figure lead, Cleary rolled out a looping, loping long ball in search of vacant pastures for his outside men.

Waiting and watching was Suliasi Vunivalu. Swooping then stumbling, then striding and finally streaking away.

What could have been six points at one end was a turnaround of 12 at the other.

A 16-0 lead loomed large five seconds before halftime. Smith, as has always been his wont, duly slipped the knife in.

A similarly desperate play to Cleary’s, this time from Api Koroisau, saw the ball fall from Smith’s hands on Penrith’s line.

Due to the Panther’s dislodgement, Smith was well within his rights to fall on the football and claim the killer blow, the timing just as cruel as the tone it landed in.

Soggy scenes all day were reminiscent of the last time Penrith were present for a decider in 2003.

But the comparisons stopped there. From the outset, Melbourne were a class above.

As good as they were, Penrith provided plenty of favours, starting in the fourth minute.

Tyrone May was parachuted once more into Penrith’s starting line-up, and immediately found himself the centre of attention when he needed a hole to crawl into.

With the Storm’s first attacking foray a superbly slick one, Josh Addo-Carr’s final pass in-field put Justin Olam over the line and the ball just six inches from it.

May’s slide into defensive position, with his boot knocking the Steeden loose en route to the turf was deemed a penalty try.

Penrith’s return of serve had venom to it. Only a mistimed decoy run by Stephen Crichton saw Josh Mansour unable to answer with a four-pointer.

But repeated fumbles from Viliame Kikau preceded an accidental offside penalty from the Fijian, then a late shot from James Fisher-Harris, that gave the Storm ample breathing room.

By the time they had truly spread their wings, it was 22-0 and halftime.

There was no respite afterward either.

Ryan Papenhuyzen dummied on his own 20-metre line. Beat Cleary on his outside by the 30 and was being sized up for sky blue by sideline eye Brad Fittler as he crossed the tryline.

The most dubious of late salvo tries went to Brian To’o despite Isaah Yeo running behind one of his teammates in the lead-up.

It was followed by another from Crichton, making for a 26-12 ballgame with 10 to play.

Pandemonium then ensued. First Hughes was pinged for a professional foul, taking out Kikau as he chased a kick.

Mansour got his grand final try, with a brief period of calm to follow.

Brandon Smith then joined Hughes on the sidelines as Cleary stepping past Cameron, then powering through Papenhuyzen with 11 seconds on the clock.

“I’d love to have the game again tomorrow, that’s for sure,” Ivan Cleary said.

“We turned over too much possession too often, and we were trying too hard in the second half. It was hard to believe we were 22-0 at half-time.

“We were still swinging at the end of the game so I was really proud of the boys.”

For all of Penrith’s pluck and pride though, this game belonged to the Storm.

And none have had more influence in Melbourne than the two old stagers with almost 100 years of rugby league royalty between them.