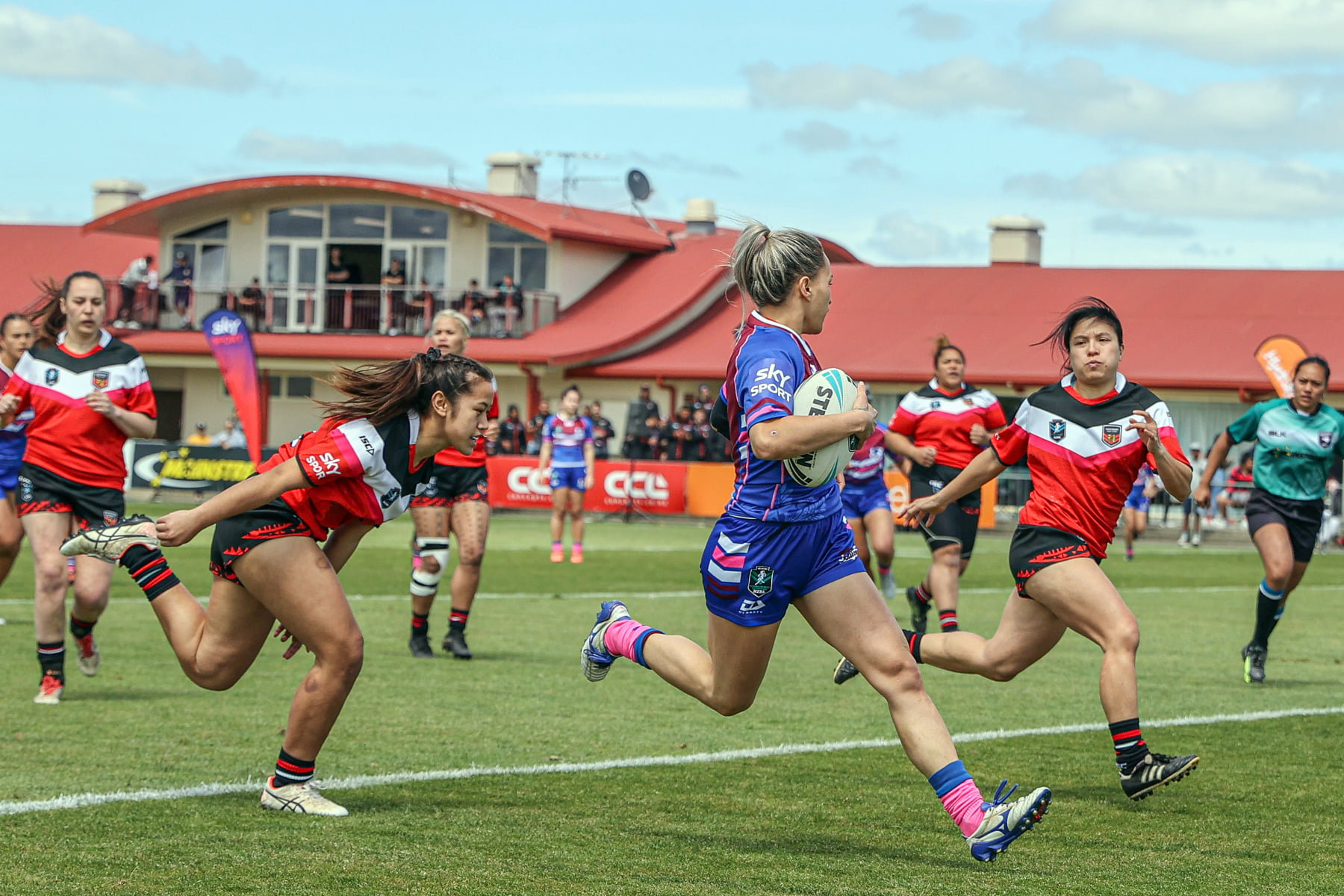 c secure a spot in the final with a decisive victory over Canterbury in what was a must-win for the home team.

A knock-on from the kick-off by Canterbury wasn’t the start they were looking for in their final round robin match-up.

Akarana found themselves with a chance to score in the first few minutes and came up successful with Apii Nicholls slicing through the gap to put the first points on the board for the home team, 4-0.

Canterbury look determined to clap back with some great demonstrations of physicality, most notably a tackle by their winger, Olive Tapu dubbed the best tackle of the competition so far.

Although unsuccessful minutes earlier, Woodham-Enosa pins her ears back and steams down the left wing in a 70-metre try for Akarana’s second try – her team no doubt happy to have her back on the field after she missed their Counties Manukau encounter the previous week (10-0).

Leading 10-0 with two tries on the scoreboard, Akarana looked to have found their shape pushing the ball out wide on several occasions to test Canterbury’s defense.

The home team’s momentum was halted by a break from nippy fullback Michelle Wong but instead of passing to her winger, was wrapped up by Kiwi Fern international Apii Nicholls.

A try from Clementine Varea followed by another from Sharleze White off the back of Fotu-Moala’s fantastic run and a quick play-the-ball, sees Akarana posting a 22-0 lead. And it wasn’t long before the Richmond’s Rowena Meleisea joined the list of try-scorers taking the pass from Nicholls to score on the wing.

Racking up the points at almost a point a minute, Akarana’s Sharleze White scores her second of the match taking the inside line and backing herself to crash through a tiring Canterbury defense.

Not many will argue with the ‘best try of the match’ going to Clementine Varea. She continued her dominant form bumping off four Canterbury players from the restart to score the final try of the first half, converted by Hansen just before the halftime whistle. Akarana run into the sheds leading 36-0.

In the early minutes of the second half, Laishon Albert Jones was hot on attack crashing over the line for the first try of the second half – a try that was closely followed by all-class, Apii Nicholls whose footwork eluded Canterbury’s defense once again.

Despite moments of individual brilliance from the home side, the next four-pointer was a team effort with Woodham-Enosa putting the ball down, Akarana’s combinations proving too strong for the Cantabrians – 50-0.

Minutes later, Hansen was given the chance to convert her own try to push the score out to 56-0.

After Akarana posted their 12th try, Canterbury’s moment of the match came at the hands of Tauasa-Pauaraisa as she planted a well-deserved try putting the South Islanders on the board in the final five minutes of the game.

The Akarana Falcons will play Counties Manukau’s Stingrays in the Women’s Premiership final.